Please ensure Javascript is enabled for purposes of website accessibility
Log In Help Join The Motley Fool
Free Article Join Over 1 Million Premium Members And Get More In-Depth Stock Guidance and Research
By Eric Volkman - Feb 22, 2018 at 10:30AM

It's the top payment card brand in the world, but its shares aren't exactly cheap.

Last year I unhesitatingly tagged the stock of the world's top payment card processor Visa (V -1.31%) as a buy based on strong quarterly results and a set of trends that favor its continued growth. I felt that the shares were still a good deal, despite a blast of popularity that saw them rise by 35% year-to-date.

Since then, the stock has climbed still higher, even in the wake of the recent market turbulence. Let's dive into whether it's still worthy of investment after that run. 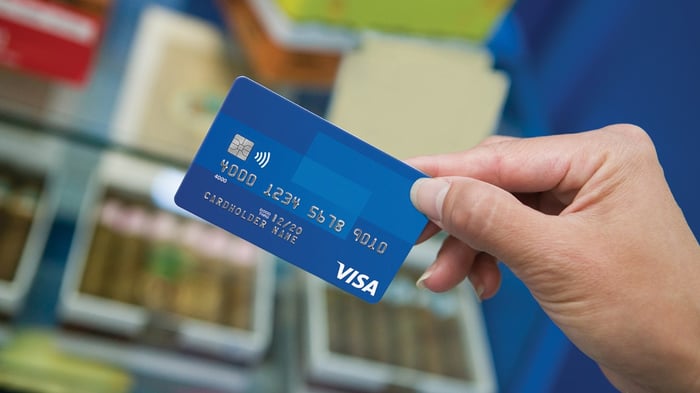 The power of plastic

In terms of fundamentals, Visa continues to perform above expectations. Its Q1 of 2018 saw it post revenue that was 9% higher on a year-over-year basis (at $4.86 billion), with adjusted net income coming in 23% higher at $2.54 billion. This felt familiar; all quarters of fiscal 2017 featured strong growth on both the top and bottom lines, with numbers that topped analyst estimates.

Card payment companies are doing well these days due to a variety of factors. The first is a global economy that is in pretty good shape; as with most financial sector companies, cards do well when consumers spend more. Another major one is a global shift away from cash payments to those made by alternate means like credit or debit cards.

On top of that, Visa complements its core business with acquisitions; a particularly large and important one was its 2015 acquisition of the massive Visa Europe (once a separate entity due to a few historical quirks).

And let's not forget the occasional big score on the client side, such as its selection as the new sole credit card brand accepted at Costco Wholesale registers and the co-branding partner of the retailer's proprietary credit cards.

These factors also help explain the similar overperformance of Visa's arch-rival Mastercard (MA -2.20%). Like its much larger competitor, Mastercard has seen sharp increases in transaction volume, net revenue, and bottom-line profitability of late. That company's recently reported Q4 of 2017 featured a 20% expansion of the top line on transaction volume that rose 17%. Adjusted net profit, meanwhile, grew a hearty 28%.

Strong results are all well and good, but they aren't enough to put a stock in the "buy" basket. Pricing matters too. As previously mentioned, Visa's shares have risen -- by almost 16% -- since my previous article on this topic.

That leaves the stock valued at a one-year forward P/E of nearly 28, only slightly above what both the company and analysts are generally expecting for EPS growth from fiscal 2017 to 2018. Past that, however, prognosticators still expect the bottom line (and revenue, while we're at it) to continue rising -- they're anticipating an 18% increase for fiscal 2019.

All of these numbers are more or less in the same ballpark for Mastercard, by the way.

In other words, even though Visa isn't as much of a bargain as it once was, it's still a pretty good deal given the company's potential. People all over the world are paying with plastic more, and with its size and scope Visa is often the plastic they're paying with. The company's stock is still a buy for me.