Video game companies and well-known brands are going all-in on a growing global market that is about to double in size.

Esports is older than you might think. There's been an active competitive gaming scene for years, in which Activision Blizzard's (ATVI 0.91%) Starcraft has been a staple since its release in 1998. But in the past few years, interest in esports has boomed. The global spectator audience for esports is on pace to reach nearly 600 million by 2020.

This will be the first year that all three U.S.-based game publishers -- Activision, Take-Two Interactive (TTWO 1.90%), and Electronic Arts (EA 0.89%) -- have their own esports leagues taking the stage, making 2018 arguably the biggest year yet for the fast-growing esports market. 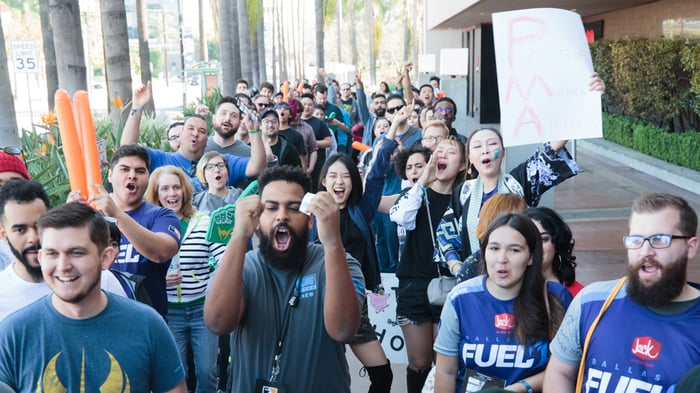 Activision's Overwatch League has given fans plenty of excitement so far in 2018. IMAGE SOURCE: OVERWATCHLEAGUE.COM.

Esports represents a significant opportunity for top video game companies to potentially grow revenue through advertising, sponsorships, and consumer products, in addition to growing the player base for certain games.

Up until now, esports has mostly been about small tournaments that award a big cash prize to the winner. But lately, because the esports worldwide audience is getting so massive, video game companies are considering esports more seriously as something that could grow into a stand-alone business.

EA and Take-Two own the best-selling sports games in the industry, and they are a natural fit for esports. Over the past few years, EA has created esports events for FIFA and Madden, in which EA is partnered with both the NFL and FIFA, the international governing body of soccer, to support the growth and marketing of EA's Madden NFL Championship Series and the FIFA eWorld Cup. EA will also be launching an esports event for its popular Battlefield franchise later in 2018.

Likewise, Take-Two is set to launch the NBA 2K League in May based on its top-selling basketball franchise, which will be owned and operated by real NBA teams. The backing of the NBA gives the NBA 2K League the marketing muscle to potentially grow the franchise over time.

Activision has made the most ambitious effort in esports to date with Overwatch League, which just got under way in January. Overwatch League is unique in that, being a shooter and not a sports game, it functions similarly to a real-world sports league, with player salaries and benefits, and it features a six-month regular season followed by playoffs and a championship, and all-star game.

Big brands are jumping on board

Real-world sports leagues are eager to partner with EA and Take-Two because they see esports as an extension of the actual sports leagues, especially since Madden, FIFA, and NBA 2K are officially licensed products of the NFL, FIFA, and NBA. Therefore, the growth of EA's and Take-Two's esports events potentially represents growth potential for those legacy sports leagues, as well. Recently, NASCAR expressed plans to start using esports to identify new racing talent as well as to attract new, younger fans.

In addition, major brands are investing alongside game companies as sponsors, as they see an opportunity to reach the millions of millennials who watch esports. EA recently announced a partnership with ESPN and Walt Disney for exclusive broadcasts of the EA Sports Madden NFL 18 Club Championship. Activision's Overwatch League has gained sponsors from well-known brands such as Toyota, T-Mobile, HP, Intel, and Sour Patch Kids.

Until now, the esports market hasn't had this level of investment from various interests, ranging across game companies, brands, media, and real-world sports leagues. This provides esports with a solid financial ecosystem it hasn't had on this scale before, potentially producing a positive cycle that encourages more investment and more esports events from video game companies. That, in turn, could stimulate more time spent in games from gamers, generating additional revenue from in-game spending.

For these reasons, 2018 is looking like a launch pad for the esports market to grow into a significant revenue generator for game companies, not to mention providing millions of gamers a thrilling new outlet where they can completely nerd out.