Please ensure Javascript is enabled for purposes of website accessibility
Log In Help Join The Motley Fool
Free Article Join Over 1 Million Premium Members And Get More In-Depth Stock Guidance and Research
By Matthew Cochrane - Feb 23, 2018 at 7:13AM

In an industry that has taken off, First Data has somehow managed to struggle. Amid optimistic signs, is a turnaround imminent?

Riding the tailwinds of the digitization of money around the globe, several payment processing companies have enjoyed big stock price advances over the past 12 months. Square has led the charge, with incredible gains of over 204%, but it is far from the only company in this sector that crushed the S&P 500 index during that time frame. Total System Services, Global Payments, and Worldpay all easily beat the market as well.

Almost alone in this sector in faltering is First Data Corp. (NYSE: FDC). Not only did it fail to beat the market over the trailing 12 months, but it also failed to even make a gain. That's right: In a year when the market advanced over 16%, First Data declined 4.3%. Ouch! 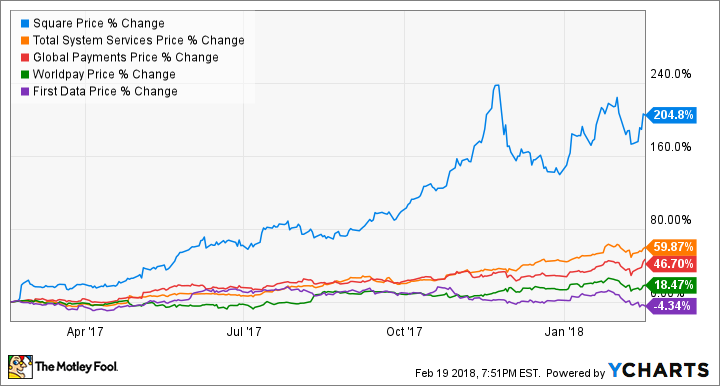 Yet there might still be hope for First Data shareholders. When the company reported its fourth-quarter earnings earlier this month, it showed that total revenue increased to $2.13 billion, a 7% year-over-year increase, and its adjusted earnings per share increased to $0.44, a 13% increase year over year. The stock bounced around after reporting its earnings, but after reading through the company's conference call transcript, I think there could be two reasons for shareholders to harbor some cautious optimism, with one risk still overshadowing the company. 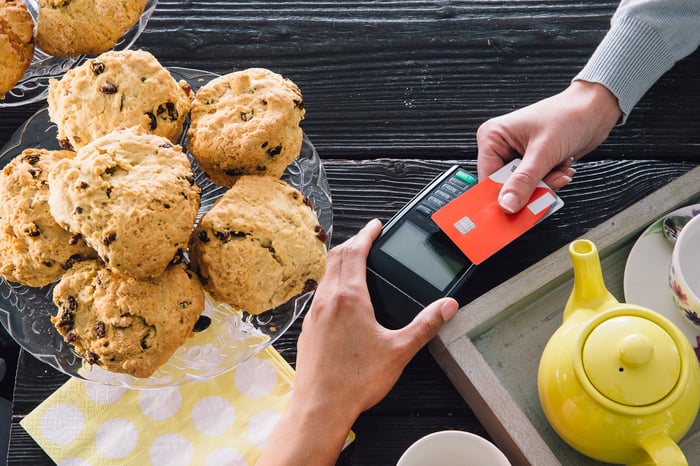 Credit card payments continue to increase, even in developed economies such as the United States. That's a trend that should benefit the entire payment processing industry, including First Data Corp. Image source: Getty Images.

Clover is First Data's comprehensive, cloud-based point-of-sale (POS) payment platform. One of the advantages to a system like Clover is that it is open-architecture, meaning third-party developers can write apps that can be used on the system. These apps allow employers to perform tasks such as integrating employee schedules or payroll with Clover or exporting payments data to accounting software. These apps not only benefit First Data directly through revenue-sharing agreements, but also indirectly help First Data retain customers that become reliant on Clover to run their businesses.

First Data now has 400,000 Clover units installed, excluding Clover Go, a dongle that can be plugged into a smartphone and used as a POS terminal. Including Clover Go, there are 750,000 active Clover stations. First Data is processing about $50 billion of payment volume annualized through Clover, a whopping 50% increase year over year.

Last summer, in an effort to jump-start growth, First Data acquired CardConnect for approximately $750 million. CardConnect is a technology commerce solutions platform with features like real-time transaction management, the ability to accept payments via a mobile app from other mobile devices, customized reports, regulatory compliance management, and encrypted and tokenized transactions. Before the end of 2017, First Data would follow up the CardConnect acquisition by acquiring BluePay for $760 million. The BluePay acquisition was made with the intent of beefing up its capabilities in card-not-present transactions, or e-commerce.

During First Data's fourth-quarter conference call, CEO Frank Bisignano said the two companies were acquired because they were "the two premier stand-alone properties in the integrated space." He added that both were "deep into the integration process" and saw "strong revenue growth" in the fourth quarter.

"We firmly believe that our ISV offering -- which combines robust solutions for both card-present and card-not-present, simple integration, and a state-of-the-art partner management tools for ISVs -- is second to none, and we believe we can build on this competitive advantage as we layer in the Clover platform into our ISV offering, further differentiating First Data's technology stack for our integrated partners and providing additional distribution opportunities for the Clover platform."

While these results do sound promising, there are still reasons to be skeptical, the biggest being First Data's mountain of debt. At the end of 2017, First Data's net debt stood at $18.6 billion, a $445 million increase from the end of 2016. Incredibly, that's about $4 billion more than First Data's market cap!

In response to an analyst's question, Bisignano said the acquisitions of CardConnect and BluePay were too beneficial to First Data's competitive positioning to pass up, but that they only represented "a pause" in the company's efforts to deleverage. The good news is that because of the refinancing of some of the debt, First Data will actually pay about $10 million less in interest expenses this year, even after the additional debt stemming from the acquisitions. Patel said that the company is projecting about $1.4 billion in free cash flow in 2018, which will be used to pay down debt.

I do think First Data is beginning to move in the right direction. The Clover platform seems to have real momentum behind it, and there doesn't appear to be any doubt that CardConnect and BluePay tremendously bolstered First Data's suite of product offerings.

That being said, I would still not initiate a position in the company. For starters, I would wait to see greater revenue growth. While the 7% year-over-year increase was better than the anemic growth it previously showed, it still pales in comparison to the growth of its peers. Finally, First Data's debt will hang around the neck of its stock price for years to come. Any gains will be an upward slog because of it.

Considering that payment processing companies are riding huge macro trends, such as electronic payments and the digitization of money, First Data's top- and bottom-line growth should be much higher. For investors looking to capitalize on these trends, consider the companies that have been winning in this space lately, like those mentioned at the beginning of this article. For now, First Data still doesn't deserve much more than a first look.