You may have heard the term "blockchain" used when people talk about cryptocurrencies like bitcoin. If you're unsure of what it means, think of blockchains as ledgers that keep track of transactions. In the case of bitcoin, the blockchain is a record of financial transactions between parties. The blockchain is decentralized, meaning that no one is in charge of it, and the data isn't owned or stored by any one company, but rather dispersed across many computers.

Blockchains can be used for much more than just keeping track of cryptocurrency transactions though, and a handful of companies are figuring out how to benefit from the technology. Let's take a look at what these companies are doing. 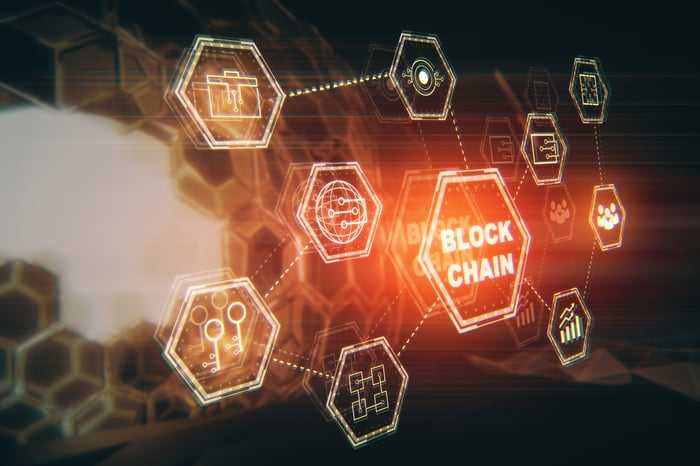 Microsoft (NASDAQ:MSFT) and Accenture recently teamed up to create a prototype ID system for a United Nations project aimed at providing legal identification to more than 1 billion people in the world. This blockchain-based ID would be especially useful for refugees who have left their home without any official paperwork. The idea could potentially be used for anyone though, to allow travelers to access their personal information anywhere.

2. Not many IT industry leaders are implementing blockchain just yet.

Just 13% of senior IT leaders say that they have a clear plan to use blockchain for their business, according to a survey by IDG Connect.

3. It could save banks billions of dollars.

American Express (NYSE:AXP) has already implemented a technology created by a company called Ripple that allows some of its international transactions to be processed through a blockchain. It speeds up the process and makes an international transaction instantaneous, as opposed to taking several days. Banks could save $8 billion or more per year if they used the tech for their transactions, according to Accenture.

Accessing your own medical records can be a difficult thing to do because your records are spread among many different medical professionals, doctors' offices, and hospitals. But some companies, like Israel-based Proof Work, want to create a blockchain where patients can easily access their own personal medical records without having to contact any doctors' offices. This would give patients more control of their own records and make it easier for them to track their own health.

5. Blockchains can help with food recalls.

Walmart (NYSE:WMT) has started using blockchain technology to track where mangos, berries, and some other products come from so it can determine where bad food originated during a recall. The company is working with International Business Machines (NYSE:IBM) to track the food, and in one test Walmart was able to determine where bad food came from in just two seconds, as opposed to results taking nearly a week under their current system.

6. The Internet of Things (IoT) could thrive using blockchains.

IoT devices are expected to reach 50 billion by 2020, and all of those devices need to be able to exchange information easily with each other and offer their users a certain level of security. IBM says that its Watson IoT Platform can track packages in a supply chain, update where they are and even what temperature they're stored at, and allow companies to easily check on shipments in real time.

The blockchain market was worth about $317 million in 2015, but it's expected to grow to $20 billion by 2024, according to Transparency Market Research.

While blockchain is still nascent, IBM has been an early adopter in this market. The tech titan is already working with about 400 companies to implement the technology into their businesses already. IBM has contracts to work with seven major banks on their blockchains and is also collaborating with grocers like Kroger to employ blockchain in their food supply chains. The technology still has a long way to go before it's widely adopted, but IBM's efforts are a clear example of how even legacy technology companies are taking notice of this growing trend.