There's a lot of up-front investments when it comes to shipping furniture.

It's like deja vu. Three months ago, after Wayfair's (W 4.04%) third-quarter earnings release, I wrote:

Shareholders of Wayfair got a rude wake-up call on Thursday. The home furnishings e-tailer's ... earnings report showed very strong sales growth ... but the lack of any signs toward profitability -- in fact, a widening of losses -- caused Wall Street to sour on its prospects. Shares of the company were down by as much as 20% after earnings were released. 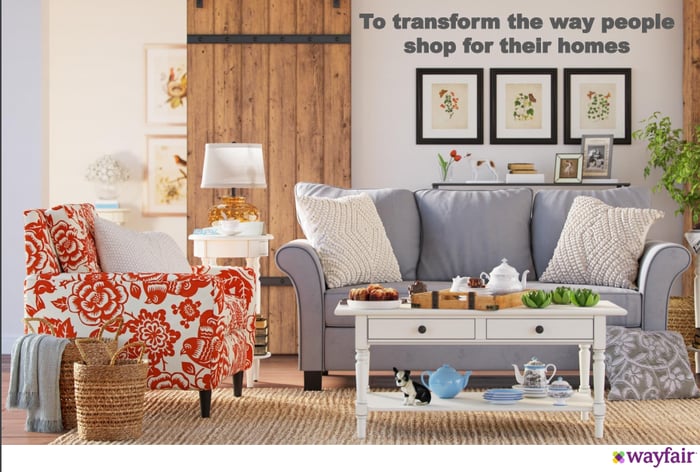 Before diving into the nitty-gritty details, let's have a look at the headline numbers for the quarter.

It's not hard to see why investors were disappointed. Sales were booming during the holiday quarter -- showing that the company is clearly gaining traction with customers who are looking to order furniture online. But the bottom line was not encouraging.

"Across North America and Europe, we continue to expand the footprint of our Wayfair Delivery Network and CastleGate, offering faster and more seamless delivery across more products and regions than ever before," said CEO and co-founder Niraj Shah.

That expansion doesn't come cheap. During the fourth quarter, Wayfair spent $25 million on property and equipment capital expenditures, and $12 million on site and software development.

This doesn't mean that the company has an impenetrable moat: Amazon.com is the 800-pound gorilla that has an even more extensive fulfillment network that could quickly rival -- and undercut -- Wayfair. And if Walmart ever wanted to enter the game, it would have potential as well.

That being said, these investments do provide protection from upstarts rivaling Wayfair's business model. Smaller companies would have to spend a fortune to match Wayfair's delivery capabilities and shareholders would likely be able to see such competition coming long beforehand.

There are a number of critical metrics I've longed tracked to measure the underlying strength of Wayfair's business. The company showed healthy progress on all of them.

In essence, Wayfair continues to win over customers and keep them coming back. That's not the surest sign of an impenetrable moat, but it's the closest thing that Wayfair can offer investors at this point, and it has consistently trended in a positive direction.

It's also worth noting that international direct revenue jumped 91% to almost $200 million in the quarter, and accounted for 13% of all revenue for Wayfair. Investors should expect continued heavy investments, especially in the company's effort to push into the U.K. and Germany.