Please ensure Javascript is enabled for purposes of website accessibility
Log In Help Join The Motley Fool
Free Article Join Over 1 Million Premium Members And Get More In-Depth Stock Guidance and Research
By Eric Volkman - Feb 23, 2018 at 10:45AM

This enduring rivalry has gotten a lot of press over the years, so I won't dive into it much here. Instead, as a longtime income investor, I'm interested in the current state of their businesses, and more pressingly how their respective dividends compare. Both, after all, are Dividend Aristocrats of long standing. Crack open a bottle with me as I explore which of the two payouts is preferable, and why.

In recent years, the two giants have taken somewhat different paths, with PepsiCo building an impressive portfolio of snack and food brands, and Coke sticking resolutely to beverages. They still compete head-to-head in a number of beverage categories, particularly soda, but the "Cola Wars" -- in which they would directly attack each other in their marketing -- are well in the past.

Times change, and the average American isn't necessarily eager to quaff a Diet Coke or grab one of the tasty snacks from PepsiCo's Frito-Lay. Consumer tastes in this country have shifted to food and beverage products that are healthier and more natural, or at least give the impression of being so.

Of the two, Coke has lately done better at improving its top line in the face of these headwinds. Although its adjusted per-share net profit slipped by 1% on a year-over-year basis in fiscal 2017, organic revenue notched a 3% increase, even despite flat-lining volume sales.

The company has therefore gotten more bang for its buck with pricing. In a conference call discussing the results, CEO James Quincy said that smaller yet higher-margin cans with its products have proved to be popular. Coke plans to continue its efforts with these downsized offerings, some of which feature offbeat fruit flavors. 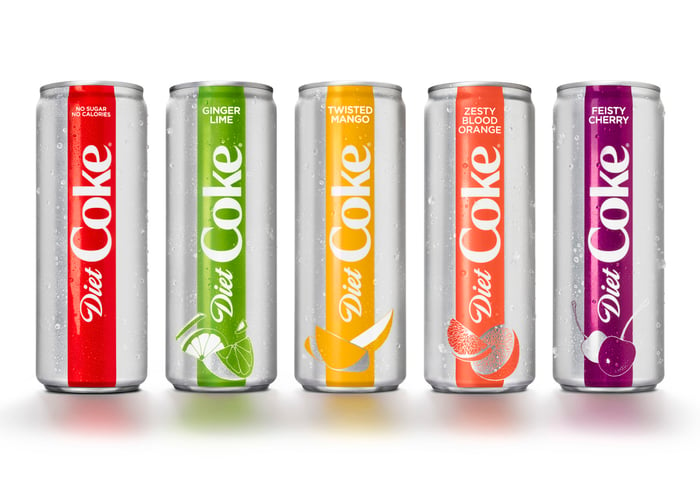 PepsiCo's 2017 was a struggle. Beverage volumes were down in three of the company's four global regions, including the most crucial one, North America. In all, drink volumes slid by 1% for the company.

Luckily, it has those delicious snacks in its portfolio, which in contrast to the liquid goods saw improvements in three of the four regions, offsetting the beverage declines. As a result, PepsiCo's overall organic revenue rose, although not overwhelmingly, by 2% on the year. The company has been in cost-cutting mode since 2015; with the help of slimmer expenses, it managed to lift its adjusted EPS by 8% to $5.23.

Turning our attention to cash flow, we see that PepsiCo's operating and free cash flow (FCF) has held up better than the same metrics for its archrival. Even after a slight dip in the latter, the company had enough in the coffers to pay the dividend and fund a chunk of its share-repurchase program.

Coke's position isn't as strong; FCF cratered by 19% to $5.3 billion, which the company attributed mainly to activities related to its refranchising of bottling operations. That figure fell about $1 billion shy of the year's total dividend payout alone.

Thirsty for a payout

In spite of that, Coke is Coke. It not only has a position as King Soda to defend, but it's also expected to continue doing right by its shareholders by raising that dividend. It's well aware of that, so no matter its cash flow situation or struggles with growth, I'm sure it'll find a way to keep adding to the payout.

Also, considering that the world is turning away from sugar, the company is doing an admirable job growing its business. That's not easy with a portfolio devoted entirely to drinks, many of which contain piles of the sweet stuff.

Boosted by a recent raise by 5% to $0.39 per share, Coke's upcoming quarterly dividend is richer than PepsiCo's in terms of yield. It clocks in at 3.5%, against its competitor's 2.9%.

That difference isn't wide enough on its own to award the prize to Coke in this comparison. What tips this contest in the company's favor is its broader global reach and more powerful brand. These give it better potential, in my opinion, to keep improving its results. PepsiCo, meanwhile, is a company in cost-cutting mode with weaker-performing drink brands.

So while both these dividends are worthy of consideration for income investors, the can I'd reach for would be Coke.