Coke's franchising of bottling operations is paying dividends in the form of higher profit margins.

Coca-Cola's fourth quarter by the numbers

The numbers above are non-GAAP figures so we can look at comparable year-over-year changes. The fourth quarter of 2017 included a net charge of $3.6 billion against GAAP earnings, triggered by puts and takes around new tax rules. On the upside of that item, Coca-Cola plans to take home some $7 billion of overseas cash for the purpose of paying down its debt balances. Long-term debt added up to $34.5 billion at the end of the fourth quarter, including $3.3 billion of papers coming current in the short term.

The bottom-line result was in line with analyst expectations, and Wall Street would have settled for revenue in the neighborhood of $7.36 billion. Coke's earnings figures have been hit or miss in recent quarters, but this was the sixth consecutive revenue surprise. 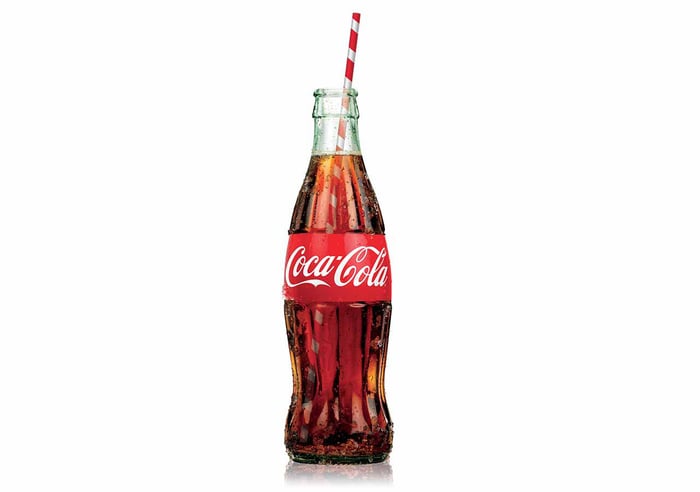 Aside from a 1% revenue decline in the Asia-Pacific region, nearly all of Coca-Cola's geographic business segments reported positive year-over-year sales growth. Latin America led the way with 14% higher sales and a 21% increase in pre-tax income.

The company's top-line sales still fell dramatically due to a 69% smaller contribution from bottling operations. Coke has been unwinding its direct involvement in bottling and distribution in favor of a franchise system, so this was an expected effect. On the upside, the bottling division's pre-tax losses shrank from $1.03 billion to $615 million -- a 40% year-over-year improvement.

The franchising of U.S. bottling operations was completed in the fourth quarter, but more work remains to be done in important markets like China and Africa.

So don't be fooled by the lower revenue. Shipping volumes held steady year over year, including a 1% increase in North America and significant volume improvement in Brazil.

Going forward, Coca-Cola is focusing on higher-margin markets while holding back marketing budgets for low-profit water in a handful of key markets. The company has been trying out this refocusing effort in China, Mexico, and Japan with good results, de-emphasizing bulk water sales in favor of premium water brands, flavored waters, mineral water, and other higher-margin products in that space. Think Smartwater, not Dasani. Other geographies will probably follow suit later on, including North America.

Coca-Cola is achieving its goals here. Lower sales may look scary but operating profits are staying put, so adjusted profit margins rose from 18% to 21% over the last four quarters.

In other news, Coca-Cola also announced its next quarterly dividend, payable at $0.39 per share on April 2. That's a 5.4% year-over-year increase, stretching Coke's streak of annual dividend increases to 56 consecutive years. At current share prices, the new dividend works out to an effective annual yield of 3.4%

All things considered, Coca-Cola continues to run an effective business amid changing consumer markets. While the stock seems fully valued right now, it could be a good choice for investors seeking steady long-term returns and few game-changing surprises.