The meal-kit delivery leader didn't do as badly last quarter as analysts expected, but the numbers clearly show it's not viable as a standalone business.

There was no real reason for Blue Apron (APRN 13.36%) investors to be so enthusiastic about its fourth-quarter earnings report. Although it reported a smaller loss than expected by Wall Street analysts, the meal-kit delivery service continued to hemorrhage customers as it further dialed back its marketing spending.

The harsh reality is that it costs Blue Apron too much money to acquire new customers who ultimately don't spend enough to justify pouring additional resources into retaining them. There may be a future for the meal-kit company -- particularly after the White House proposed replacing a portion of the food-assistance payments that poor Americans receive under the Supplemental Nutrition Assistance Program, formerly known as food stamps, with "Blue Apron-type" food boxes -- but it's likely not going to survive as a standalone business. Blue Apron's best hope remains a buyout. 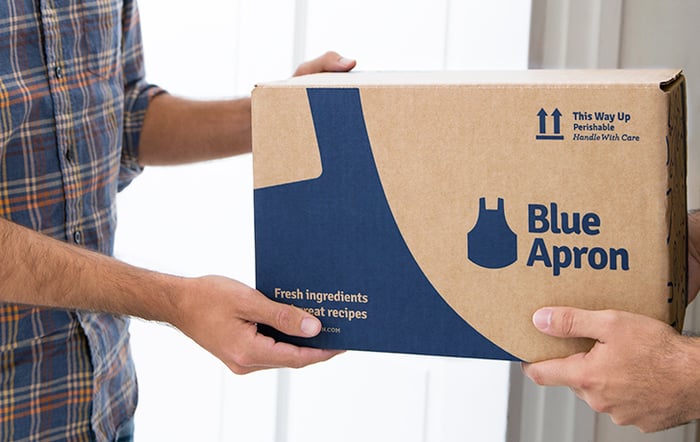 Competition in this niche market is too stiff for Blue Apron to go it alone. When Amazon.com acquired Whole Foods Market, it laid bare for all to see that Blue Apron's competitive moat was extremely shallow, if not nonexistent. A unicorn IPO -- at one point, it looked possible that Blue Apron would be valued at more than $3 billion, based on estimates of a $15 per share offer price -- it ultimately went public at $10 a stub, giving it a still-rich value of $1.9 billion.

Today, the stock trades at less than $4 a share, giving it a market cap of around $630 million, and there's no reason to think its stock will be worth any more than that down the road. In fact, a good case can be made that it could be worth a lot less.

While Blue Apron's meteoric, triple-digit-percentage growth rates were never seen as sustainable, they've now turned negative. Fourth-quarter revenues of $187.7 million were down 13% from last year, while the number of customers it served fell 15% year over year, and was down 13% from the end of the third quarter.

At its IPO, Blue Apron reported that more than 1 million people were buying its meal kits; today, it has only 746,000 customers. Although the company is recording slightly more orders on average, the value of orders is declining.

Though Blue Apron lays the blame for its declining numbers on how much it spends on marketing -- some $25.2 million in Q4, down 32% from last year -- the real problem is that anyone can start up a meal-kit delivery business, and plenty of would-be rivals are doing so. 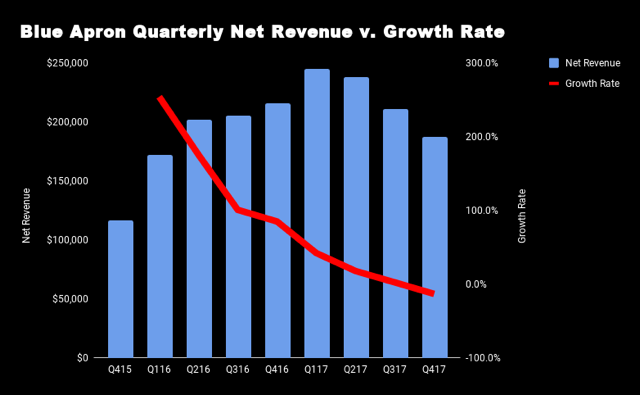 Not a sustainable business

Hello Fresh is seen as the meal-kit delivery service most likely to topple Blue Apron from its throne as the industry leader, as it has been growing while Blue Apron spirals downward, but one analyst sees its situation as even more problematic.

An assistant marketing professor at Emory University examined Hello Fresh's numbers in October, and found it had a six-month customer retention rate of 17% -- even worse than Blue Apron's estimated 28%. In an article on LinkedIn, he asserted that Hello Fresh is growing and stealing market share solely by "spending large and rising sums of money on customer acquisition expenses."

That's the same strategy that Blue Apron has been running away from, and while Hello Fresh says it was able to improve adjusted earnings before interest, taxes, depreciation, and amortization by 59% year over year through a focus on expense management and operational improvements, that also means its customer base will continue to wither away.

It increasingly appears the standalone business model is not viable for meal-kit delivery. The future of the niche appears to rely on existing companies being acquired -- as Plated was by grocery company Albertson's.

Though grocery store chains like Kroger are building their own services from the ground up and expanding into new markets, acquiring an established operation is the easiest path for a retailer to gain a foothold in the space. Earlier this month, analysts began suggesting Walmart would be the most logical buyer for Blue Apron.

Regardless of what company ultimately buys it, Blue Apron needs someone to bail it out. As its valuation continues to dwindle, management should actively pursue a strategic alliance before all of its shareholder value evaporates.