Please ensure Javascript is enabled for purposes of website accessibility
Log In Help Join The Motley Fool
Free Article Join Over 1 Million Premium Members And Get More In-Depth Stock Guidance and Research
By Daniel Miller - Feb 26, 2018 at 7:17AM

Like many stocks right now, these two aren't cheap. But investors should watch for an opportunity to jump in.

Walmart (WMT -0.37%) and Ritchie Bros. Auctioneers (RBA 1.68%) won't show up on many dividend stock screens, with yields at roughly 2%, but both have a lot to offer investors. Walmart has gained traction with its e-commerce strategy, and Ritchie Bros. has also expanded its online prowess to become a massive global auctioneer. Savvy investors would be wise to watch and see if shares of these two dividend stocks go on sale in the near future.

Walmart remains the massive retail juggernaut that it's been for decades, but the company has proved it can adapt to changing times when many investors doubted its ability to compete with emerging online retailers. At a time when many brick-and-mortar retailers are struggling, there's no such struggle at Walmart, which is partly why its price-to-earnings ratio stands at 26, according to Morningstar.com estimates. But if Walmart goes on sale, you'd be wise to snap up this dividend stock currently sporting a 2% dividend yield.

Why jump on board this global retailer if it goes on sale? Growth, for one thing. It may be difficult to believe that Walmart, which took in roughly $485 billion in 2017 revenue, has much room to grow, but it does. Let's start with its e-commerce story, which is gaining real traction. In fact, Walmart's e-commerce sales grew 50% during the third quarter, proving its $3.3 billion acquisition of Jet.com to be a complete success.

In addition to Walmart's path to growth via e-commerce, it's making important investments in China and India, even though the number of stores it has there remains a small fraction of its count in the U.S. market. Walmart faced tough competition and early challenges in China, but it has since developed a partnership with Tencent (TCEHY 1.64%) and JD.com (JD 0.48%), which will enable cross-promotions and could boost business.

Walmart, meanwhile, opened its first store in India in 2009 and operates only a handful of stores under the Best Price brand. But if it can eventually crack the doors of these massive markets and ignite its international growth along with its current e-commerce success, this is absolutely a stock to buy if it goes on sale. After the recent drop in the share price, I think that moment might be coming soon.

Ritchie Bros. Auctioneers is trading at a pretty lofty price-to-earnings multiple of 53 -- and a forward price-to-earnings multiple of 32, according to Morningstar.com. But that's not the entire story. The world's largest auctioneer of used industrial equipment has pointed to integration problems with its otherwise brilliant IronPlanet acquisition. Those woes cost the company on the bottom line, sending earnings per share down $0.11 to $0.09 per share during the third quarter -- part of the reason the company trades at such lofty valuations. However, it currently offers a 2.1% dividend yield, which could grow even more enticing if short-term headwinds cause a sell-off. 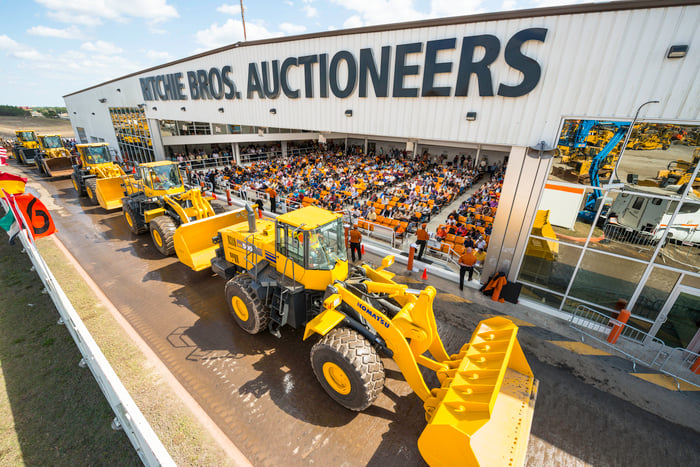 The integration hiccup isn't the only short-term headwind the company faces. Management noted that a strong 2016 auction market made for tougher comparisons, and the market for used equipment had softened a bit recently. If those factors bring a slight sell-off, it could be a great time to jump in as the company works through its integration woes. The main hurdle to jump will be better training its salesforce to cross-sell IronPlanet and Ritchie Bros. products and services.

Further, management plans to deliver total run-rate cost synergies of $20 million by the end of this year, through optimization of its auction sites, technology infrastructure, and operational efficiencies. Through 2017, management had focused on generating about $10 million through various SG&A efficiencies only.

If Ritchie Bros. can smooth out the bumpy road and finishes integrating IronPlanet, boosts sales through cross-selling, and continues to ramp up its online reach, this will be a great stock to pick up if short-term headwinds send the stock lower by even a relatively small amount.