Please ensure Javascript is enabled for purposes of website accessibility
Log In Help Join The Motley Fool
Free Article Join Over 1 Million Premium Members And Get More In-Depth Stock Guidance and Research
By John Rosevear - Feb 26, 2018 at 9:05AM

Most of GM's crossovers have done extremely well -- but not all.

GM said the compact Buick Envision will get a new face and new rear-end styling that brings it more into line with other Buick models, starting with the 2019 model year.

The Envision's overhaul is a part of a larger GM effort to take best advantage of American and Chinese car-shoppers' huge appetite for crossover SUVs, which in turn is a key part of CEO Mary Barra's push to improve GM's profit margin.

That makes it important. Here's what we know. 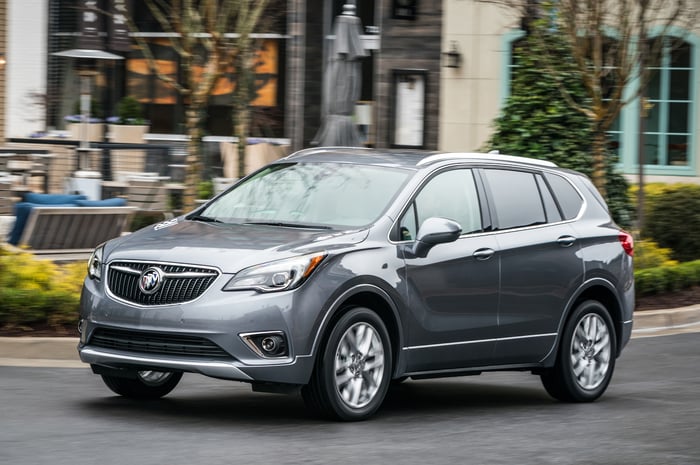 The Buick Envision gets a new face for 2019 -- and a long list of subtle improvements under the skin. Image source: General Motors.

Why GM is revamping the Envision

At first glance, GM's revamp of the Envision seems premature: The compact Buick has only been on sale in the U.S. for about a year and a half.

But the Envision was first launched in China in 2014. And while GM's U.S. sales of crossovers have surged in the past year, powered by a slew of new and revamped models, the Envision has lagged the pack.

One possible factor in the Envision's relatively sluggish sales: It was originally designed for the Chinese market, where buyers in certain market segments seek a smooth, plush ride. The Envision has sold very well in China, but that old-school plushness may be holding it back here: Reviews in the U.S. have tended to describe the Envision's handling and braking with words like "soft," "mushy," and "clumsy" -- not compliments.

What's new about the 2019 Buick Envision

GM has been reading the reviews and listening to owners. The Envision's chief engineer, Elizabeth Pilbosian, said many of the changes made to the SUV for 2019 were driven by feedback from U.S. customers. Among them:

There's one more big change, and it's an interesting one: GM lowered the 2019 Envision's starting price by $1,005, to $32,990. Company officials said the pricing change is part of a larger strategy to position the Envision as a next-step-up model for owners of the small Encore SUV.

That's important, because the Encore is far and away Buick's best seller in the U.S., and it's also a model that brings a lot of new buyers to GM for the first time. About 60% of Encore customers come from non-GM vehicles, according to the company's data. Right now, roughly half of Encore owners say they are likely to buy another Buick SUV. The changes to the Envision are clearly part of GM's effort to boost that number.

What about the made-in-China thing?

The Envision was the first GM vehicle to be imported to the United States from China, something that caused a stir when the car was first announced. But it seems like a non-issue now: The build quality of the Chinese-made Envisions has been high, and reliability has been in line with other GM products.

Your humble Fool hasn't seen any evidence showing that the Envision's made-in-China origins are holding back buyers, and I've been watching for it. 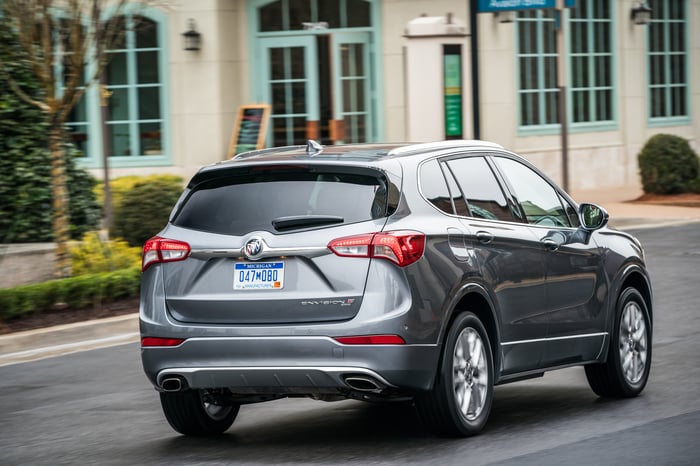 Why it's important: Crossovers are powering GM's profits now

GM executives credited the company's revamped crossover lineup with a big role in generating its all-time-record earnings per share in 2017. In January, CFO Chuck Stevens said he expected the crossovers to power further profit gains in 2018:

In total, we expect crossover volumes to be up about 70,000 units in '18 versus '17, generating roughly $0.5 billion of incremental profit in that one segment alone.

During GM's fourth-quarter earnings call, he elaborated on that point, saying that the new crossovers should help GM sustain strong margins in North America 2018 even if the U.S. new-car market starts to slip from its cyclical peak:

In North America, we expect to sustain an EBIT-adjusted margin of 10% plus primarily due to continued strength of the U.S. industry, favorable mix due to a full year of new crossovers, the launch of our all-new full-size trucks and a continued focus on overall cost savings.

A note that "EBIT-adjusted" is GM's non-GAAP expression of earnings before interest and tax. It's essentially operating income minus one-time items, and with some other small adjustments to account for the way interest is tracked in GM's corporate structure. It's the metric that GM management uses to assess the ongoing performance of the company.

Simply put, GM is in a happy situation: It has a full line of mostly well-regarded crossovers at a moment when demand for crossovers is surging in both China and the United States.

GM's changes to the Envision for 2019 are refinements aimed at keeping more of its newest customers around -- and at broadening the appeal of a model that hasn't quite lived up to its potential.