Please ensure Javascript is enabled for purposes of website accessibility
Log In Help Join The Motley Fool
Free Article Join Over 1 Million Premium Members And Get More In-Depth Stock Guidance and Research
By Steve Symington - Feb 27, 2018 at 8:00AM

The online education platform leader ended 2017 on a high note, but it's only just getting started.

2U Inc. (TWOU 4.08%) announced better-than-expected fourth-quarter 2017 results on Monday after the market closed, highlighting sustained momentum for both its domestic graduate program (DGP) and its GetSmarter short-course business, as well as its first-ever international graduate program (IGP).

Let's put on our reading glasses to get a better look at how the online education platform specialist capped the year, as well as what investors can expect from the company in the coming semesters. 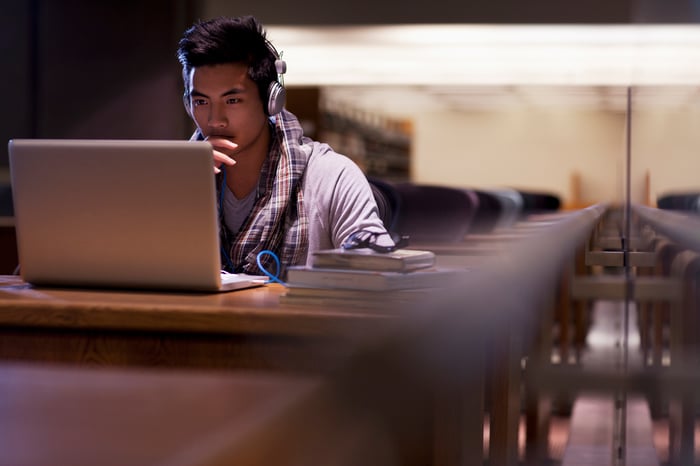 A decade into our journey, 2U is now at the forefront of the digital transformation in higher education and the strength of our business performance and the high-quality student outcomes in our partner programs prove it," said 2U co-founder and CEO Chip Paucek. "The positive momentum in our GetSmarter short course business combined with the organic growth in our graduate program business produced strong fourth quarter and full-year 2017 financial results and sets us up nicely for 2018."

Finally -- noting that cost seasonality tends to reduce margins in the first half of each year while improving margins in the second half -- 2U expects full-year revenue of $397.7 million to $402.7 million, and an adjusted net loss per share in the range of $0.14 to $0.10. Though we typically don't pay close attention to Wall Street's demands, consensus estimates predicted a 2018 adjusted loss of $0.13 per share on lower revenue of $394.8 million.

Of course, 2U shares have also more than doubled over the past year leading up to Monday's close. So it remains to be seen how the market will react to its report on Tuesday.

But 2U just extended its habit of overdelivering (relative to guidance) to end 2017, then followed with a more ambitious view of the year ahead than investors were expecting. 2U's core domestic graduate program segment is thriving, its new short-course business is gaining traction, and -- just as management suggested last quarter -- it signed its first international graduate program with a launch slated for next year. What's more, 2U struck a partnership with WeWork that promises to not only cater to its existing customer base but also expand its reach to hundreds of thousands of prospective new students around the globe.

Put simply, I think long-term investors should be more than pleased with 2U's performance today.