The market's recent dip brought a few big pharma stocks down to an attractive level. Which is best poised to grow its payout further?

It's no secret that investing in dividend-paying stocks is one of the best ways for everyday investors to create an income stream large enough to make their retirement dreams a reality. Merck & Co., Inc. (MRK 1.23%), Pfizer Inc. (PFE 3.00%), and AbbVie Inc. (ABBV 1.93%) all offer yields of 3.2% or higher right now. With the average stock in the benchmark S&P 500 index paying just 1.8%, these big pharma stocks are far too attractive to ignore.

Of course, a juicy yield today won't help you accumulate much wealth if the payout doesn't grow. Let's look at what's driving profitability for these pharmaceutical giants to see if they can keep boosting payouts over the long run. 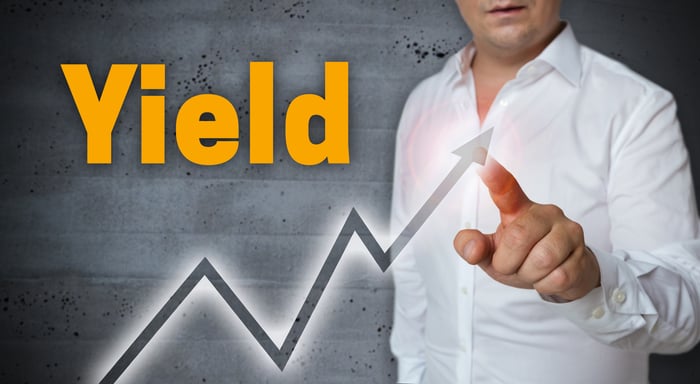 This stock's fallen around 11% since the company withdrew its European application for Keytruda plus chemotherapy as a first-line treatment for metastatic non-small cell lung cancer late last year. As a result, the stock offers a fairly attractive 3.5% dividend yield at recent prices.

First-line indications are highly coveted because these patients tend to stay on therapy much longer than those that relapse following their first treatments. Approval for a similar lung cancer indication in the U.S. helped Keytruda sales jump 172% last year to $3.8 billion, but hopes of a similar surge across the Atlantic are fading now that the company could lose the first-mover advantage.

Merck soothed some concerns by publishing data from the Keynote-189 trial, which is intended to support a first-line lung cancer application in the U.S. that's nearly identical to the one it shelved in the EU. Merck hasn't shared the details, but Keynote-189 reached its main goals and the data will probably be used to bolster a resubmission for first-line lung cancer in the EU later this year.

While there's a good chance that Keytruda sales will continue growing, older products are at a standstill or sinking. Merck's Januvia franchise sales fell 3% last year to $5.9 billion and sales of cholesterol-reducing blockbuster Zetia fell 43% to $2.1 billion. With such stiff headwinds to overcome, the company expects total sales to rise by just 2% to 3% this year.

Over the past five years, Merck raised its payout at a sluggish 2.3% annual rate. Despite being cautious, four quarterly payments at $0.48 per share work out to around 63% of the company's earnings expectations for 2018.

Most big pharma's are comfortable with payout ratios in the 60% to 70% range, which suggests Merck's dividend isn't going to grow any faster than its bottom line. The average analyst following the stock expects earnings to rise at a 5.3% annual rate over the next five years. That's not terrible, but you can probably do better with Pfizer or AbbVie.

Analysts following Pfizer expect its bottom line to grow a bit faster than Merck's. Combined with a much lower payout ratio, though, shares of America's largest pharmaceutical company are positioned to deliver more dividend growth than Merck's. Over the past five years, Pfizer raised its payout at a 7.8% annual rate, increasing it to 3.7% at recent prices.

Even with a healthy rate of dividend increases in recent years, Pfizer's planned dividend payments for 2018 work out to just 46% of earnings expectations for the year. That low payout ratio gives the company a chance to boost payments at a rate faster than earnings growth, in the years ahead.

Sagging sales of aging blockbusters are a problem for Pfizer as well, but it has a few more pieces moving in the right direction than Merck. Last year, sales of next-gen blood thinner Eliquis rose 47% to $2.5 billion and breast cancer therapy Ibrance surged 46% to $3.1 billion. Although total revenue fell a percentage point in 2017, cost-cutting and share buybacks helped lift adjusted earnings 11% to $2.65 per share.

In 2017, Pfizer received a record 10 approvals from the FDA that will mostly expand addressable patient populations of already-marketed drugs, along with their sales potential. At last glance, Pfizer had around a half-dozen new drug candidates, plus biosimilar versions of six of today's blockbuster drugs, in late-stage development.

The most important patents protecting Humira's exclusivity expired last year, but Amgen (AMGN 0.94%) signed a deal last September that prevents it from launching its biosimilar version of the drug until 2023. The anti-inflammatory, which makes up about two-thirds of AbbVie's total revenue, racked up a stunning $18.4 billion last year and is expected to hit $20 billion by 2022.

At recent prices, AbbVie shares offer a 3.2% yield. Although that's a bit less than those of Pfizer and Merck, AbbVie grew adjusted earnings 16.2% to $5.60 last year and expects its bottom line to grow another 32% in 2018. The company's outstanding performance prompted the board to authorize a new $10 billion stock repurchase program and bump the dividend 35% higher this year.

Although Humira will eventually become more of an albatross than a hot-air balloon, AbbVie has several candidates in late-stage development that could help offset the losses. Risankizumab is an experimental psoriasis treatment that showed a huge benefit over Johnson & Johnson's Stelara, a drug that generated $4.0 billion in global sales last year.

Upadacitinib is another anti-inflammatory candidate with megablockbuster potential on its way to a Food and Drug Administration review soon. AbbVie intends to submit a rheumatoid arthritis application to regulators in the second half of the year, and pivotal trials with Crohn's disease and eczema patients are underway. AbbVie thinks a successful launch in multiple indications could drive upadacitinib sales to $6.5 billion by 2025.

Overly optimistic peak sales estimates abound in this industry, but AbbVie has a habit of delivering results. There are no guarantees that any of the company's late-stage candidates will succeed, but this pharma stock has what it takes to deliver heaps of dividend income for years to come.