About 20 years ago, the haters doubted the organic movement. That actually ended up being a great thing for companies in the area -- it left the entire sandbox free from megacompetition.

Against that backdrop, a man named Irwin Simon built a small empire in Hain Celestial (HAIN 0.17%). He acquired small, successful organic brands, and used the scale that Hain built up to help broaden distribution. That formula worked very well for a long time. 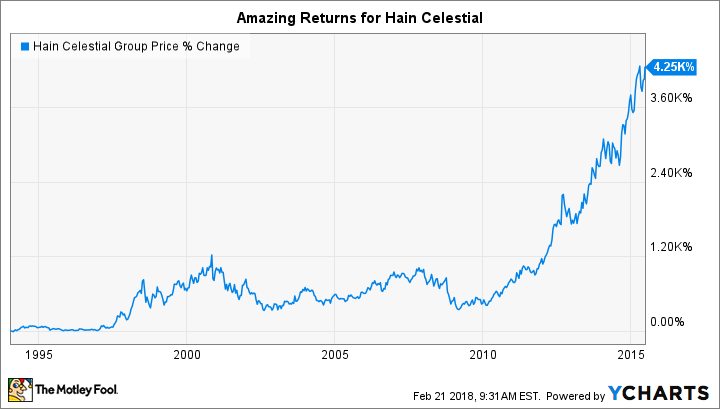 How has the stock fared since that June 2015 high-water mark? While the S&P 500 has returned 37% -- including dividends -- Hain's stock price has cratered, losing almost half its value.

With such a promising megatrend in the company's favor, will Hain Celestial's stock ever get its mojo back?

My opinion leaves no room for doubt -- it will not!

Aren't the company's troubles behind it now?

Shareholders of Hain (and I once was one of them) will be quick to point out that one of the major reasons for the stock's swoon was an accounting scandal that has since been cleared up. And those folks are right: The scandal is now behind the company.

The problem is that it leaves us to focus on the real problem: a fundamental deterioration of Hain's business model. 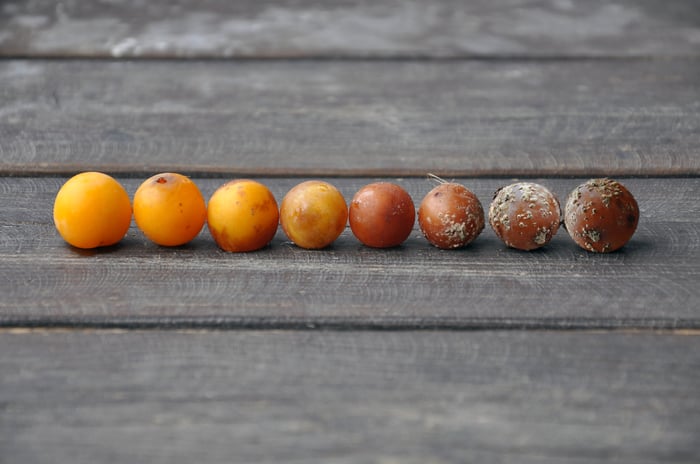 What started out as a stock ripe for the picking has turned into a company rotting from the core. Image source: Getty Images.

The business model is relatively simple: Acquire small and successful organic and natural-food brands, bring them to scale, milk all the cash out of it that you can, and use that cash to make further acquisitions.

When business is good -- those small brands keep growing -- this works. But as soon as things start to go south, it all falls apart relatively quickly. Here's what's happened to sales in the company's North American unit, the major source of revenue for Hain. 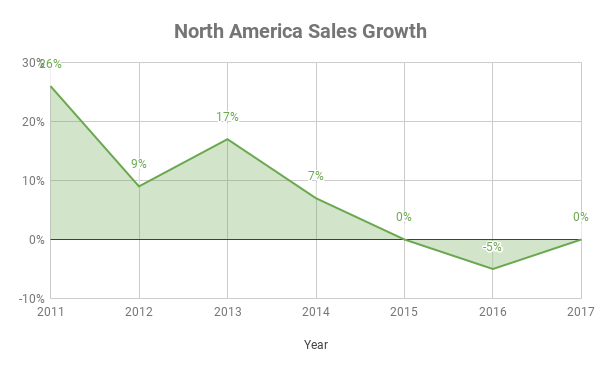 Bulls will argue that this chart isn't fair: Hain has reorganized divisions and discontinued certain brands, leading to automatic declines in sales in North America. While this is true, it is also disingenuous.

What really matters is "organic" growth -- and I don't use that term to refer to the type of food Hain offers up. Instead, I mean that -- because Hain's modus operandi has been to acquire smaller brands -- what we really want to know is if those brands continue to grow sales after being acquired. But Hain does not regularly include that figure in its SEC filings, and management has been infamously unwilling to regularly give such figures on conference calls.

The trends are not in the company's favor

But perhaps the biggest thorn in Hain's side is that customers -- especially millennials -- aren't brand-loyal the way their parents were.

As former hedge fund partner Michael Alkin pointed out in a January 2018 conference, buying up small brands no longer works to keep millennials on board; they want brands that are small, local, and organic. If those brands get bought up by bigger players, they will simply rotate out of those brands and find others.

In other words, Hain's business model is in serious trouble.

How much would you be willing to pay for such an imperiled future? Right now, shares of Hain trade for 23 times earnings and 59 times free cash flow. Some on Wall Street think that the company is preparing itself as an acquisition target. While that may be true -- and if it is, shareholders will likely get a premium to today's prices -- that's not solid footing for an investment thesis.

In fact, if that came to fruition, I would immediately classify a company that acquired it at a premium to today's prices as a stock to avoid at all costs. That's because, in the end, all an organic food company has as a moat is its brand. And brands -- as far as the future holds for such companies -- are less and less important by the day. As long as that's the case, Hain investors shouldn't expect the company to get any of its mojo back.