The kid's clothing retailer ended 2017 on a high note and sees more of the same strength in the coming year.

Still, shares of the children's-clothing retailer fell as much as 11% in Tuesday's early trading after the company followed with what appeared to be conservative guidance. Let's take a closer look at what Carter's accomplished over the past few months, as well as what investors can expect from the company this year. 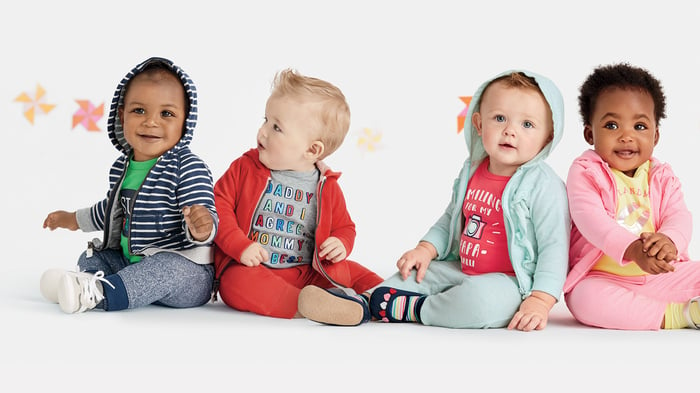 We saw strong demand in all channels of distribution in the fourth quarter, and are reporting another year of record sales and earnings. In 2017, we achieved our 29th consecutive year of sales growth, strengthened our business with the acquisitions of Skip Hop and our largest international licensee based in Mexico, and returned $260 million to shareholders through dividends and share repurchases. The Tax Cuts and Jobs Act of 2017 is expected to have a significant and positive impact on our Company's future earnings, cash flow, and ability to invest in its growth strategies. In 2018, we plan to reinvest approximately half of the $40 million benefit from the lower corporate tax rate in brand marketing and improved eCommerce capabilities.

As I mentioned above, the other half of Carter's unexpected tax benefit is being used to reward Carter's full- and part-time employees in the form of one-time cash bonuses, as well as a 100% match to their company-sponsored retirement plans -- a very "Foolish" investment by the company in its culture and rapport with employees.

Casey further insists that Carter's is poised for "another good year of sales, earnings and cash flow in 2018."

To start, Carter's expects first-quarter 2018 net sales will increase roughly 2% year over year, which should translate to adjusted earnings of $0.97 per diluted share. By comparison -- and though we don't normally pay close attention to Wall Street's demands -- consensus estimates predicted higher first-quarter revenue growth of 6.9% and adjusted earnings of $1.19 per share.

For the full year of 2018, Carter's anticipates net sales will grow roughly 5% year over year, which should result in a 15% increase in adjusted earnings, to roughly $6.62 per share. By contrast, Wall Street was looking for slightly more aggressive 5.9% revenue growth and full-year adjusted earnings of $6.64 per share.

Carter's elaborated that its outlook reflects a "significant" increase in investments in both brand marketing and improved e-commerce capabilities -- though we know a hefty chunk of those investments will come from its tax windfall. But even then, Carter's minuscule guidance shortfall relative to expectations would seem hardly enough to merit the market's severe negative reaction today.

Of course, it's worth noting that Carter's stock had climbed nearly 40% in the year leading up to this report, likely tempting some skittish investors to take profits off the display rack. But all things considered, I think patient, long-term shareholders should be more than happy with what Carter's had to say today.