Please ensure Javascript is enabled for purposes of website accessibility
Log In Help Join The Motley Fool
Free Article Join Over 1 Million Premium Members And Get More In-Depth Stock Guidance and Research
By Keith Speights - Feb 28, 2018 at 5:08AM

Alphabet could have what it takes to be a winner in a rapidly growing niche healthcare market.

Google parent Alphabet (GOOG 5.20%) (GOOGL 5.11%) knows that there's a lot of money to be made in healthcare. That's why the company formed two subsidiaries to focus on healthcare -- Calico and Verily Life Sciences. Calico's focus is on increasing the human life span, while Verily's efforts so far have included developing technology to treat disease and manage health.

Now, though, Alphabet's Verily unit appears to be going after a healthcare niche that one expert predicts could grow into a $1 trillion market, according to a recent CNBC report. What is this market -- and can Alphabet succeed in it? 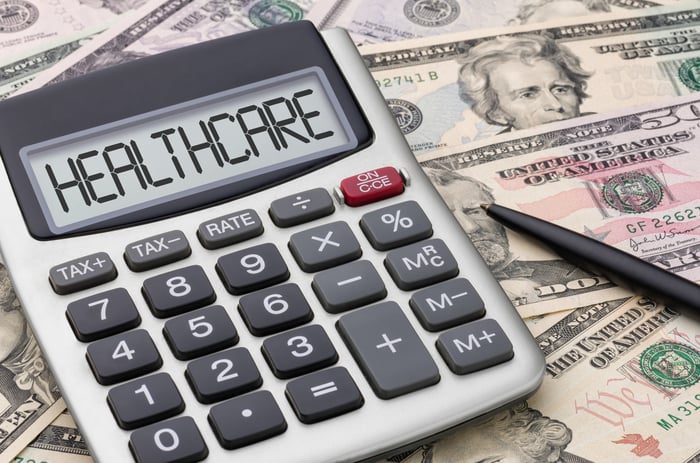 A new and growing market

The idea of population health management was first mentioned in 2003 by healthcare researchers David Kindig and Greg Stoddart. This concept of using data to better manage healthcare for populations, or groups of individuals, began to pick up momentum over the next few years.

Use of population health management should lead to lower costs for payers, including governments, insurers, and employers. For example, data could be used to help patients better manage diabetes proactively to prevent costs arising from potential complications.

Currently, the population health management market represents between $20 billion and $25 billion in annual spending. The market is expected to grow significantly, but estimates as to just how much are all over the map.

Ari Gottlieb with global professional services firm PwC told CNBC that the population health management market could grow to as much as $1 trillion if more insurers adopt the approach to controlling healthcare costs. Grand View Research predicts that the market could reach $89.5 billion by 2025. That reflects solid growth from current levels, but is a far cry from the PwC estimate.

What Alphabet brings to the market

The CNBC report cited sources stating that Verily is in discussions with health insurers about partnering to bid on contracts for population health management for hundreds of thousands of patients. The company is ramping up hiring of staff with expertise in health insurance, especially in managing total healthcare costs.

But what does Verily, and, at a broader level, Alphabet, bring to the population health management market? It's all about the data.

Verily and 3M (MMM 3.21%) announced a partnership in October 2016 to develop population health management solutions. 3M's software is used extensively by hospitals and government agencies for health data coding and risk stratification. This collaboration potentially gives Verily access to a large amount of data to use in helping manage risk for large groups of patients.

Verily is also working with Duke University and Stanford Medicine on a project to gather and analyze health data from around 10,000 participants. The purposes of this project are to establish a baseline of good health, better understand the transition from health to disease, and identify additional risk factors for disease. This kind of data would be ideal for use in population health management.

Alphabet's Google business unit also has an effort under way that could give Verily a competitive edge in the population health management market. Google teamed with the University of California, Stanford University, and the University of Chicago to develop an AI system that predicts the outcomes of hospital visits. The ability to prevent hospital readmissions and reduce lengths of stays could help dramatically lower total healthcare costs. This research and other initiatives make Alphabet a leader in applying AI to healthcare -- and the technology could be important for Verily in its population health management push.

Can Alphabet take a big chunk of the population health management market? It's quite possible. But it's also still very early.

The company hasn't even officially announced its plans to jointly bid on population health contracts with insurers. It's still in the preliminary stages of building a team. And the market already has quite a few players with deep pockets.

I wouldn't underestimate Alphabet, though. The company certainly has the technological prowess at collecting and analyzing data. Verily also has solid connections with key companies and nonprofit organizations in the healthcare industry.

For now, though, there are much bigger reasons to buy Alphabet stock than the population health management initiative. The company's core Google business remains very strong, with impressive year-over-year revenue growth of nearly 24% in the fourth quarter of 2017. Alphabet's "other bets" segment, which includes Verily, generated only around 1% of total revenue.

Still, Alphabet gives investors both stable growth and profitability from its core businesses plus a lottery ticket of sorts for potentially lucrative new markets like population health management. There's a lot of money to be made in these markets -- and Alphabet seems determined to rake in some of it.