The e-commerce specialist trades at a sky-high valuation. Could it crash if the market pulls back?

Shopify (SHOP -2.22%) has been a market darling essentially since its 2015 IPO. In less than three years, the Canadian tech company has gained more than 400%, and it's riding two of the biggest trends in the market -- e-commerce and cloud computing.

Shopify makes cloud-based software for businesses to manage their online sales accounts across platforms such as social media and marketplaces, and it caters to small and medium-sized business and some larger companies, including Nestle and Red Bull. 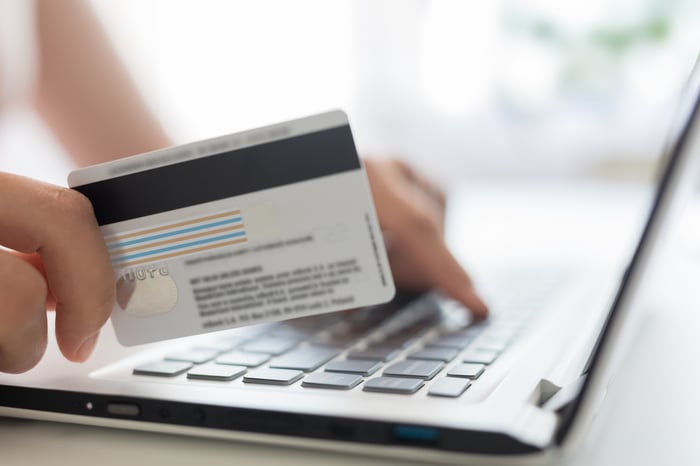 The company has been growing like a weed since first hitting the public market. Revenue increased 73% in 2017 to $673.3 million, with business quickly signing on to the platform. Much of Shopify's income comes from subscriptions, so adding new vendors is crucial to its growth. However, despite that surging revenue, the company is still operating at a loss on a GAAP basis, posting a loss of $0.42 per share last year.

Another point of concern for investors is the company's valuation. Not only does Shopify lack earnings to underpin its valuation, but the stock also currently trades at an eye-popping price-to-sales valuation of 20, a multiple often reserved for biotech companies and similar start-ups. Shopify's rich valuation has already made it a target of short sellers; Citron Research's Andrew Left prompted a sell-off in October when he called it a "get-rich-quick scheme," saying that many of its users were not sustainable businesses and would eventually fold, taking down Shopify with it.

Given the company's valuation, lack of profits, and attacks from short sellers, investors may be wondering how Shopify would respond to a market downturn, since the company seems particularly risky. Let's look at the evidence.

Shopify's ability to withstand a market downturn was tested earlier this month, during the market's brief correction. Though high-priced stocks are generally more volatile and therefore fall more sharply during sell-offs, Shopify stock didn't react like that earlier this month.

During the Feb. 1-8 market slide, the S&P 500 lost 8.5%, while Shopify gave up only 6.2%, indicating that the stock may be safer than suspected. Following the Brexit vote, however, the S&P 500 gave up as much as 5.3%, while Shopify lost 12.9%. Still, Shopify was a smaller company then, and confidence in the stock may have increased as the e-commerce specialist has delivered impressive growth.

There hasn't been a recession since the financial crisis of nearly a decade ago, when Shopify was a much smaller, privately held company, but like the broader retail sector, e-commerce is sensitive to macroeconomic growth. In 2008, U.S. e-commerce sales growth slowed abruptly alongside the economy. After increasing 18.8% in the fourth quarter of 2007, online sales fell 7.7% in the quarter the year later and would be negative for three quarters in a row. It wasn't until the fourth quarter of 2009 that e-commerce growth returned to double digits.  Amazon.com (AMZN -0.12%), which may offer the best proxy for Shopify, lost nearly two-thirds of its value during the recession, compared with a loss of about 50% for the S&P 500. Amazon also fell much faster than the market.

Unlike most e-commerce businesses, Shopify is not a retailer but a platform company, and it makes nearly half of its revenue and more than two-thirds of gross profit from subscriptions, which should be buffered from any potential downturn. Of course, if a deep recession hits, some of those subscribers could go out of business, and subscription growth would be likely to slow, but the consistency of the subscription model should give the company some protection in a slowing economy. Most of Shopify's merchants pay less than $50 a month,  which is relatively small for the value the software gives to their business. Because of the switching costs in moving to a new provider, Shopify's merchants are likely to stick with it as long as their business is successful.

Its merchants solutions segment, on the other hand, is dependent on add-ons such as payment processing fees, so a slowdown in sales growth among its merchants would hurt Shopify directly.

In the event of a market downturn, Shopify shares could fall sharply especially if sales growth slows, since the company has no profits to justify its sky-high valuation. However, over the long term, there's no question that e-commerce has a long growth path ahead of it as it continues to take share from traditional retail. As long as Shopify can maintain its leadership in e-commerce software, the stock should be able to bounce back from a downturn. Much like e-commerce growth came roaring back after the recession, Shopify could do the same. If the stock crashed in a downturn, that could set up an excellent buying opportunity for long-term investors.

John Mackey, CEO of Whole Foods Market, an Amazon subsidiary, is a member of The Motley Fool's board of directors. Jeremy Bowman has no position in any of the stocks mentioned. The Motley Fool owns shares of and recommends Amazon, Nestle, and Shopify. The Motley Fool has a disclosure policy.