The package delivery giant's strategy will take time to come to fruition. Will investors lose patience?

Digging into the recent earnings from United Parcel Service (UPS -0.42%), it's clear that management is set on a strategic path that's open to question. E-commerce growth is creating opportunities and challenges for UPS and FedEx Corporation (FDX 0.53%), and it's unclear if management is on the right track to address them. 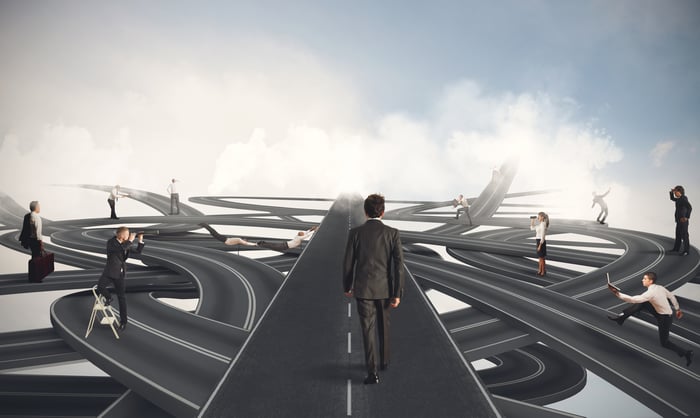 Is UPS on the right track? Image source: Getty Images.

In a nutshell, e-commerce growth is creating an opportunity for volume growth -- both UPS and FedEx are seeing ongoing growth in volume. However, it's also creating challenges to both companies' margins. In addition, surging online sales during peak delivery periods, such as Cyber Weekend (the period immediately after Thanksgiving), puts a stress on UPS and FedEx networks and can affect profitability as they need to purchase transportation at short notice in order to provide an adequate service -- UPS has been notably impacted in this regard.

The following chart shows how UPS's U.S. domestic package segment margin has fallen in recent years -- it's a good idea to compare quarter to quarter by year because earnings can be seasonal. 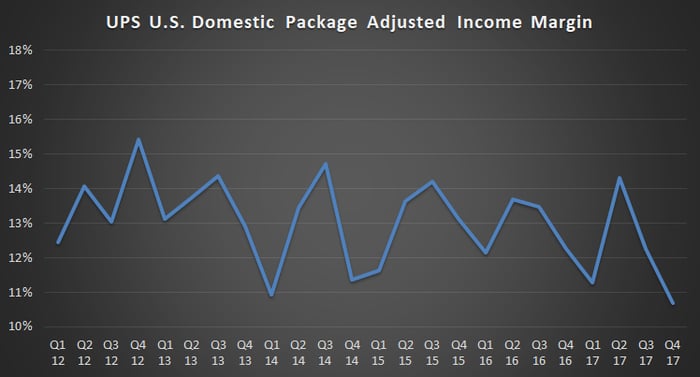 Moreover, you can see the impact that increased purchased transportation costs in the fourth quarter -- when peak delivery periods (Cyber Weekend and Christmas) take place -- are having on UPS's U.S. domestic package segment profitability in the quarter. 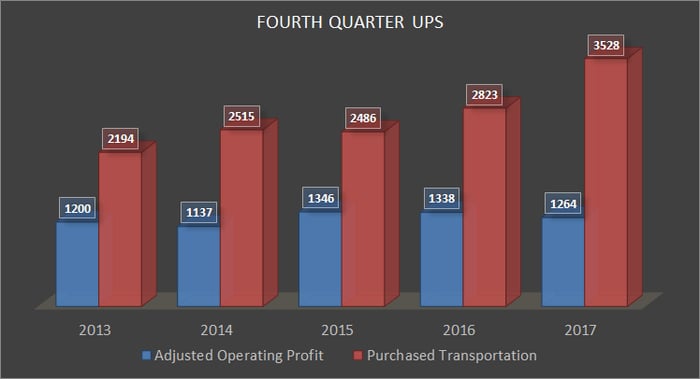 What UPS and FedEx are doing about it

In response to these pressures on earnings and their networks, both companies have been ramping capital expenditures in recent years -- something that has a negative impact on free cash flow in the near term. 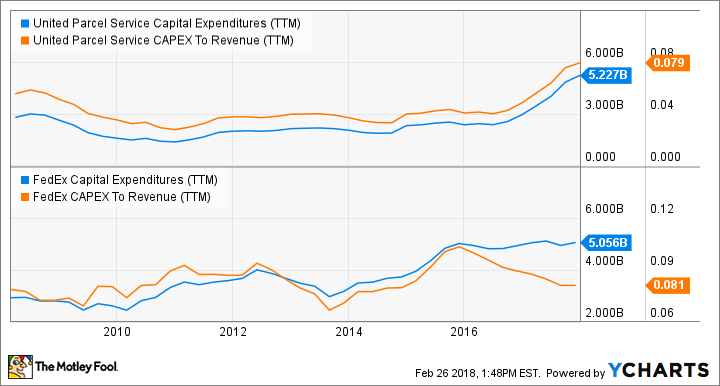 Moreover, both companies have been making pricing initiatives in order to ensure a profitable mix of deliveries and influence customer behavior in order to smooth out peak period demand spikes. Measures such as peak surcharges, dimensional-weight pricing (packages are priced based on dimensions as well as weight), and changes to additional handling surcharges have all been implemented by both companies.

UPS has been more heavily impacted than FedEx

It's fair to say that UPS has found it much harder going than FedEx has. UPS's recent fourth-quarter results saw the company reporting a surge of volume during the Cyber Weekend that "pushed our U.S. network above its maximum capacity," according to President of U.S. Operations Myron Gray on the earnings call. As a result, UPS's cost increased by an additional $125 million, and U.S. domestic package adjusted income fell 5.5% to $1.26 billion.

Analysts were quick to ask about the details of what went wrong during the Cyber Weekend. In response, UPS CEO David Abney acknowledged that UPS's peak surcharges "didn't have quite the success that we thought we would into shaping." In addition, Abney promised UPS would look at its so-called control tower (how the company manages volume flows) and "what we need to do around Cyber Week."

While these two issues -- peak surcharges and the control tower -- are operational matters, it was left to Bernstein analyst David Vernon and Wolfe Research's Scott Group to ask the key question relating to the strategic question. Both analysts would have surely noted that FedEx and UPS have both seen good increases in volume in 2017, even as price per package is rising. 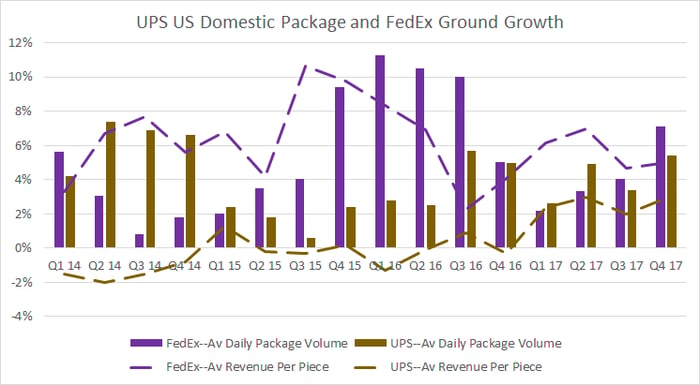 The corollary, as discussed by Scott Group, is that UPS might be able to increase pricing and, in doing so, reduce volume growth (while still increasing profits significantly), and then capital expenditure increases could moderate as volume growth became less of a priority.

However, the responses from president of UPS International Jim Barber, CFO Richard Peretz, and Abney suggested, management believes in capturing the growth opportunity from e-commerce deliveries by increasing capital spending. In doing so, Peretz believes UPS will best return value for shareholders, while Abney argued that increasing spending on the company's network would ultimately reduce costs.

Ultimately, UPS's strategy of modernizing and expanding its network rather than improving the volume mix via aggressive price increases may well prove to be the right one. However, unless margin can start to demonstrably improve, it could take a few years before the strategy will be proven correct.

While UPS doesn't run its business in order to manage its margin on a quarter-to-quarter basis, I still think that's the key metric to focus on here. Until margin in the U.S. domestic package segment improves, questions will remain as to whether UPS is on the right track.