Because Harley-Davidson (NYSE:HOG) is seen as the quintessential American company, it becomes the target whenever trade talks turn protectionist. With potential trade wars simmering in India and Europe, and considering the declining state of the motorcycle giant, it's fair to ask whether Harley-Davidson could survive tit-for-tat tariffs that end up putting its motorcycles in the crosshairs.

Trade offs that benefit no one

President Trump campaigned on more protectionist trade policies, viewing many countries as getting a free ride at the expense of U.S. manufacturers. India is a case in point as it imposes a tariff on motorcycle imports of as much as 100% while there are no tariffs on Indian motorcycles imported into the U.S. (it can be as much as 10% on some other countries, however, depending upon the size of the motorcycle). 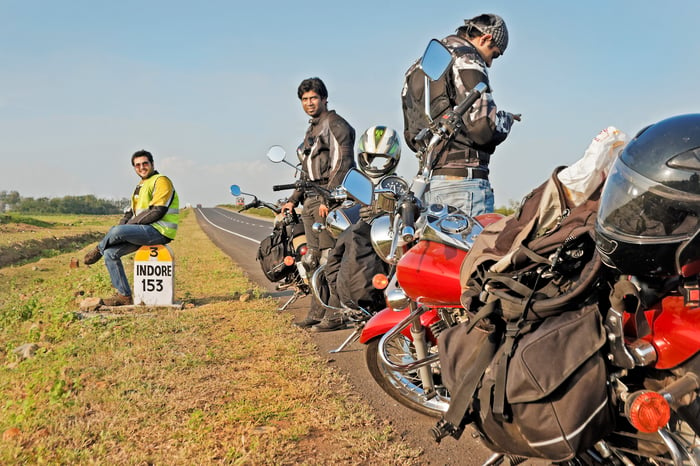 Although India has said it was ready to halve the tariff to 50%, Trump recently said a "reciprocal tax" might be the fairest way to address it.

Harley-Davidson has largely been able to get around the tariffs by opening a manufacturing plant in India, just as it announced last year it would do in Thailand to get around that country's 60% import duties. By locating a facility there, it would also open up more of the Asian market to the bike maker, as it would be cheaper than building bikes here and shipping them overseas.

But trade wars rarely, if ever, benefit anyone, and even more rare is the case where the same industry is affected by the retaliatory measures. That's what's happening in Europe as the Commerce Dept. urged Trump to impose tariffs on aluminum and steel, with the EU responding by saying it would consider imposing tariffs on U.S.-made agricultural products, like potatoes and tomatoes, as well as whiskey and Harley-Davidson motorcycles.

Where Harley might benefit in some small way from a clamp down on India, as it might raise hurdles slightly for newly emerged rival Royal Enfield, getting slapped with high import duties in Europe could wreck the bike maker.

Europe is a key market for Harley-Davidson, representing just under a 10% share of all new motorcycle registrations there for motorcycles with engine displacements of 601 cubic centimeters and larger. Europe also accounted for 16% of Harley's worldwide motorcycle sales last year, or some 39,773 bikes, and it totaled 42% of the bike maker's international sales, making it the second biggest market behind only the U.S. 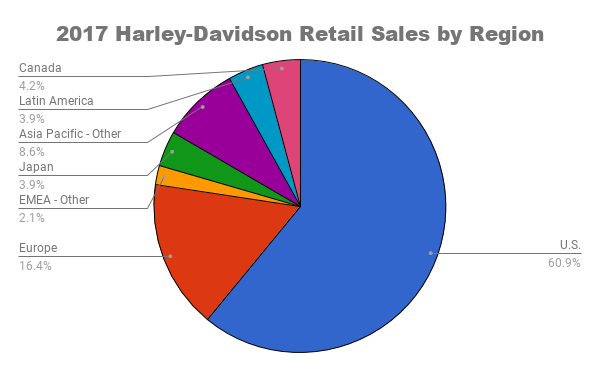 Growing globally is one component of Harley-Davidson's turnaround strategy. Motorcycle sales have fallen for four straight years, and though most of that is due to dramatically lower U.S. sales, the bike maker hopes to make international markets a larger component of the total.

Harley has been encouraged by the reception its new Softail models have received in Europe. Sales there (and in other international markets too), skew higher toward Softails than they do in the U.S. With many of its latest model introductions being Softails, having prices hiked now due to new, higher tariffs would hurt the company considerably.

Just as in the U.S., there's significant discounting under way by European manufacturers, a pricing strategy that Harley-Davidson refuses to engage in. Tariffs on its motorcycles would dramatically widen the disparity in prices, meaning Harley can't afford to see European sales fall off a cliff.

What goes around comes around

There's a certain amount of irony in the motorcycle king getting hurt by trade restrictions because it was Harley-Davidson that lobbied the Reagan administration 35 years ago for draconian tariffs against its global rivals.

Then, like now, the motorcycle industry was in a steep slump and Harley made the case that by limiting cheaper imports, it could gain breathing room to become competitive once again. While the story goes that's what happened and Harley was able to ask for the restrictions to be lifted several years early, the fact is Harley was already in turnaround mode at the time, and the tariffs that were imposed actually cost more jobs than they saved.

No one will come out a winner in a trade war, least of all Harley-Davidson. It might survive, but it would also take on heavy damage at a time it can ill afford to do so.