In late 2017, Lamborghini debuted what it called the world's first "super sport utility vehicle," the Urus. It is an undeniably beautiful machine, and it has the performance to make it worthy of the Lamborghini badge. It's also proof that SUVs aren't just a fad, but a trend that could stick for a long time.

Cashing in on the SUV craze

This isn't Lamborghini's first foray into off-road vehicles. Back in the late 1980s and early 1990s, the luxury automaker built some 300 of the LM002, a Jeeplike vehicle that never really had any success. Now Lamborghini is back in the game with the 2019 Urus, priced at $200,000. That gets you a 650-horsepower V8 that will go from zero to 60 miles per hour in 3.6 seconds, along with all the interior luxuries one would expect from a supercar.

Why would Volkswagen (OTC:VWAGY) -- the owner of Audi, which in turn owns Lamborghini -- OK such a project? It's simple: A Lamborghini SUV would be very profitable. Urus is borrowing its platform from the Audi Q7 SUV, which means the cost to build it could be very low. There is also precedent for this move, as Lamborghini's sister companies Porsche and Bentley have had success selling luxury utility vehicles. The Urus won't roll off showroom floors until the third quarter of year, but estimates indicate that it will double Lamborghini's annual unit sales to 7,000 by 2019. 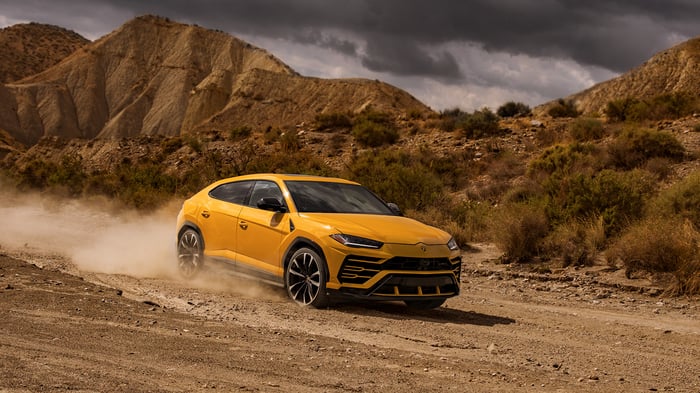 The Lamborghini Urus, pictured doing something few of its owners are likely to do with it. Image source: Lamborghini.

If the endeavors of Volkswagen and friends aren't enough proof that SUVs are taking over the auto industry, here are some telling numbers from 2017. Over 17 million vehicles sold in the U.S. last year, and 42% of them were SUVs and crossovers. That's up from 39.5% in 2016.

A total of 93.5 million vehicles sold worldwide in 2017, and while most of them were cars, SUV and crossover sales increased 12% from the prior year and have nearly doubled in the last five years. The Toyota (NYSE:TM) RAV4, a compact crossover, nearly managed to break into the top three vehicles by worldwide sales in 2017.

The reasons for this trend include the greater comfort and passenger and cargo capacity offered by SUVs. Overall, SUVs and crossovers are viewed as trendy and increasingly luxurious, adding to the appeal. That's good news for automakers, as bigger vehicles tend to have higher profit margins. Thus manufacturers have been more than happy to promote the trend.

The rise in sales of bigger vehicles could have real staying power even if fuel prices edge back up after collapsing the last few years. Electric vehicles and plug-in hybrids are slowly beginning to gain traction, and several new electrified options in the SUV space are coming later this year. Even Lamborghini is looking to build a hybrid, and the Urus should be the first model with that option starting in 2020.

In short, it seems that bigger vehicles could become the norm all over the world in the near future.