Barrick Gold (NYSE:GOLD) dropped 20% last month, according to data from S&P Global Market Intelligence. The stock's slide stands in stark contrast to the price of gold's 2.9% rise through the month -- a noteworthy observation, since the price movements of gold stocks often follow movements in the price of gold.

Although the company reported fiscal 2017 earnings per share of $1.23 -- a 120% increase over the $0.56 it reported in fiscal 2016 -- it couldn't outshine the pockmarks in the earnings report and fiscal 2018 guidance. Let's dig in deeper to find the sources of investors' disappointment. 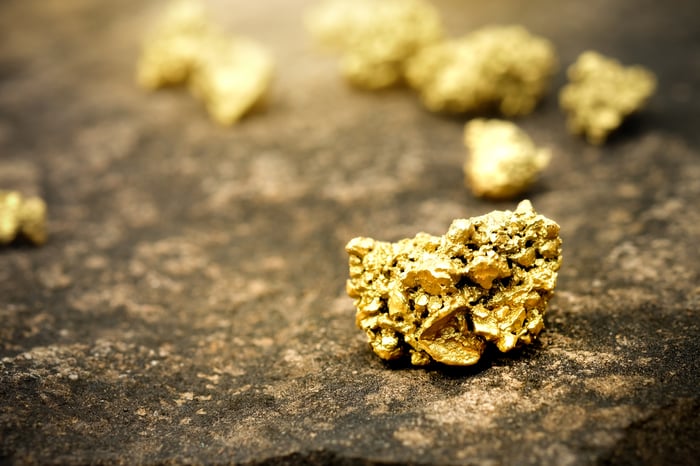 In addition to digging the yellow stuff out of the ground, the company's challenges in controlling costs disappointed investors. For fiscal 2017, Barrick reported that all-in sustaining costs (AISC) rose approximately 3% year over year to $750 per gold ounce. Although this is well within the guidance of $720 to $770 per gold ounce issued a year ago, the future seems a lot less lustrous. Management estimates that average annual AISC for fiscal 2019 through fiscal 2022 will be $750 to $875 per ounce. Besides lower gold production at the previously mentioned mines, management credits the increased processing of higher-cost inventory and higher costs at Acacia as reasons for the expected rise in AISC.

The stock's drop in February, presumably, would have been more precipitous had it not been for some bright spots in the earnings report. The company, for example, generated $2.07 billion in operating cash flow and lowered its total debt to $6.4 billion -- a 19% reduction from the $7.91 billion on its balance sheet at the end of fiscal 2016.

Although the earnings report was mixed, Barrick still remains one of the more compelling opportunities for investors interested in gold-mining stocks. Gold production and AISC are merely two aspects of the company's business. Management's commitment to shoring up its balance sheet, for example, represents a green flag. The Street agrees. Illustrating its confidence in the company's future, Moody's recently upgraded Barrick's senior unsecured ratings from Baa3 to Baa2 with a stable outlook.