What's the best drink to add a caffeine jolt of a dividend to your portfolio:  soda or coffee?

Two big purveyors of those beverages -- Coca-Cola (NYSE:KO) and Starbucks (NASDAQ:SBUX) -- are both highly profitable companies that pay out dividends on a regular basis. But of the pair, I feel Coke is the superior investment in terms of its payout. Here are the two major reasons why. 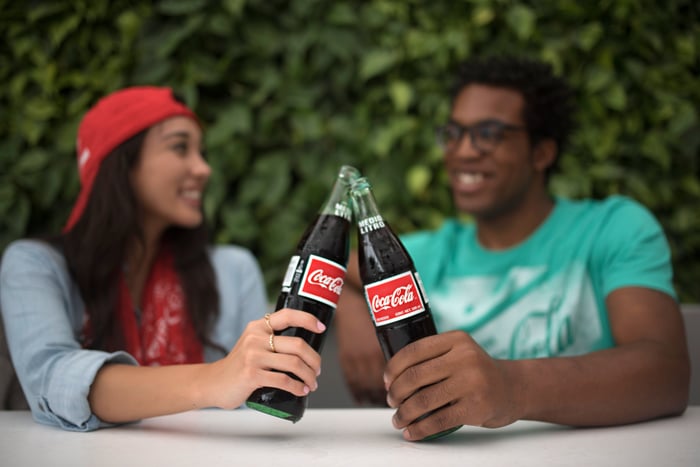 Coke has a pair of major, nearly unassailable strengths in terms of its dividend. First, it has managed year after year, through wars, recessions, and depressions, to squeeze out distributions for its shareholders. Second, it has the financial muscle to support this, and should eke out enough growth to keep funding an apparently endless streak of raises.

Few companies -- and no other food and beverage makers -- have paid a dividend as long and consistently as Coke. It began rewarding its shareholders in this manner way back in 1893. The following century, it began to raise its payout on a regular basis and has never stopped; it today holds one of the longest annual raise streaks (56 years and counting) on the market.

And that dividend is substantial -- it currently yields 3.6%, well above the typical rate for a big industrial.

Some might be alarmed that the company lately has been spending more than its free cash flow (FCF) on the combination of dividends and share buybacks. They might also worry that its core business of carbonated drinks is in trouble due to shifts in consumer preferences toward healthier foods and beverages. These concerns are valid, yet Coke has a number of levers it can pull to improve its performance.

In 2017, it boosted organic growth by 3%, through such moves as introducing new products in smaller cans -- essentially getting more money for less liquid. Meanwhile, a recent initiative to refranchise its bottling operations, and its increased focus on those higher-margin products, should save costs and further increase profitability.

Admittedly Starbucks, which hasn't quite blanketed the entire world as thoroughly as Coke, has better potential for growth. The U.S. market is fairly saturated for the coffee chain, but there is still plenty of untapped space in certain high-potential markets. The biggest example is China, a vast country that can't seem to get enough lattes and Frapuccinos.

But expansion requires funds, which diminished the dosh available to be used for dividends. Starbucks has a much lower cash dividend payout ratio (just under 55%, at last measure, compared to nearly 120% for its fizzy-drink rival). There's a significant "but" here, though, and that's yield --- Starbucks' 2.1% is significantly lighter than Coke's.

Plus, the coffee slinger doesn't have anywhere near the track record of Coke. Yes, it's hiked its payout every year, at times generously, but only initiated its distribution in 2010. It's too soon to determine whether Starbucks can and will turn into that kind of rock-steady, reliable payer and raiser.

How to slake an investor's thirst

Yield and stability are two of the top criteria that many income investors (myself included) look at when picking dividend stocks. Coke has both in spades; Starbucks, for all of its success in the past two decades or so, isn't quite as alluring yet ... although if it eventually approaches the cash-generating, every-market-in-the-world ubiquity of Coke, it certainly stands a good chance becoming so.