The 6.1-inch model, according to respected analyst Ming-Chi Kuo with KGI Securities, is expected to sell the best of the three new iPhones, making up about 50% of the shipments of the iPhone models that launch this year.

At first blush, it might seem a little strange that the lowest-cost model would have a screen size that's in between those of the higher-end models. However, I think there is a good strategic reason. 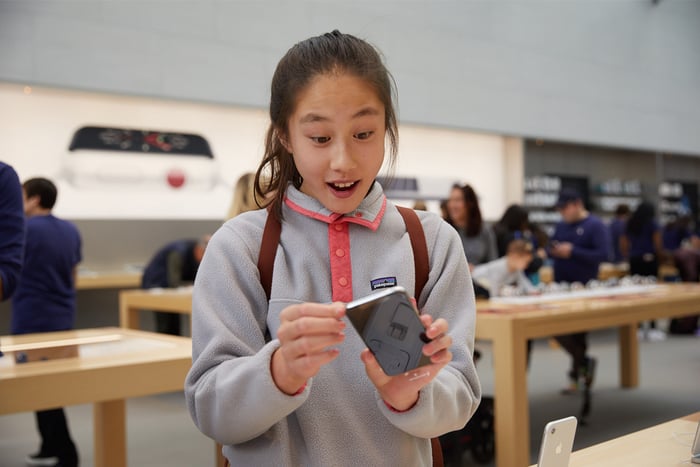 I think that if a 6.1-inch LCD iPhone proves to be as popular with consumers as the current rumors suggest, Apple will gain additional confidence that iPhone users generally prefer larger displays -- something that has become increasingly clear over the years.

In that case, I would expect Apple to increase the screen size of the successor to this year's rumored 5.85-inch OLED iPhone to something more along the lines of 6.1 inches.

However, if the 6.1-inch LCD iPhone doesn't sell as well as Apple hopes, or if its market research data shows that some potential iPhone buyers paid a premium for the 5.85-inch OLED model because they wanted a more compact device, then Apple may continue to release new devices with the same basic screen sizes as found on what we expect to see later this year.

My guess, though, is that the results of this test will ultimately push Apple to increase the screen size of the smaller OLED-based model. The 2019 iPhone lineup could very well include a 6.1-inch LCD model, a 6.1-inch OLED model, and a 6.46-inch OLED model, with the current iPhone X size going away.

By making the smaller of the two OLED iPhone models bigger in future generations, Apple could deliver an improved user experience.

For one thing, a slightly bigger device with a slightly bigger screen could accommodate a larger battery. Even accounting for the increased power draw of the larger screen, overall battery life could go up, or Apple could have additional power to allocate to other features and capabilities.

Indeed, the cheaper 6.1-inch LCD iPhone is expected to incorporate a higher-capacity battery than the upcoming 5.85-inch OLED iPhone.

Moreover, if Apple intends to evolve its iOS operating system to handle multitasking better and to be a more robust platform for augmented reality, increasing the average screen sizes of its iPhones can only help the situation.

The main downside that I see to a 6.1-inch OLED iPhone is that a larger OLED display would be more expensive to manufacture than a 5.85-inch OLED display. Offsetting that, however, could be the addition of more OLED display suppliers to the Apple supply chain, which could help drive down Apple's OLED display costs.