The year 2018 started with a bang, but exuberance abruptly ended with the onset of February. After a two-year run with barely a hiccup, the stock market correction was a reminder for many that stocks can move in more directions than one.

If that reminder has you rethinking where your money is invested, alcohol stocks might be a place to begin. Here are five that offer dividends that can help make up for the pain.

Dividends will make it all better

All of the above stocks pay attractive dividends, with the exception of Constellation, with its less than 1% yield. However, what it lacks in dividend payouts it has made up for in share price appreciation, doubling several times over the last five years.

Overall, share price returns are relatively unimpressive. Alcohol is an old business, after all. However, alcohol holds up well regardless of economic conditions. Consumers tend to consume more but cheaper alcohol when the economy hits a rough patch. Nevertheless, add those dividend payments in, and each stock has provided steady returns in the last decade. 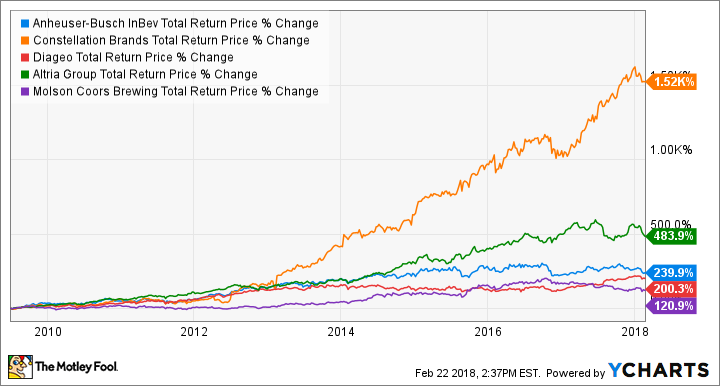 News at the bar

There have been quite a few shake-ups in alcohol in recent years. Big manufacturers have been consolidating, especially as small craft-style breweries, wineries, and distilleries have started popping up all over the world. This has helped the biggest players maintain their bottom-line profit and keep those dividends flowing.

In the case of Constellation Brands, the company initiated a dividend payment in 2015 after successfully integrating the U.S. portion of Grupo Modelo (Corona, Modelo, and Pacifico) that it acquired from A-B InBev in 2013, and has increased it nearly 50% since then. 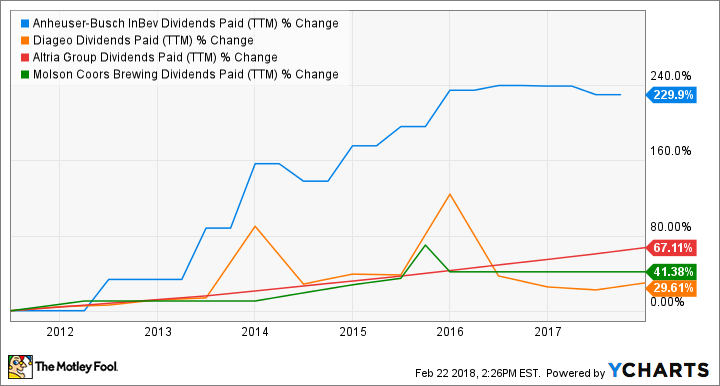 A-B InBev has been at the center of several big moves in the industry. A decade ago, it was the combination of Budweiser with the Belgian brewer InBev, and in 2016, the conglomerate added most of the assets of brewer SABMiller. The Miller brand in the U.S. was sold to Molson Coors to gain regulatory approval. A-B InBev is now easily the world's largest beer maker and is trying to streamline operations to boost profitability. In addition, the company has also taken advantage of the craft beer boom in the U.S. by acquiring 10 regional brewers over the last few years. 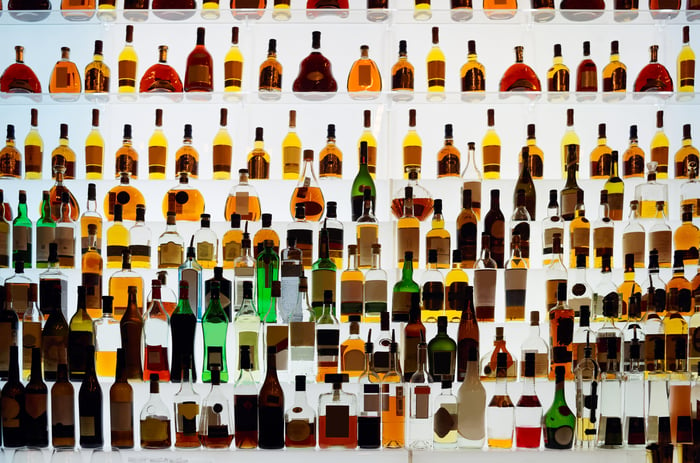 Diageo was formed in 1997 with the merger of Guinness and Grand Metropolitan. Brands include Guinness beer and a big piece of the distilled spirits market. While Diageo doesn't boast the same growth rates as rival Constellation -- net sales were up only 1.7% as of last report -- the well-established portfolio is rewarding patient shareholders nonetheless. Adjusted earnings per share increased 9.4% due to higher operating profits and lower interest expense, and the dividend was raised 5%.

Last on the list is Altria, primarily a tobacco company best known for the Marlboro brand. It made the cut, though, as it owns a large stake in A-B InBev and owns wine labels Chateau Ste. Michelle, Colombia Crest, and 14 Hands. Wine was 3% of revenue in 2017, and the interest in A-B InBev contributed only a few cents to earnings per share. However, both add to the stability of the overall business and help make an attractive dividend paying at over 4% a year.

If fighting market swings to the downside is your goal, collecting income from dividend paying companies is a good strategy. These best-in-class companies could help do just that with their attractive dividend yields and well-established portfolios of alcohol brands.