Please ensure Javascript is enabled for purposes of website accessibility
Log In Help Join The Motley Fool
Free Article Join Over 1 Million Premium Members And Get More In-Depth Stock Guidance and Research
By Nicholas Rossolillo - Nov 18, 2017 at 5:31AM

What is one to do in the small town of Fairfield, Calif., the halfway point between Sacramento and San Francisco? Schedule a tour of Anheuser-Busch InBev's (BUD 0.55%) Budweiser factory, of course. My short tour during a recent business trip left me with a new appreciation for the world's largest brewer, along with some insight on the company's strategy to remain relevant in the fast-changing alcohol industry. 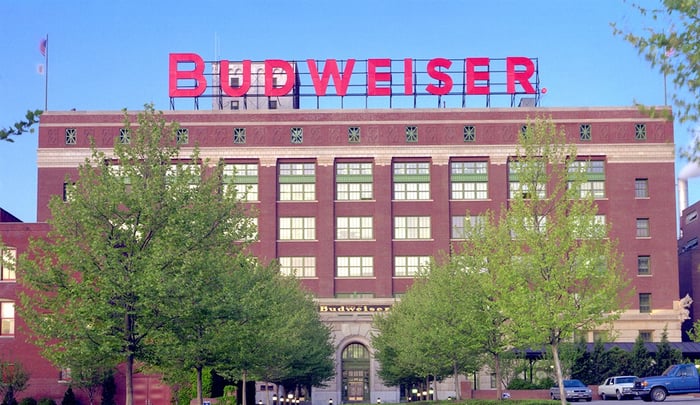 1. A wide and deep beer moat

The tour began with a review and tasting of some of the many products A-B InBev has to capitalize on differing global tastes. After its combination with rival giant SABMiller, the company has over 500 beer names spanning every continent, including seven of the 10 most valuable beer brands in the world.

For most of those brands, it's all about brewing consistency so that loyal drinkers will keep coming back. Such is the case with Budweiser, the primary brew made at the Fairfield plant. Five ingredients are strictly controlled to make sure batches of Bud taste the same: (1) water, a leading contributor to taste differences, thus there's a strict filtration process across all factories; (2) barley malt; (3) yeast; (4) hops, the "spice" that flavors the beer; and (5) rice, a unique Bud ingredient that helps with consistency and a "clean" flavor.

For A-B InBev's sprawling operations, the consistency equation is also paired with cost control. Thus the company's vertical integration, or ownership of multiple stages of production from raw materials to distribution. For example, Budweiser owns and sources hops from Elk Mountain Farms -- the world's largest hop farm -- in the Idaho panhandle in tiny Bonner's Ferry.

2. Keeping up with demands

Beer is the third-most-popular beverage after water and tea, and A-B InBev makes the most of that fact (although it also has its fingers in tea, too, with a partnership with Starbucks involving America's largest ready-to-drink premium tea, Teavana). Huge factories around the globe have been dialed in for peak efficiency, producing about a third of all the beer consumed in the world. According to my tour, just the one factory in Fairfield -- the smallest of Budweiser's 12 in the U.S. -- can produce enough six packs in one production run for you to consume one a day for the next 250 or so years.

Having that kind of scale and brand diversity has been a competitive advantage. Worldwide beer demand has been stagnant for years, but the Budweiser parent keeps finding ways to get bigger. That implies it's growing by gulping down market share, a testament to a brand's ability to roll with changes and elevate its image above that of its peers. Compare that with results from struggling small American beer maker Boston Beer Company (NYSE: SAM), which reported third-quarter revenue down 2.5% year over year.

Through the first nine months of 2017, A-B InBev reported 4.1% year-over-year organic revenue growth, which measures in-house generated growth unaided by acquisitions of other businesses. The contributing factors to that number included overseas growth and "premiumization -- adding new brands and flavors that the company can charge more for -- in developed markets like the U.S.

Global beer sales have slowed to a crawl and tastes within the overall market are changing. That is most evident in the U.S. with the craft beer movement. Craft beer sales volumes were up 6.2% in 2016, and the number of U.S. brewers has boomed from just over 1,500 a decade ago to over 5,300 at the end of 2016.

With U.S. consumers valuing variety and innovative product, A-B InBev has added 10 craft brewers to its arsenal in recent years. The moves have come under fire from critics. "Craft" is defined as less than 6 billion barrels of annual production and less than 25% owned or controlled by a non-craft company. Getting bought by the global giant effectively eliminates the brewers from this definition. 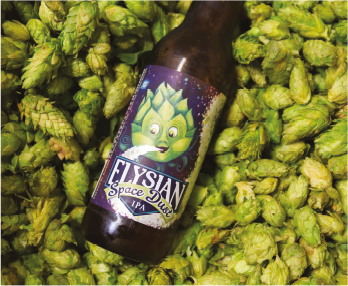 A-B InBev has nevertheless plugged its "craft" spoils into its own "high-end" portfolio, to great success. The beers have reportedly taken 0.3% more market share through the first half of 2017, helping offset Budweiser declines in the U.S. I was surprised, though, to see a Northwest favorite -- Seattle-based Elysian's Space Dust IPA -- on the production line during my tour in Fairfield. The company has been able to keep the label independent enough that demand for the brew is so strong that a bigger production facility than Space Dust's Seattle home was needed.

Regardless of your opinion of Budweiser or "corporate beer" in general, A-B InBev has muscled its way into the top spot in the world of brewing and is worthy of investment consideration. It has a forward price-to-earnings ratio of 23.5, reflecting short-term headwinds integrating SABMiller, and pays a 3.25% dividend yield.

Nicholas Rossolillo has no position in any of the stocks mentioned. The Motley Fool owns shares of and recommends Anheuser-Busch InBev NV, Boston Beer, and Starbucks. The Motley Fool has a disclosure policy.