You may have heard that Canadians are friendly. Well, that's certainly true in the case of these two Canadian energy companies. Both Pembina Pipeline (NYSE:PBA) and Vermilion Energy (NYSE:VET) not only pay dividends, but they make those payments monthly instead of quarterly, which can be great for investors who rely on regular dividend payments for their incomes.

But frequency of dividend payment is probably pretty low on the list of what most investors look for in a stock. Let's see just how friendly these companies really are to their shareholders. 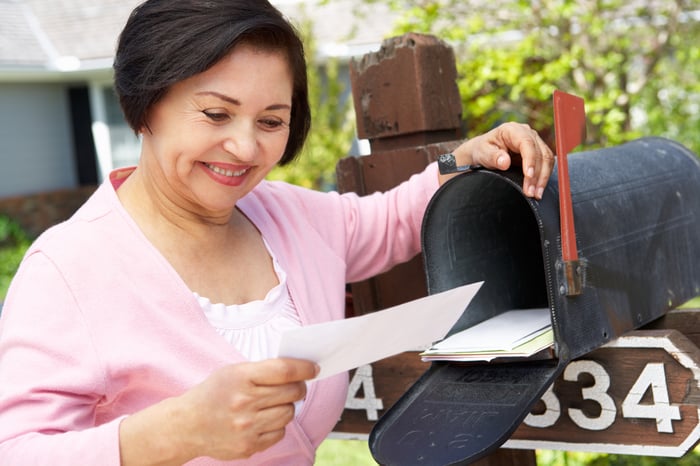 Who doesn't love getting money in the mail? These energy industry stocks will send a dividend check each month. Image source: Getty Images.

Even though Pembina has "pipeline" in its name, the company is actually a diversified midstream oil and gas company. That means that while it does indeed own and operate a large network of pipelines -- mostly in Western Canada -- it also operates storage facilities, natural gas processing plants, and terminals.

Like most other midstream companies, Pembina primarily operates on a "tollbooth" model: Companies wishing to move oil or gas products through Pembina's pipelines -- or its other facilities -- pay the company a fee based on the amount of product they move. This income structure tends to be reliable, and is insulated from the short-term fluctuations of energy prices. That's good for Pembina, which needs a very steady income stream to be able to make sure it can cut those checks each month to its shareholders.

Pembina also completed its largest-ever acquisition -- fellow midstream company Veresen -- in 2017, which adds to its Western Canada infrastructure and gives it additional exposure to the United States via the Alliance Pipeline, which transports natural gas and natural gas liquids from Western Canada and the Bakken Shale of North Dakota to Chicago.

While Pembina's operations are mostly confined to Western Canada, Vermilion -- an independent oil and gas exploration and production company -- has operations across the globe. About half its production comes from Europe, where it holds onshore acreage in the Netherlands, Germany, Hungary, Croatia, and Slovakia, as well as offshore holdings in Ireland. The other half is located in Western Canada, Wyoming's Powder River Basin, and the offshore Wandoo field in Australia.

Vermilion recently completed an acquisition of its own, buying a private Saskatchewan company for about CA$90 million. The acquisition gives the company additional holdings in Saskatchewan and Manitoba. It's a smart purchase for Vermilion, as the cost on a debt-adjusted cash flow basis was only 4.6 times estimated annualized 2018 fund flows from operations, and the company will be able to manage the holdings out of an existing regional office.

Still, Vermilion's yield is currently higher than Pembina's. And with the recent rise in oil prices, hopefully Vermilion's operations will stabilize and allow it to further pay down some of its debt. But investors should be aware it's a riskier proposition than Pembina.

Month in, month out

Creating a budget from just four dividend payment periods each year can be tricky, particularly for retirees. By investing in Vermilion or Pembina as a supplement to other dividend stocks in a diversified portfolio, however, investors can ease some of those concerns and -- in the bargain -- gain exposure to the improving oil and gas sector.