Some people invest in the cryptocurrency for the same reasons earlier investors bought the yellow metal.

Bitcoin has taken the investing world by storm. Proponents argue that bitcoin is a better store of value than U.S. dollars or even safe-haven commodities like gold.

Those who follow bitcoin will notice the parallels with the yellow metal. You can mine bitcoin just like you can mine gold, and while governments can issue as much currency as they choose, there's only a fixed amount of bitcoin that will ever exist, just as there's only so much gold on the planet. People have even gone so far as to talk about the "gold rush" toward bitcoin, and most of the symbolic physical representations of cryptocurrency tokens have them cast in shiny gold-colored coins.

Investors have certainly gravitated to bitcoin over gold, as the price chart below shows. 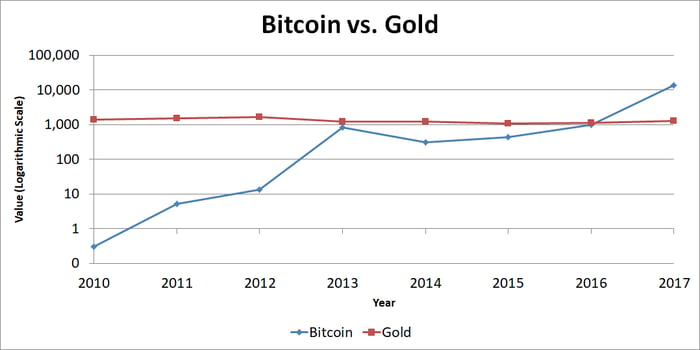 Data source: Ycharts. Prices as of year-end in U.S. dollars per bitcoin token or ounce of gold.

Yet in some respects, bitcoin can never replace gold. For those who like the feel of a physical asset, the electronic blockchain is no more reassuring an investment than having assets at a bank or brokerage account. Gold has intrinsic value in its application as a material in electronics, jewelry, dentistry, and other industries, while some question bitcoin's inherent value. It's also cheaper to keep gold safe. Even institutional investors who can usually get rock-bottom rates have to pay more than 1% to protect bitcoin, while gold investors can find protection for fees of less than 0.1%.

As long as bitcoin prices rise, many will see it as having taken gold's place. Yet for diehard gold investors, cryptocurrencies will never give the same satisfaction that hefting a coin or bar can bring.

Will Truist Spin Off its Large Insurance Unit?
405%