March is known for quite a few things. There's college basketball's "March madness." Julius Caesar was assassinated on the Ides of March. March flowers, of course, bring April showers. St. Patrick's Day brings out a lot of green clothes. And in much of the U.S., we have the beginning of daylight-saving time, when everyone has to remember to "spring forward" by setting clocks one hour ahead.

I think there's one other thing for which March should be known: a time to buy great stocks. Scientifically speaking, March is the best month of all to buy stocks. OK, I made that up. However, March is a great month to buy stocks, because for long-term investors, the sooner you buy a great stock, the more time you have to accumulate gains.

But what great stock to buy? Here's why AbbVie (NYSE:ABBV) is my top stock to buy in March. 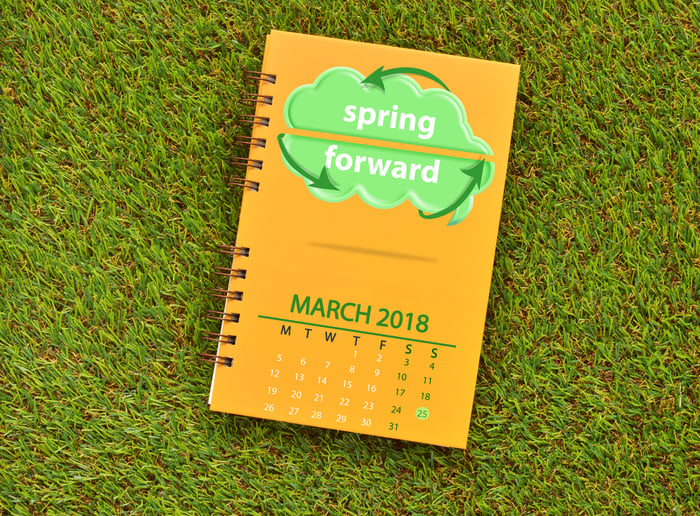 AbbVie stock is up more than 80% over the past 12 months and more than 15% so far this year. Some might ask, "Why not wait for AbbVie's share price to come down some and buy on the dip?" The answer is that you can't time the market. There's no way to know when AbbVie will have a dip -- or, perhaps more importantly, how far a dip might go.

There is one thing that you can time, though: when you can begin receiving AbbVie's dividend payments. If you buy the stock in March, you'll be eligible to get the pharmaceutical company's next dividend when it's paid on May 15. (Technically, anyone owning shares as of April 13 will receive the dividend, but why be a procrastinator?)

Believe me, you'll like AbbVie's dividend. The company recently increased its dividend payout by 35%, bringing the yield up to 3.25%. Dividend increases are a way of life at AbbVie. Since being spun off from parent Abbott Labs in 2013, the drugmaker has increased its dividend by a whopping 140%. Including the time that AbbVie was part of Abbott, the company has a track record of 46 consecutive years of dividend increases.

Dividends are good, but growth is great. AbbVie has definitely generated significant revenue and earnings growth in the past. Even better, that growth led to impressive total shareholder returns. In 2017, AbbVie ranked as the top big pharma stock in total shareholder return. It was the same story over the past three years and five years.

But what about future growth? There's more great news. Wall Street analysts project that AbbVie will increase earnings by an average annual rate of 17% over the next five years. They have solid reasons to be optimistic.

AbbVie's Humira claimed the title of top-selling drug in the world last year, with sales of $18.4 billion. The autoimmune-disease drug should bring in close to $21 billion in sales by 2020. Imbruvica, which AbbVie co-markets with Johnson & Johnson, made nearly $2.6 billion for AbbVie in 2017, an impressive 40% year-over-year jump. More strong growth should be in store for the cancer drug. New hepatitis C drug Mavyret appears likely to become the company's next blockbuster.

Rick Gonzalez, AbbVie's CEO, stated at a major healthcare conference in January that the company believes it will generate $35 billion in risk-adjusted non-Humira sales by 2025. Imbruvica and Mavyret will be key in making that happen, but so will AbbVie's pipeline. The company could have several new big winners on the way, including endometriosis and uterine fibroids drug elagolix, cancer drug Rova-T, and autoimmune disease drugs risankizumab and upadacitinib.

You might glance at the AbbVie's trailing-12-month price-to-earnings ratio of 34.5 and think the stock is expensive. That's not the case. Actually, AbbVie looks like a pretty good bargain right now.

Remember that in investing, the future is more important than the past. Instead of looking at AbbVie's valuation based on past earnings, look at its stock price in proportion to the earnings that the company should generate. AbbVie's shares currently trade at only 13 times expected earnings. And if you factor in the solid growth prospects for the drugmaker over the next five years, AbbVie stock appears even more attractively valued.

Like any stock, buying AbbVie comes with risks. That's especially true for a pharmaceutical stock, with the prospects of clinical failures and regulatory rejections. It's possible that AbbVie could encounter pipeline setbacks. The company is also heavily dependent on sales of Humira. Any headwinds for the drug would definitely hurt AbbVie.

However, the company has a pipeline that is both deep and wide -- plenty of drugs in multiple therapeutic categories. AbbVie could weather a pipeline setback or two relatively well. The company also appears to be on the right track to reduce its dependence on Humira.

AbbVie has what I consider to be a fantastic combination of a high dividend yield, a strong track record of dividend increases, excellent growth prospects, and relatively low valuation. I'm not sure there's a stock on the market that checks off all of those boxes as well as AbbVie does. In my opinion, there's no better time than now to spring forward in buying this top pharma stock.