Stratasys (NASDAQ:SSYS) reported fourth-quarter and full-year 2017 results last Wednesday. For the quarter, the 3D printing company's year-over-year revenue increased 2.3%, its loss per share narrowed, and earnings per share (EPS) adjusted for one-time factors rose to $0.16, from $0.15 in the year-ago quarter.

Stratasys beat Wall Street's expectations on both the top and bottom lines. Its 2018 earnings guidance, though, came in lower than what the Street anticipated because the company plans to increase its spending on initiatives aimed at fueling long-term growth. The market sent the stock plunging to a closing loss of 16.5% on Wednesday, though shares have fully recouped their losses as of Monday and are now priced at nearly exactly what they were before the post-earnings drop.

Here are three key things you should know about from Stratasys' fourth-quarter call (transcript via Seeking Alpha). 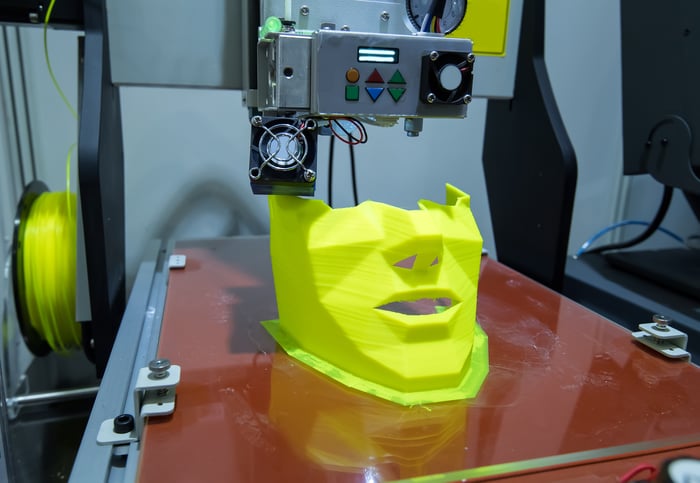 1. 3D printer sales increase for the first time in a long time

Within product revenue, system [3D printer] revenue for the quarter increased by 1%, compared to the same period last year, driven by continued demand of our F123 Series targeting [the] professional rapid prototyping application, as well as initial sales of our new J700 Dental Solution and our H2000 Large Part FDM 3D Production System.

A 1% year-over-year revenue growth rate from 3D printer sales is hardly the type of growth investors want to see. Moreover, the quarterly system revenue got a boost from some sales that were pushed back from the third quarter. Nonetheless, it's a promising sign, as this metric has been sliding for three years, with the same true of prime rival 3D Systems (NYSE:DDD). For instance, Stratasys' year-over-year 3D printer revenue declined 11%, 6%, and 6% in the first, second, and third quarters of 2017, respectively, and it suffered double-digit drops in several quarters in the preceding two years.

The more important news is that CEO Ilan Levin said that the company anticipates that system revenue will "continue to grow." 3D printer sales have an outsize importance because they're the "razors" in Stratasys' razor-and-blade-like business model and drive sales of the high-margin print materials and service contracts, or "blades."

There was much talk on the call about the new metal 3D printing technology that Stratasys has developed and plans to commercialize. Here are some of the most relevant snippets from Levin's remarks:

We're starting with aluminum and that was certainly a market-focused choice, not a technology limitation. ... I think some of the things that we would be looking at in terms of applications would be short-run production in automotive, highly customized parts for high-end automotive and aerospace industries.

Stratasys said that it developed its metal platform internally over the past several years, incorporating the company's proprietary jetting technology. Management didn't provide a timeline for commercialization and launch, but said that it would release more details at the RAPID + TCT 3D Printing Conference, which runs April 23-26 in Fort Worth, Texas.

With respect to the H2000 ... We had a nice large order that we received in Q4 and were able to ship, install and have that accepted by the customer. ... Here the product launch is a little bit different in nature [than our lower-end products]. The commercialization of a system of this size is more on a crawling basis. But absolutely, we're deep in customer engagement with the [belief] that we [will] continue to place systems on a regular basis now.

The H2000, which was initially introduced as the Infinite Build 3D Demonstrator, is designed to produce large parts made of engineering-grade plastics. Boeing and Ford were Stratasys' development partners on this system. Stratasys sold its first H2000 in the third quarter and, as Levin noted, sold another one in the fourth quarter. Unfortunately, the company doesn't divulge customer names or even industries, but the fact that two of these large systems have now sold is a promising sign. Customers who are plunking down big money for such a system surely do so only after a good amount of testing. As Levin said, Stratasys foresees continuing to sell these systems on a regular basis.