Sometimes knowing something is a bad idea is not enough to stop a person from doing that thing anyway. In many cases, a small mistake can lead to a large amount of misery.

"You really are playing with fire when you let someone else use your credit card, so proceed with caution," said CreditCards.com senior industry analyst Matt Schulz in a press release. "Whether they spend more than you anticipated, don't pay you back, or you never see the card again, ultimately, you are the one who is responsible." 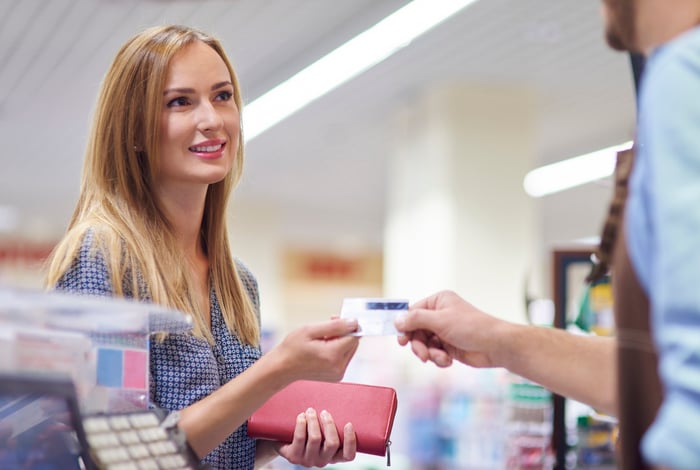 Be careful who you hand your credit card to. Image souce: Getty Images.

To put the depth of this problem into perspective, it's worth noting that there are roughly 252 million adults in the U.S. Not all of them have credit cards and many have the common sense to not lend theirs out, but of the total adult population in the country over 14% have been burned when lending out a credit card.

The biggest problem that occurred (with 19% of the vote) was overspending. That was followed by not getting paid back (14%) and not getting the card back (10%).

Nearly half (49%) of present or former credit card holders admitted that they have let someone else use their card with 35% saying the outcome was unfavorable. Younger adults were the most likely to be burned.

"Half of Millennials (ages 18-37) who loaned their credit card faced a negative result, compared to 31% of Gen X (ages 38-53) and 26% of Baby Boomers (ages 54-72)," according to the report. In addition 52% of those surveyed who made less than $30,000 reported problems from loaning a card out compared to less than a third of those making more than that.

This is a bad idea

Over half (61%) of people who have at some point held a credit card said they would let an immediate family member borrow it. That includes 49% who would be comfortable with the person doing the borrowing spending over $100 while 12% would only lend their card providing the amount spent stay below that threshold.

Lending your credit card to someone is more dangerous than handing them money. If someone spends your cash, then you're only out money if they don't pay you back.

When someone uses your credit card, the person is taking on a debt in your name. That can lead to problems -- including a lower credit rating -- if you fail to pay the money back.

It's hard to say no to family, friends, and even significant others, but realize that handing over your credit card is a risk. Work with the person who may want to borrow your card, but keep it safely tucked in your wallet.