Please ensure Javascript is enabled for purposes of website accessibility
Log In Help Join The Motley Fool
Free Article Join Over 1 Million Premium Members And Get More In-Depth Stock Guidance and Research
By Rich Duprey - Mar 7, 2018 at 7:19AM

The saying "as you sow, so shall you reap" seems to be one of the biggest problems confronting Harley-Davidson (HOG 5.12%) right now.

The bike maker rode a wave of sales higher on a carefully crafted image of the outlaw biker that it sold to its core customer of middle-aged males who would strap on leather jackets, boots, and a brain bucket for a show of rebelliousness. 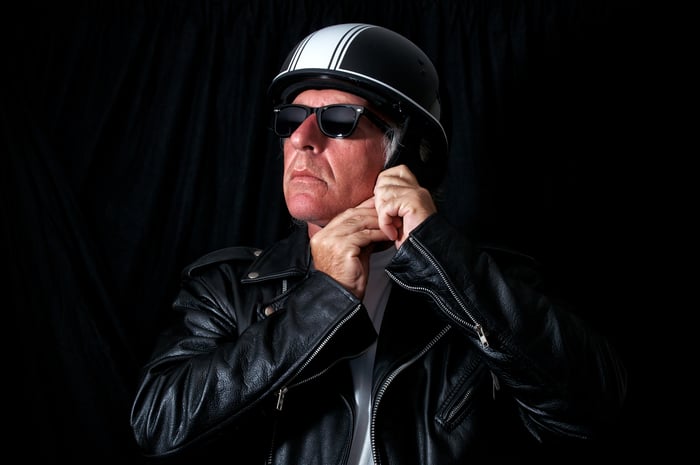 When times were good, the association worked and shipments of Harley-Davidson motorcycles surged to a peak of 349,000 bikes in 2006, a 70% increase from just six years earlier. But these weekend warriors got shaken out in the collapse of the financial market, and they stopped buying Harley's big, expensive bikes.

Shipments of motorcycles fell to 210,500 by 2010, and while the bike maker clawed its way back to almost 271,000 motorcycles shipped four years later, Harley has been on a downward slope ever since, and last year it only shipped 241,500 bikes to dealer. Management forecasts that at best only 236,000 bikes will get out the door in 2018.

The problem is today's new crop of bike buyer isn't interested in the motorcycle gang persona or in paying a premium for a heavyweight bike. They are turning their back on the brand, which is why U.S. sales of Harley-Davidson motorcycles fell 8% last year and are down 13.5% over the past three years. Globally, they're down 6% and 10%, respectively. 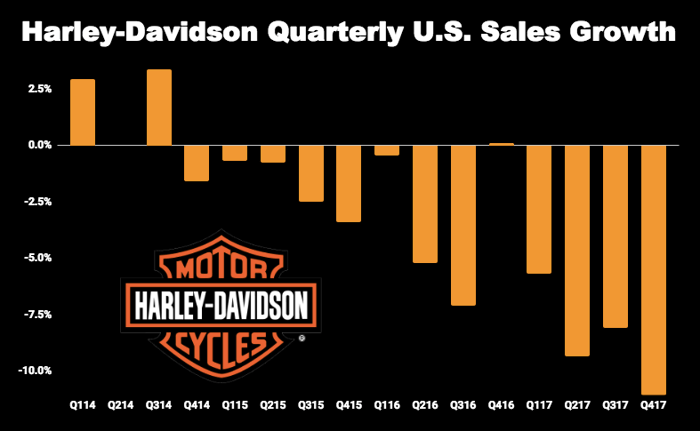 It's not certain Harley-Davidson has an understanding of what the problem is. Although it gives the appearance of addressing the issue by committing to bring in 2 million riders to the brand over the next 10 years during which time it will introduce 100 new models, offer training to new riders, and promote the concept of adventure travel, it's not really confronting the core problem that its bikes don't appeal to the new demographic of young, urban, and female riders to whom being a rebel rider is not a priority.

Moreover, the motorcycles it's making are still pretty much a variation on a theme. They're still big, still heavy, and still loud, though that's admittedly an aftermarket feature. The fact is that depiction of Harley-Davidson motorcycles and the outlaw image many of its riders have embraced may be too deeply ingrained to change.

Because its core customer is aging out and the new breed of rider is not interested, Harley may be caught in a vortex it can't escape.

The paradox is that rival Polaris Industries (PII 1.97%) doesn't have the same problem. Although its Indian Motorcycle brand also offers a large selection of heavyweight bikes, sales continue to be brisk.

Sales surged 17% in the fourth quarter, and in the words of Chairman and CEO Scott Wine, the brand "massively outperformed" the industry for all of 2017 and gained significant market share.

The difference may be Indian motorcycles don't carry that same stigma. Also, some of its most popular bikes have been its midsize motorcycles, like the Scout and Scout Sixty.

To change direction, Harley-Davidson needs an extreme makeover. Rather than making these hulking iron horses, it needs to produce smaller, lighter-weight, and cheaper bikes. It also needs to cultivate younger riders. Not just the millennials, but kids just getting their first taste of riding on off-road tracks. That's when many people develop their love of motorcycles, and making them available in its showrooms could go a long way toward creating a customer for life.

While it seems to be giving a nod to this new rider by developing an electric motorcycle, this seems more of a vanity project for Harley rather than responding to an urgent need in the marketplace. Not even carmakers have figured out how to make a profit with electric vehicles yet. It's one reason Polaris isn't moving forward yet with one, despite having the expertise available with its Brammo division. CEO Wine says show him how to make money with an e-bike, "and we will be all in."

To change Harley will probably require a change at the top. Existing management seems too vested in its current priorities to seek out a different path, and with a board of directors that has little to no knowledge of the industry, Harley cannot effectively challenge the status quo.

And frankly, all the change may not work. Completely reinventing itself is no easy task, and Harley risks alienating its core buyer, even if they are buying fewer bikes, while not being believable to the new crop of buyers.

The status quo has led Harley-Davidson to lose more than 20% of its value over the last three years, a period of time when the S&P 500 has gained nearly 30%. While its stock trades at significantly discounted values across numerous metrics, there's no reason it can't go lower still if it doesn't change direction or its image.

While it might not be a problem completely of its own making, it is one that it has nurtured over the years. But being a rebel is no longer serving it or investors well.