T-Mobile (NASDAQ:TMUS) knows it's at a big disadvantage compared to Verizon (NYSE:VZ) and AT&T (NYSE:T). Even after years of industry-leading growth, T-Mobile still has tens of millions fewer customers than its larger competitors. Its scale is its biggest disadvantage by management's own admission.

But T-Mobile has turned that weakness into a strength. With the understanding that scale provides a big margin unlock on the high fixed costs of operating a wireless network, T-Mobile has aggressively attracted customers in ways that destroy margin for its competitors but unlock it for T-Mobile. T-Mobile's strategy is to scale as rapidly as possible while maintaining average revenue per user. 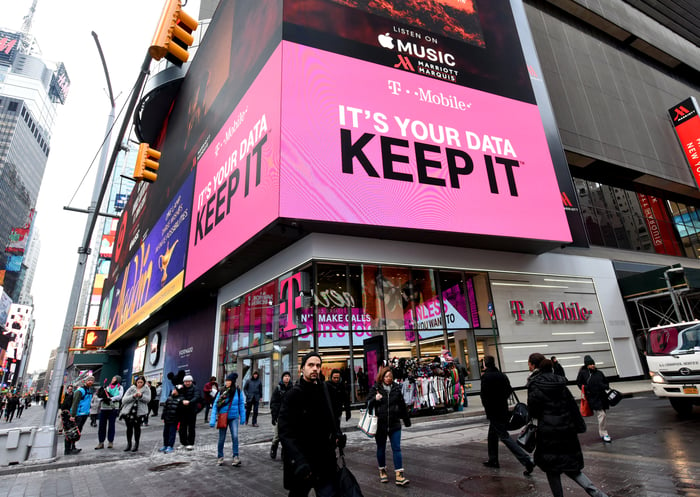 T-Mobile periodically offers customers more value through what it calls "Un-Carrier moves." Those moves include things like unbundling smartphone devices from service plans, removing music and video streaming from data caps, switching to a single unlimited data plan, and including taxes and fees in its pricing.

As T-Mobile adds more customers and sees leverage in its fixed operating expenses, it can either let the increase in profits flow to the bottom line or it can reinvest the excess margin in adding value to its service. Higher value plans, in turn, attract more customers to T-Mobile, creating a virtuous cycle.

AT&T and Verizon, meanwhile, are forced to play catch-up with the moves T-Mobile makes. T-Mobile's aggressive pricing has put pricing pressure on its larger competitors, which have seen service revenue fall considerably since T-Mobile started this strategy about five years ago. That trend is just starting to turn around for Verizon and AT&T.

T-Mobile has been able to expand its EBITDA margin since it started its Un-Carrier moves. Adjusted EBITDA margin went from 26% in 2013 to 37% in 2017. While postpaid phone average revenue per user has fallen a bit since then, that number has been relatively stable since 2015.

Despite its goal to maintain stable average revenue per user, T-Mobile is willing to be more aggressive on pricing under the right circumstances.

T-Mobile also offers a special deal for couples 55 years and older. When compared to other demographics, people over 55 years old, on average, are much more credit worthy, don't switch carriers as often, and don't use as much data. That makes them more profitable when signing up on a regular T-Mobile plan, but T-Mobile can attract more of those customers and keep its profit margin stable if it lowers pricing for that group. Verizon is experimenting with a similar offer in Florida.

While Verizon and AT&T are looking for ways to keep revenue per user from shrinking further by offering higher priced plans, T-Mobile is looking for ways to cut its prices or increase the value of its plan while maintaining price and funding it through an increase in scale. That's how it's turning its biggest disadvantage into a big advantage.