Shares of Autodesk (NASDAQ:ADSK) surged on Wednesday after the software company reported fourth-quarter 2018 results that beat analyst estimates. Both revenue and earnings came in above expectations, overshadowing first-quarter 2019 guidance that fell a bit short. Autodesk stock was up about 12.6% at 10:45 a.m. EST.

Autodesk reported fourth-quarter revenue of $553.8 million, up 15.7% year over year and about $9 million higher than the average analyst estimate. Subscription plan annualized recurring revenue reached $1.18 billion, up more than 100% year over year, with the company adding 371,000 new subscribers during the fourth quarter. 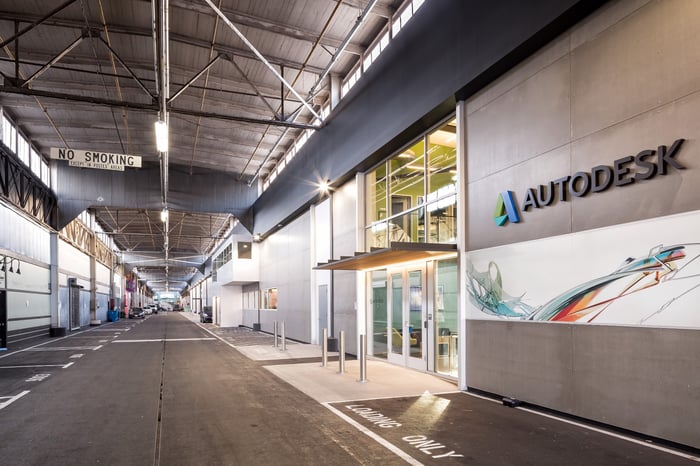 Non-GAAP earnings per share came in at a loss of $0.09, up from a loss of $0.28 in the prior-year period. The company lost $0.79 per share on a GAAP basis, with a tax benefit of $24.8 million preventing an even steeper loss. Total GAAP operating expenses were up 17.7% year over year, growing a bit faster than revenue.

Autodesk CEO Scott Herren commented on the company's ongoing shift to subscriptions: "During the quarter we reached another significant milestone in our business model transition where subscription plan ARR surpassed maintenance plan for the first time, in-line with our projections."

Autodesk expects to produce between $550 million and $560 million of revenue during the first quarter, after including the impact of a new revenue accounting standard. Analysts were expecting revenue guidance of $585 million. Non-GAAP earnings per share is expected between $0.01 and $0.04, also below analyst expectations of $0.16.

While Autodesk's guidance fell short of expectations, strong fourth-quarter results and significant growth in subscribers have investors pushing up the stock price.