Carvana Co. (NYSE:CVNA), which sells used cars online and delivers them via distinctive "vending machine" retail facilities, reported on March 6 a net loss of $47.2 million for the fourth quarter, versus a loss of $35.7 million a year ago. That's despite sales and revenue that were both more than double the prior-year period.

Carvana's quarter in a nutshell

Carvana, which went public in April of last year, is currently in aggressive expansion mode. It has been using the proceeds of its initial public offering to fund new brick-and-mortar retail sites, which it calls "markets," across the United States. 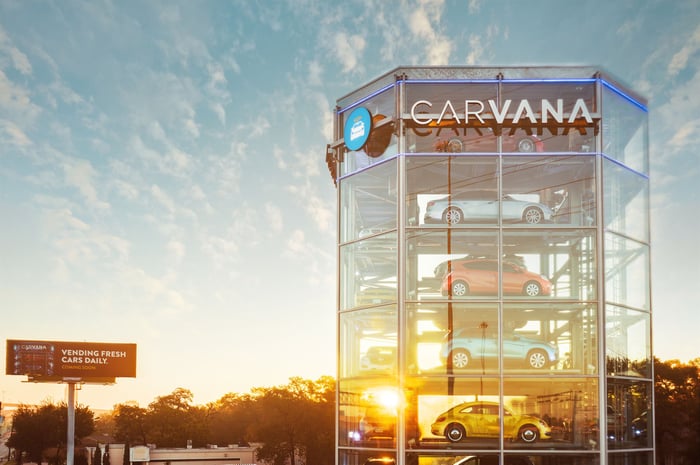 The "vending machine" tower at a Carvana market in Houston. The tower automatically selects and lowers a car when a special token is deposited. Image source: Carvana Co.

Carvana opened five new markets in the fourth quarter, bringing its total to 44 as of the end of 2017, up from just 21 a year prior. Carvana's sales and revenue both more than doubled from a year ago, but its 141% sales growth fell just short of its own guidance, which had called for an increase of between 143% and 168% from the fourth quarter of 2016. Gross profit per unit of $1,619 fell into the upper part of its guidance range, and was up from just $435 a year ago -- but it was down sequentially from $1,742 in the third quarter of 2017.

Still, things are trending broadly in the right direction. Among other improvements, Carvana's customer acquisition costs are falling, thanks to operational improvements as the company expands and reduced reliance on advertising.

CEO Ernie Garcia said that the company's rapid growth has made for imperfect guidance predictions:

We are growing rapidly and have more conviction than ever about the business we are building. At the same time, extremely rapid growth paired with a relatively thin operating history has occasionally made the path difficult to predict. Our retail unit sales came in just below our guidance range for Q4 and the full year, largely attributable to weaker than expected results from our Cyber Monday promotion. That said, we are proud of our substantial growth and total GPU gains this year, and as you'll see in our 2018 guidance, we expect our fifth straight year of triple digit top-line growth for Carvana.

For the first quarter, Carvana expects:

Garcia noted that Carvana has already opened 10 new markets in 2018, bringing its total to 54 as of March 6.

Carvana's guidance for the full year is as follows: