First Data's retreat can be traced back to solid, if not spectacular, quarterly earnings issued in February. The company released its fourth-quarter 2017 report on Feb. 12. Total segment revenue (i.e., total revenue less network reimbursement fees) grew 7% to $1.9 billion, and organic segment revenue inched up by 4%.

Performance was led by the company's largest segment, global business solutions (GBS), which achieved 10% top-line growth to $1.1 billion (a 4% increase on an organic basis). Certain international regions within GBS exhibited swift expansion, such as Latin America, which achieved 44% reported growth to $78 million and 52% organic growth, due to strong sales in Argentina and Brazil. However, revenue in North America remains sluggish and came in flat on an organic basis during the fourth quarter. 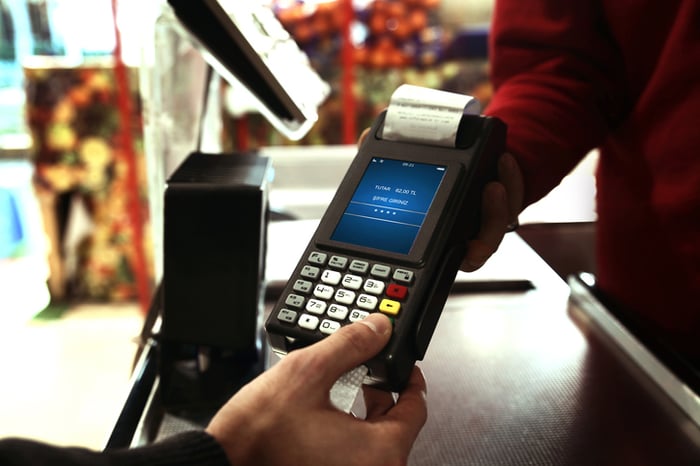 During the company's earnings conference call, management expressed confidence that the North American business would return to more vibrant growth, given the $1.5 billion the organization spent on the recent acquisitions of merchant technology specialist BluePay and ERP solutions provider CardConnect.

As my colleague Matthew Cochrane points out in a more in-depth article on First Data's earnings, shareholders likely harbor some reservations about these acquisitions, as they've added debt to the company's balance sheet. However, on the earnings call, management pointed to $1.3 billion in free cash flow generation in 2017 as ample evidence that it can support current debt service.

Over the next few years, First Data's recent acquisitions should have a palpable impact on both top and bottom results, similar to the company's 2012 acquisition of cloud-based Android point-of-sale platform Clover. Over the next couple of quarters, though, there doesn't appear to be a catalyst that will appreciably boost shares. Current-year guidance calls for a modest revenue increase in the range of 5% to 7% and a marginal improvement in free cash flow to $1.4 billion.

The bottom line? While First Data doesn't currently possess the luster of its smaller rivals in the payments space, it does offer rising earnings from a stable customer base.