Taking a long-term approach to investing sounds great in principle, but it can actually be difficult to put into practice for many investors. That's because many people get caught up in the daily financial news cycle or view one bad earnings report as a telltale sign that the company is doomed.

But picking great companies and holding them for years can be a great way to grow your wealth -- if you know where to look. That's why we asked a handful of Motley Fool contributors for three stocks that investors can buy now and hold for decades. They came back with Apple, Inc. (AAPL -0.34%), Berkshire Hathaway (BRK.A 0.07%) (BRK.B 0.10%) and 3M (MMM 0.79%). Here's why. 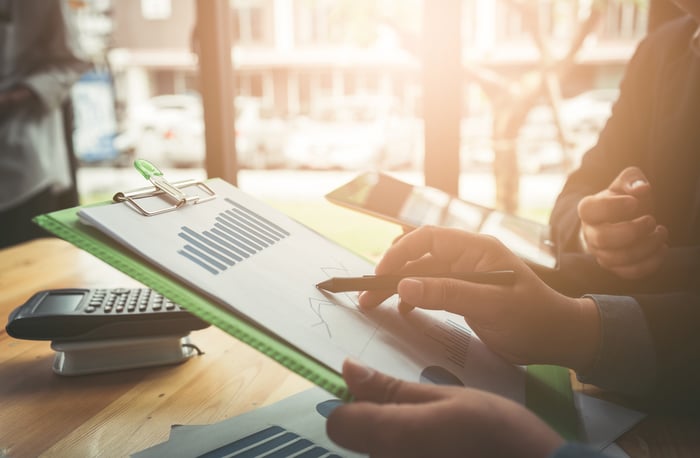 Todd Campbell (Apple): Warren Buffett jokes that when he buys a smartphone, Apple should consider the market saturated. His aversion to the devices, however, hasn't kept him from turning Apple into Berkshire Hathaway's biggest holding. The Oracle of Omaha owns an eye-popping 165 million shares of Apple, so he appears convinced that Apple will continue to benefit from technology tailwinds that are making consumer electronics more intuitive and useful.

According to International Data Corporation (IDC), Apple's smartphones accounted for 19% of all smartphones sold and its Apple Watch increased its wearables market share to 21% in Q4. Apple's popularity helps its ecosystem profit, fueling revenue for high-margin services such as apps and entertainment, too.

Admittedly, consumer-electronics companies battle tooth and nail, but Apple has demonstrated enviable staying power over the years. And thanks to premium pricing, it's got pockets deep enough to stay on the cutting edge. Investments in artificial intelligence should help establish Home Pod, its new virtual assistant, in the fast-growing Internet of Things marketplace. Additionally, Apple's investments in healthcare, including wearable sensors that can help patients with heart disease and diabetes, put the company in a position to tap into $3.3 trillion in annual U.S. healthcare spending.

Overall, if you believe that consumers will continue embracing increasingly intelligent consumer electronics, it's hard to argue against making Apple a forever investment in portfolios.

John Bromels (Berkshire Hathaway): The idea of holding onto a single investment -- any investment -- for decades is a scary one. Who knows what situations might arise and throw a formerly safe company for a loop? That's why, over the long term, there's safety in diversity. It pays to invest in a wide variety of industries to ensure that one narrow issue doesn't become a problem for your entire portfolio.

It doesn't get more diverse than Warren Buffett's Berkshire Hathaway, which has holdings in industries as varied as insurance (GEICO), railroads (Burlington Northern Santa Fe), and food (Dairy Queen, See's Candies), as well as additional stakes in many other corporations in diverse industries. That makes the company about the safest opportunity I can think of for an investor who intends to check his or her portfolio only occasionally.

Of course, one of the company's greatest assets is 87-year-old Buffett himself, who's unlikely to continue running the company for decades -- although frankly, I wouldn't put it past him. Some investors might be concerned about what will happen when the "Oracle of Omaha" hands over the reins to someone else. And while it's almost impossible to conceive of a Berkshire Hathaway without Buffett at the helm, the company's current holdings and asset-management strategy will certainly endure without him. After all, it's a strategy that's produced returns that beat the market -- if only slightly -- over the past one-, three-, five-, and 10-year periods. It seems likely to continue that streak well into the future.

Pick this conglomerate and let it do the work for you

The conglomerate isn't a fast-growing company by any standards. Sales in the recently reported fourth quarter ticked up by 9% year over year, but what you get from 3M is slow, consistent growth over decades and a dividend, to boot.

The company's trailing dividend yield is about 2%, and 3M has raised it for a staggering 60 straight years. That's impressive on its own, but the company's shares have outpaced the market quite nicely, as well. 3M's shares are up 214% over the past 10 years, easily beating the S&P 500's 114% gains.

3M's management is expecting 5% to 7% revenue growth in 2018 and the company is continuing its focus on finding new revenue streams by investing about 6% of its revenue into its research and development division. That will help the company continue to add to its expansive list of 60,000 products and keep it on track to file new patents. (It files about 3,000 every single year.)

Investors looking for a company that's focused on long-term growth should certainly give 3M a close look. The company won't grow at breakneck speeds like other stocks, but it knows how to keep a steady, marathon pace.