Congratulations are in order to James Pitaro, who was recently announced as the president of the The Walt Disney Company's (NYSE:DIS) ESPN family of networks. But Pitaro will have his work cut out for him.

It's not much of a stretch to say that Pitaro may have the toughest job at Disney -- and that includes Disney CEO Bob Iger. After all, the beating heart of Disney's profit is its media-networks division, which is powered by the ESPN line of networks. Lately, Disney's stock price has struggled due to ESPN's poor performance -- shares are flat over the last three years versus a 30% gain from the greater S&P 500. 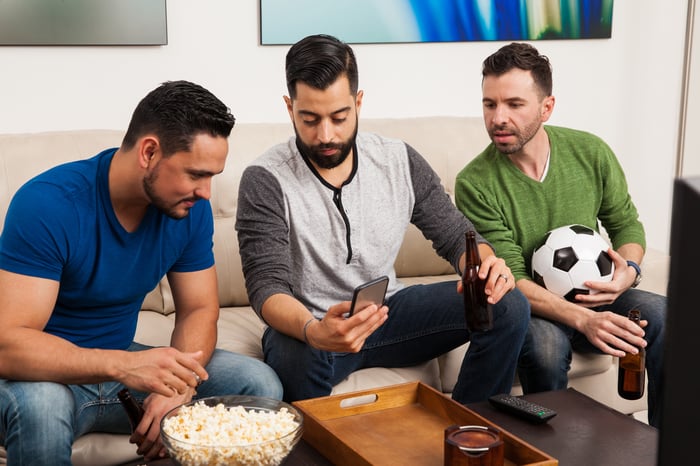 John Skipper's tenure will be considered mixed -- at best

Pitaro is replacing George Bodenheimer, who temporarily served as the Acting Chair of ESPN after John Skipper, who had held the title since 2012, resigned late last year amid substance-abuse issues..

While pleasantries were exchanged upon Skipper's departure, it was likely a positive for investors. There were a few notable missteps that occurred on Skipper's watch, even beyond the substance addiction problem he admitted to. Other issues included the perception that ESPN had ventured too far from reporting sports and into the political realm and mismanagement of Disney's digital channel, which included not redesigning its website -- one of the most trafficked on the planet -- in six years .

However, Skipper's real blunder was leading poor contract deals for sports rights. It's widely believed that ESPN vastly overpaid for NBA and NFL rights, to the point where NBA players were delaying long-term contracts until post-deal and entire NCAA football conferences were reorganizing to angle for better TV deals. Below is a sample of the sports-rights deals that occurred under Skipper and the percentage increases.

Attempts to pass content costs to consumers have failed. The network has increased its monthly cable fees to the tune of 54% in six years, but many price-sensitive customers have abandoned the channel by selecting to go without cable altogether or selecting skinnier packages without the network. The chart shows the persistent subscriber losses from the Skipper era: Chart Data: ESPN's 10Ks. Figures in millions and as of Disney's fiscal year.

When price increases were no longer effective in offsetting the exploding cost of content, it forced the network to clean house, resulting in three rounds of layoffs .

An easy solution to ESPN's woes isn't in the offing

Don't expect a quick turnaround for ESPN, as many of these contracts are for multiple years. Additionally, demand for sports rights, particularly the NFL, will remain high, with competition from new entrants -- technology companies like Amazon and Facebook, which have deep pockets and are looking for a way to boost their respective utility. Additionally, traditional broadcast media from Fox and CBS will continue to offer large sums for television rights.

The low-hanging fruit appears to be in Pitaro's wheelhouse: digital. Prior to his promotion, Pitaro served as chairman of Disney's Consumer Products and Interactive Media since 2016. Recently, Disney announced it will bring a streaming-based service to the market -- ESPN Plus -- that will cost $4.99 per month. While initially, ESPN Plus will not feature access to ESPN's live channels and thus not likely be a game changer in the short run, it will be a source of additional revenue and allow the company to take calculated bets on how to make money in an increasingly cable-free world.

Disney's strong, diversified business lines will afford the company the time to turn ESPN around, and the pure volume of its content may make it a strong business. ESPN's turnaround, however, will be a long-term project, and the road could be bumpy in the short run.