Toys R Us could liquidate -- and cripple Mattel's sales.

Toys R Us is all but dead -- and that's bad news for toymaker Mattel (MAT 0.54%), as we learn today in a downgrade covered by StreetInsider.com (requires subscription).

We've known that things were bad at Toys R Us since as far back as September, when it was revealed that the company had hired experts to help it restructure its debt in a bankruptcy filing. Yesterday, citing "people familiar" with the plan, The Wall Street Journal reported that Toys R Us may go even further -- not just restructure, but actually throw in the towel on the toy business entirely, liquidating both its stores and its inventory.

According to British banker Barclays, such a move could take Mattel down with it. Here's what you need to know. 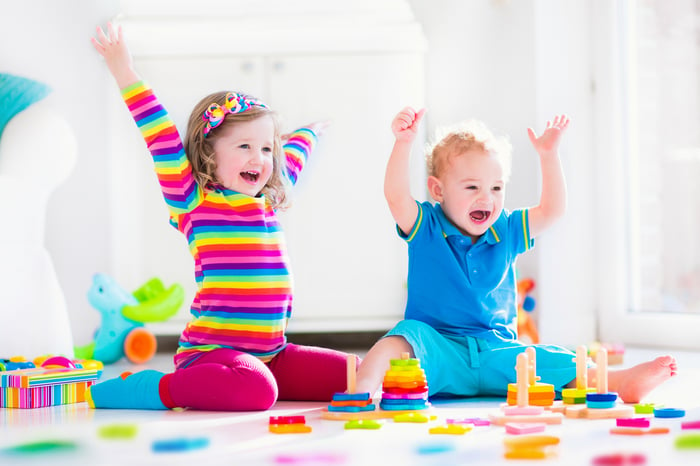 Kids may be happy when Toys R Us toys go on sale soon -- but investors in Mattel won't be cheering. Image source: Getty Images.

Toys R Us announced it had filed for Chapter 11 bankruptcy protection on Sept. 18, saying it would continue to operate all its stores normally. Now, however, the Journal reports that "a weak holiday season" has "torpedoed" Toys R Us' chances of working a successful restructuring.

Despite Toys R Us' massive size -- it did more than $11 billion in sales last year -- the company is losing money and may be forced to close all of its roughly 800 U.S. stores. (Note: Toys R Us also operates more than 800 stores internationally -- no word yet on their fate.) According to data from S&P Global Market Intelligence, which is able to track Toys R Us' fortunes through its SEC filings as an issuer of public debt, Toys R Us reported losses of more than $600 million through the 12 months ending Oct. 28, 2017, and hasn't reported a full-year profit since 2013.

Why that's bad for Mattel

According to Mattel's SEC filings, Toys R Us is among Mattel's three largest customers, accounting for $400 million of the toymaker's sales. That makes Mattel small beans to an operation as big as Toys R Us. However, for Mattel, Toys R Us purchases represent more than 8% of total sales -- all of which could vanish if Toys R Us goes belly up.

Barclays predicts that a Toys R Us liquidation would result in "cash flow and balance sheet degradation" at Mattel. The analyst believes that if this comes to pass, Mattel's stock price could fall as much as 19% from current levels around $16. Accordingly, the analyst is downgrading Mattel stock to underweight and assigning the shares a $13 price target -- 19% below where Mattel stock trades today.

The danger could be especially great in the short term. Sure, on the one hand, a liquidated Toys R Us would no longer be able to purchase toys from Mattel for distribution, hurting Mattel's sales on an ongoing basis -- but that's the good news. The bad news is that in the short term, liquidation sales at Toys R Us would flood the market with cheap toys, as Toys R Us sells off all of its inventory at fire-sale prices.

What's more, because less than 4% of the toys that Toys R Us sells are Mattel toys, this means that 96% of the liquidated Toys R Us inventory would be competing with Mattel through other outlets -- Walmart, Target, Amazon, what have you. That flood of discount inventory cascading onto the toy market could devastate Mattel's sales in the short term.

No wonder Mattel stock is down 6% in response to Toys R Us' news this morning. And if Mattel stock goes 19% lower, as Barclays predicts? Well, you shouldn't wonder about that, either.

Should You Buy Mattel After Disney Toy Deal?
376%