While robot armies are not yet taking over America's office jobs, automation has been popping up in ways that are visible to the public.

Fast food chains have, for example, been using kiosks instead of people to take orders and grocery chains have long been using cashier-free checkout as an option. Look a little deeper and you'll see factory jobs once held by people performed by actual robots and mechanical workers functioning alongside humans in Amazon fulfillment centers.

Automation and robots are becoming a reality that already has and will continue to displace human workers. Despite that, only 1 in 5 Americans expect that their jobs will become obsolete in the next 50 years, according to a 2016 Pew Research report.

Unfortunately, at least for workers hoping to avoid seeing their jobs become automated, more people should be worried. Nearly half (47%) of all jobs in the United States are at high risk of automation in the future, according to a 2013 report from Oxford researchers Carl Benedikt Frey and Michael A. Osborne.

That number may be high or it may be low. The reality is that technology exists to automate many jobs already and whether it will be implemented becomes a question of upfront cost versus long-term benefit. 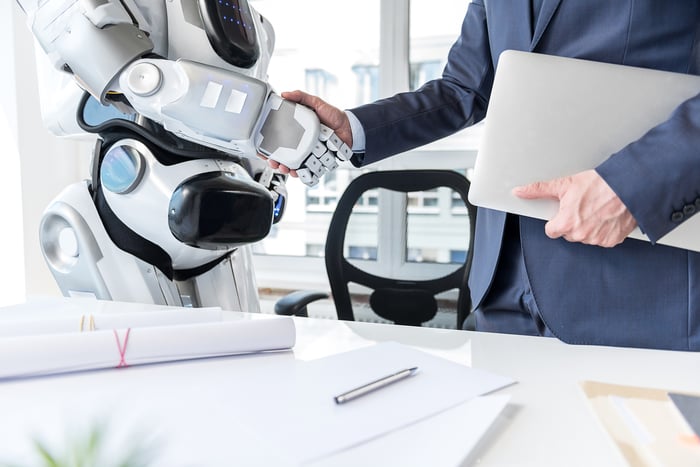 Where will jobs be automated?

Fast food, led by McDonald's (NYSE:MCD) has been leading the way when it comes to automating some front-end service jobs. This is done partly to eliminate long-term labor costs, but also due to the practical concern over the current low levels of available help in some markets. In addition, a human can hear "hold the sauce" as "heavy sauce" or make some other input error on an order while that's less likely on a kiosk.

Automation will impact different areas of the country in different ways, according to a new report from Creditloan.com. The data shows that while few areas will be immune to robots and automation replacing human workers, some will be more vulnerable than others.

"Certain pockets of the nation possessed a better outlook than most, including much of the Northeast. Metropolitan areas ranging from New York to Maine had low or middling percentages of their populations susceptible to automation replacement," wrote Creditloan Founder Daniel Wesley.

The Pacific Northwest has a similar makeup, though there are some exceptions in both Washington and Oregon. The hardest hit areas will be those that have historically been hotbeds of manufacturing. These areas include Pennsylvania and Wisconsin which have already been hit hard by manufacturing job losses.

"Our findings suggest such losses could continue or intensify with ongoing automation," wrote Wesley.

There's no specific rules for which jobs will be automated, but anything that involves repetitive tasks, data entry, or simple interactions with the public looks vulnerable. You can argue that the McDonald's kiosk should do a better job than the human it replaces while lowering costs and maybe increasing what people order due to lack of shame.

Factory workers have perhaps already suffered more than any other field when it comes to automation. What's clear is that just because a job can be automated does not mean it will be. For many companies, the decision comes down to its ability to hire quality workers at a reasonable price versus the up-front expense of automation. When the delta between the two tips toward automating, many companies will.

As a worker, avoiding being replaced by a robot involves gaining skills that are not easily duplicated. In an extreme example, surgeons, therapists, and school teachers are among the least-likely jobs to be automated.

"Among professions dominated by either men or women, however, the roles most immune to automation required extensive education or specialized training," wrote Wesley. "While advanced degrees aren't the only path to big earnings, they may be the best guard against becoming obsolete."

Education has long been a pathway to better jobs, but in this case even well-trained workers may need to further their skills. That's especially true for areas like machine operators that require a high-level of training, but are also likely to be automated.

Should You Be Worried About a Robot Taking Your Job? @themotleyfool #stocks $MCD Next Article
Current