It's going to be a challenging summer for Central Florida's theme parks. Tourists may already be looking ahead to 2019, when Disney (NYSE:DIS) opens Star Wars: Galaxy's Edge at Disney World and Universal Orlando counters with a yet unnamed Harry Potter-themed roller coaster.

The big draw to the area this summer will be Toy Story Land at Disney's Hollywood Studios, and the theme park giant surprised the market by recently announcing a June 30 grand opening date. The date comes five weeks later than last year's critically acclaimed Pandora - The World of Avatar addition that opened in time for last year's Memorial Day holiday weekend and the first few weeks of area schools letting out for summer vacation.

Throw in the higher ticket prices that were announced last month -- something that Disney has done for 30 years in a row, but always a hot topic when it's holding back on new experiences -- and you have a potentially weak outlook for the telltale travel season. Things don't have to play out that way. Let's go over a few things that may help Disney, Comcast, and perhaps even SeaWorld Orlando grow their turnstile clicks this summer. 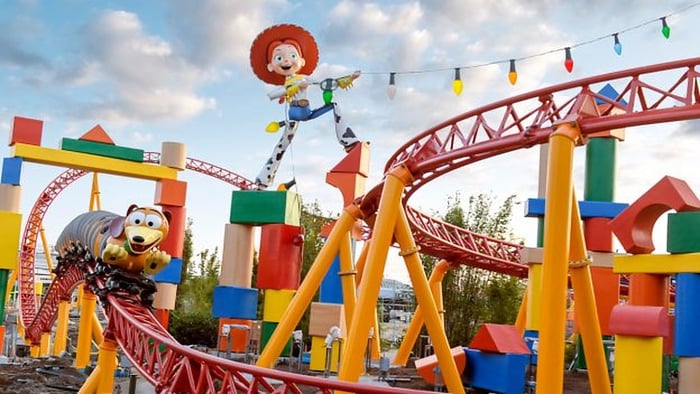 1. Momentum is on Disney's side

Attendance has been sluggish at Disney World for the past two years, but there was noticeable improvement in the media behemoth's latest quarter. Disney's domestic parks entertained 6% more guests than they did during the prior year's fiscal first quarter, and with guests spending more in admissions and in-park spending, the segment experienced double-digit percentage gains in revenue and operating income.

There were a couple of factors leading to the 6% increase in attendance, Disney's strongest year-over-year gain in years. Hurricane Matthew's arrival in 2016 resulted in park closures and travel cancellations during the prior-year period. The opening of the Avatar-themed expansion last year continues to drive traffic, though the comparisons will get harder once we hit Memorial Day weekend this time around.

2. The economy is holding up

Political jockeying for bragging rights aside, the economy is in pretty decent shape. The Consumer Confidence Index is at its highest level since 2000, and if folks feel secure about their financial well-being, they're that much more likely to spring for a Disney vacation. Regional amusement park operators are hoping they strike it rich, too.

There's more to Disney's business than just drawing stateside families to its gated attractions. Disney needs foreign visitors to hit up the House of Mouse, and while geopolitical tensions will come and go, it's a good thing for Disney that many see the euro strengthening against the dollar. It makes a Disney World vacation more cost-effective when Europeans can get more bang for their currency.

Disney offered some encouraging insight during last month's earnings call, pointing out that reservations booked so far during this quarter were pacing 3% ahead of the prior year despite a reduced room inventory due to conversions and refurbishments at some of Disney World's resorts. The even juicier nugget is that booked rates were trading 13% higher.

Some of the gains may be the result of the earlier Easter holiday this year, falling in late March instead of mid-April. The current quarter is going to be strong between the timing of the Easter holiday and that tail-end of the rookie season for Pandora - The World of Avatar.

The real test will come during Disney's potent summer period, its fiscal fourth quarter that ends in September. Maybe Toy Story Land setting an opening date at the very start of that quarter isn't a case of bad timing after all.