Regional amusement park operators are set to cash in as Disney and Universal lie low in 2018.

The theme-park giants may be saving their biggest expansion projects in years for 2019, but the same can't be said for the regional amusement-park operators. Cedar Fair (FUN 4.53%), Six Flags (SIX 6.17%), and smaller chains are placing the finishing touches on some pretty impressive thrill rides that will open in the coming weeks and months.

Investing in 2018 makes sense. With Star Wars Land not coming to Disney parks on both coasts until 2019, the more traditional amusement parks are doing what they can to encourage travelers to hit up their local attractions instead. It's going to be a big summer for the regional operators if they play their cards -- and their scream machines -- just right. 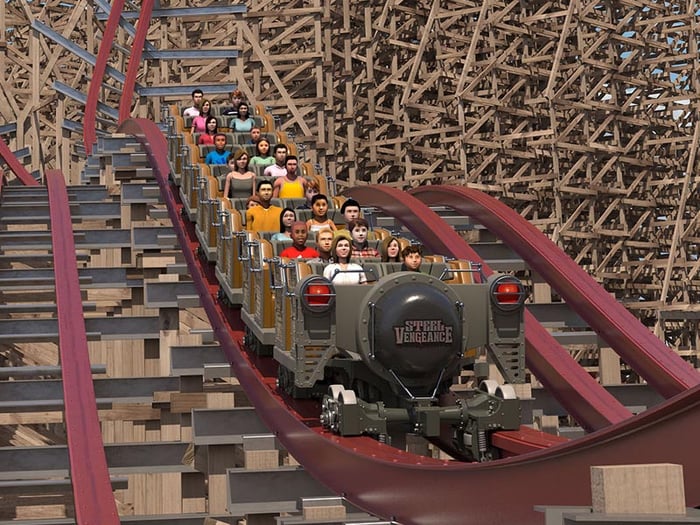 Six Flags and Cedar Fair recently reported financial results, and the market wasn't exactly blown away by the results. Six Flags stock declined 5% on Monday -- on its heaviest trading volume since late October -- after the company posted its fourth-quarter numbers. This is a seasonally sleepy period for regional chains, as many of their parks are closed beyond Halloween-themed events in October.

Revenue rose 7% at Six Flags for the quarter, but more than half of those gains came from an increase in international licensing revenue. An unfortunate footnote is that Six Flags revealed during last week's earnings call that its Six Flags Dubai partner is currently in arrears, a problematic development with the park set to open by late 2019 or early 2020. If we look back at all of 2017 to get a clearer picture of Six Flags, we see a more modest 3% increase on the top line.

Stifel analyst Steven Wieczynski is bullish on Six Flags, even raising his price target from $72 to $78 following the report. He sees last week's post-earnings sell-off as a buying opportunity and thinks the stock was held back as a result of the situation with its Dubai partner, declining per-park attendance in the fourth quarter, and a lack of buyback activity. Sure enough, investors can't feel too bad about Monday's setback, as the stock had hit new highs the previous trading day.

Cedar Fair didn't take a hit after posting financial results a week earlier, but it, too, checked in with 3% revenue growth for all of 2017. Cedar Fair is still trading just shy of the springtime highs it hit just ahead of last year's operating season.

The upcoming operating season should be lucrative for both amusement-park giants. Annual pass sales are running 10% ahead of last year, and Cedar Fair and Six Flags will be home to the most anticipated roller coasters of 2018. Cedar Fair's flagship Cedar Point park is giving its notorious Mean Streak wooden coaster a facelift, reopening as the record-breaking Steel Vengeance in May. And Six Flags will open a Wonder Woman-themed coaster in Texas.

Analysts see revenue growth accelerating at both Six Flags and Cedar Fair, and there's no denying that the debut of several new coasters is playing a major role in the spike of season pass sales.