Among companies with a global brand presence, Altria Group (NYSE:MO) and Coca-Cola (NYSE:KO) are among the most important in the world. Altria's Marlboro Man is known across the globe, and Coca-Cola's ubiquitous red Coke cans have become a U.S. cultural beacon throughout the dozens of nations where you can find the beverage.

Yet Coca-Cola and Altria also have another thing in common: Their products have come under fire for health reasons. Whether it's the impact of smoking on health or the effect of sugary carbonated beverages in contributing to obesity, the consumer-goods giants have had to deal with adverse criticism while still delivering the growth that investors want to see. Below, we'll look at how each of these companies has done lately, and see whether Altria or Coca-Cola is the smarter pick for investors right now. 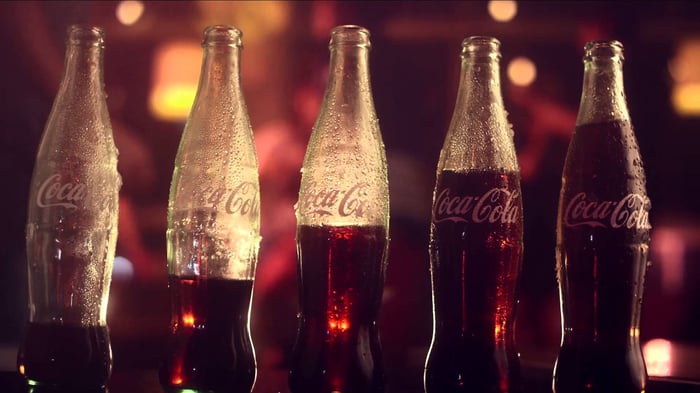 Both Altria and Coca-Cola have gone through struggles lately, but Coca-Cola has done better. Its stock price is up 3% in the past 12 months, compared to Altria's 15% loss since March 2017: 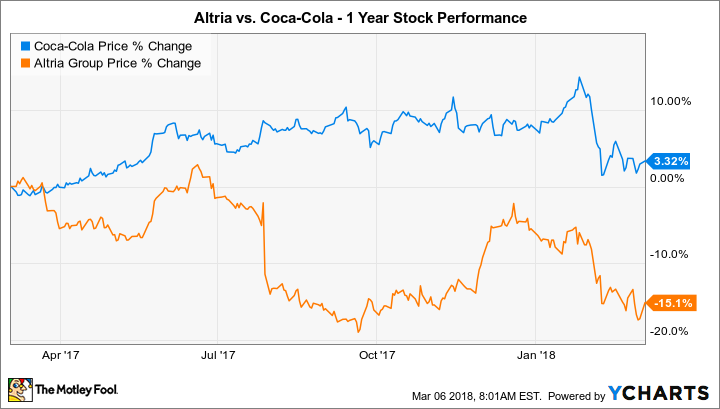 When you try to compare the two companies in terms of valuations, you run into some temporary obstacles in getting clear readings. On a trailing basis, Altria looks a lot cheaper than Coca-Cola, with the tobacco giant having a trailing earnings multiple of 12 compared to the beverage maker's triple-digit showing. Yet the problem is that one-time issues like tax reform and corporate restructuring have distorted GAAP earnings enough to make trailing price-to-earnings ratios not comparable.

If you incorporate future expectations on the earnings front, it makes things a little easier. Coca-Cola trades at almost 20 times forward earnings estimates, while Altria weighs in with a much cheaper forward multiple of 14. Altria's share-price decline has made its current valuation more attractive than Coca-Cola's.

Both Altria Group and Coca-Cola have been solid dividend stocks for income investors, with long track records of paying ample dividends to shareholders. In terms of yield, Altria has the edge right now, with a 4.5% dividend yield topping Coca-Cola's figure by almost a full percentage point.

For those who value dividend growth, both stocks have done an excellent job. Altria just made a 6% boost to its dividend earlier this month, delivering its 52nd payout increase in the past 49 years. Coca-Cola similarly just announced its latest dividend increase of 5%, extending its streak to 56 consecutive years. It's hard to choose between two such distinguished stocks on the basis of dividends, although Altria's higher yield will make it more valuable for those seeking to maximize immediate income.

Growth is tough for large, mature consumer-goods stocks, but both Coca-Cola and Altria are working hard to stay on their game. Coca-Cola has gone through a massive shift by divesting itself of its bottling operations over the past couple of years. Investors have had to get used to a big drop in revenue in recent quarters, but the net result should be a much more capital-light business model that can grow earnings at a faster pace. That will put the onus on Coca-Cola to market its products more effectively, choosing beverages that can gain traction with changing consumer trends, and avoiding drinks that generate controversy among consumers and health advocacy groups. Moves like cutting sugar in its classic cola lineup are important, but the company will also have to look at innovations like optimizing package sizes and adapting existing brands to new markets worldwide. Coca-Cola has plenty of potential for success, but it also faces competition from global beverage players looking to make their own mark on the industry.

Altria hasn't changed things up to the same extent, but the tobacco giant still sees writing on the wall that could demand a more aggressive response. Cigarette shipment volumes continue to fall dramatically, showing the shift in behavior among smokers either toward quitting or toward using alternative products like electronic cigarettes. Altria itself has pursued the e-cigarette market, with its MarkTen product line gaining traction across the U.S. Yet the company will soon go through a leadership transition, and it'll be interesting to see whether incoming CEO Howard Willard will follow the same course that current chief executive Marty Barrington has taken during his years leading the tobacco giant.

Right now Altria Group and Coca-Cola have similar challenges and opportunities. Coca-Cola appears to have a better idea of where it ultimately wants to go strategically, and that could help bolster growth. Yet with advantages both in valuation and in dividend yield, Altria will have broad appeal to income and value investors who see a brighter future in alternative products for the tobacco giant.