The company's latest earnings report is a harbinger of future profitability.

While it hasn't shown up in share price yet, Coca-Cola (KO 2.34%) is delivering on one of its major promises to shareholders, namely, that divestment of bottling operations will result in a leaner, but more profitable, organization. The beverage giant's fourth-quarter 2017 results, released last Friday, demonstrate the significant change occurring on its income statement. Take a brief look at the table of summary numbers below:

I'm not sure the table above does full justice to Coca-Cola's transformation. It's perhaps easier to grasp the organization's evolution by reviewing the same numbers in a more visual format: Refranchising, or selling off bottling operations to bottling partners, has diminished the company's revenue stream. But as planned, a significant exit from manufacturing (the company still manufactures concentrates for its fountains business) has reduced the cost of goods sold, absorbing some of the impact to gross profit.

Cost cutting and productivity initiatives, along with reduced corporate support for bottling operations, have trimmed selling, general, and administrative expenses -- these declined 21% during the quarter versus the prior year. Thus, Coca-Cola lost a full fifth of its revenue, or nearly $2 billion in sales, during the final quarter of 2017, yet walked away with almost the same operating income as the prior year.

An aggressive top-line posture in 2018

Now that it's more of a marketer than manufacturer, Coca-Cola is eyeing higher sales. In the company's earnings release, management disclosed a target of 4% organic revenue improvement for 2018, and executives have previously promised longer-term annual organic revenue growth of 4% to 6%.

These are ambitious goals given how hard it's been for large consumer conglomerates to notch organic growth (that is, reported revenue growth adjusted for acquisitions, dispositions, and foreign currency effects) above 1 percentage point or 2 percentage points in recent years. 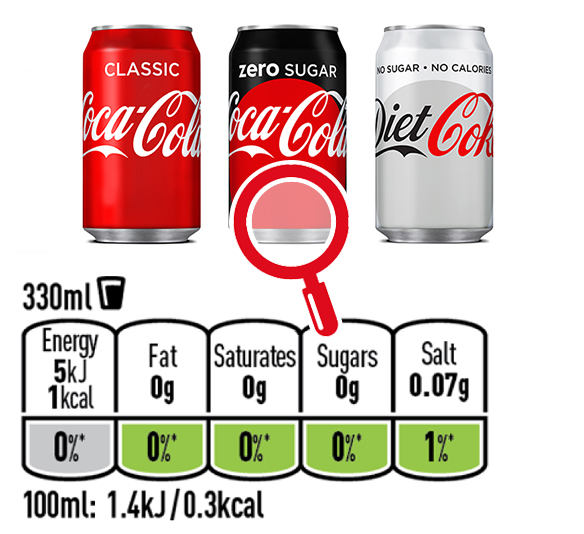 Graphic by Coca-Cola Great Britain, which wants to become the first country in Coca-Cola's system to garner more than 50% of sales from no-sugar or low-sugar products by 2020.

In comparison, competitor PepsiCo (PEP 1.64%), which also recently reported fourth-quarter 2017 results, has projected a full-year organic growth rate "at least in line" with its 2017 growth rate of 2.3%, a much more conservative outlook. This is informed by PepsiCo's caution over changing customer preferences and purchase patterns within the highly competitive beverage and snack market.

How does Coca-Cola believe it can achieve these higher expansion rates? Aside from the company's overriding portfolio diversification strategy, it comes down to a few central themes that management has repeatedly emphasized as of late: favoring pricing power over sheer volume, transplanting brands across continents, and introducing low-sugar beverage variants in its sparkling beverages (soda) category.

In recent quarters, Coca-Cola has shown an inclination to chase higher pricing over volume to bolster its top line. In the fourth quarter, the company reported that organic revenue grew a torrid 6%. Out of this total, 4 percentage points resulted from favorable price and mix trends.

This success is a function of the company's packaging tactics, which favor smaller beverage packages (resulting in a higher price per unit). Coca-Cola honed this strategy in North America, and, on the company's earnings conference call last week, CEO James Quincey noted that revenue growth management initiatives in Europe, the Middle East, and Africa (EMEA) over the past year have focused on "small baskets and pack sizes," and that these package architectures would be rolled out in additional markets in 2018.

Management is also ramping up brand transplants across countries and continents, which it calls a "lift and shift" strategy. Examples discussed during the company's earnings call include the lifting and shifting of two extremely successful U.S. brands, Honest Tea and SmartWater, into multiple international markets. Coca-Cola is presently gearing up to push the products of AdeS, the leading plant-based beverage company in Latin America, acquired in 2017, throughout Europe. A more risk-tolerant culture is enabling Coca-Cola to transfer beverages across borders in modest, iterative tests, versus the expensive, wide-scale launches of just a few years ago.

Finally, the company is following up on the success of last year's Coke Zero Sugar launch by expanding the beverage into 20 new markets in 2018. Marketing low-sugar carbonated soft drinks has become a significant front in Coca-Cola's battle to stem the tide of weaker soda sales, alongside product rehabilitation, such as the January 2018 introduction of four new millennial-friendly Diet Coke flavors.

Given the initiatives to realize pricing and propagate high-potential beverages across borders, Coca-Cola simply needs to hold its soda volume steady for its non-sparkling portfolio to deliver most of its 4%-plus organic revenue growth goal. As can be inferred from the chart at the outset of this article, hitting top-line targets will accelerate earnings. With a much smaller manufacturing footprint, Coca-Cola is poised to send a significantly greater share of each sales dollar to the bottom line.