Bitcoin (BTC-USD) was one of the hottest stories in the financial markets in 2017, and its success was just the tip of the iceberg for the broader cryptocurrency market. As well as bitcoin did last year, though, ripple (XRP-USD) did even better, and many investors in the space are taking a closer look at the bitcoin alternative as a way to diversify their cryptocurrency exposure or look for even greater potential gains.

As cryptocurrency investing has gotten more popular, it's become increasingly important to know as many facts as you can about the tokens in which you want to invest. With that in mind, here are some facts about ripple that even some successful bitcoin investors don't know. 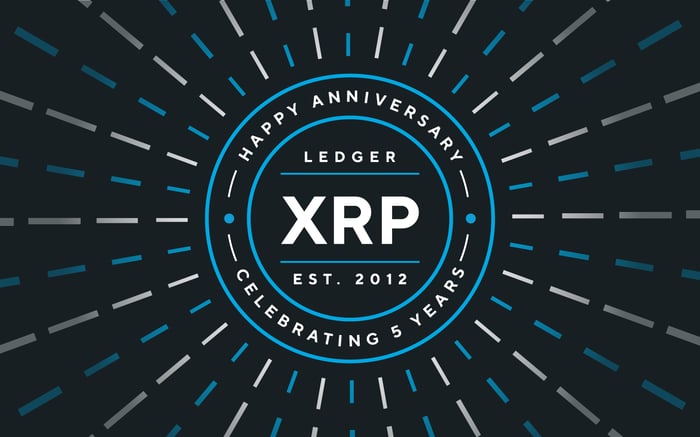 The word "ripple" rolls off the tongue, making it an attractive name for a cryptocurrency. The name of the company behind the token is Ripple Labs, having changed its name from OpenCoin in 2013, and its website generally uses ripple to refer to the global network that the company has established to allow financial institutions to process customer payments across the globe.

Yet the actual digital asset associated with Ripple Labs is formally called XRP. The token is used as part of the ripple network. Yet since it's easier to say than a three-letter acronym, calling the cryptocurrency "ripple" is likely to stay popular well into the future.

2. You can use the ripple network without owning XRP

With some cryptocurrencies, having a token is an essential element of whatever service gets provided. That's not the case with ripple. Financial institutions can use the ripple network without using any XRP at all, and simply becoming part of the network offers access to instant, reliable, and cost-effective customer payment capabilities.

3. Ripple Labs owns more than half of the total possible supply of XRP

As of early 2018, Ripple Labs owned about 60 billion XRP out of the total possible supply of 100 billion XRP, giving it a roughly 60% stake in its own cryptocurrency. Some have noted that this effectively centralizes control of XRP within the Ripple organization. That doesn't sit well with some crypto advocates, many of whom point to other tokens with explicitly decentralized management.

Ripple Labs has noted that even in situations in which the infrastructure of a cryptocurrency has no explicit central control, a small number of major players in bitcoin and other major tokens have practically attained status as an oligopoly. Moreover, as you'll see below, Ripple Labs thinks that its plan for controlled release of XRP gives it an advantage.

4. More ripple supply is set to come onto the market every month

At the end of 2017, Ripple Labs put 55 billion XRP into escrow, setting up 55 separate escrow contracts. Over the next 55 months, these contracts will expire at a rate of one per month, freeing up as much as 1 billion XRP into the market. If Ripple Labs doesn't use all of the month's supply of XRP, it will get put back into escrow, with a new expiration date that will push the eventual end of all the escrow arrangements back by an additional month.

Ripple Labs says that its average monthly use rate in the past 18 months has been about 300 million XRP. That could make the escrow take 15 years or more to finish, and that should allay concerns about dumping tokens onto the market in a way that could cause their value to crash.

5. Ripple used to provide its own XRP wallet

Early on, Ripple provided a website that allowed people to buy, sell, trade, and store XRP. The RippleTrade.com website acted as a digital wallet for XRP transactions.

In early 2016, the company chose to discontinue that service. Ripple Labs worked with third-party wallet provider GateHub to migrate accounts away from RippleTrade. Users could choose other providers if they wished, but for Ripple Labs, the move was designed to allow it to focus on its core work with global financial institutions.

Ripple has seen its popularity jump over the past year, as many investors have just now become familiar with the cryptocurrency and the underlying payment network on which its tokens are used. As speed in global financial transactions becomes more critical, some investors will see ripple as a way to cash in on transformational innovation in the payments industry.