In late 2015, Kinder Morgan (NYSE:KMI) hit a wall. Due to the continued deterioration in the oil market, one of the company's credit rating agencies warned that it could lose its investment-grade credit rating if it didn't do something to get its growing leverage under control. That alert forced the company to take several actions to improve its financial situation.

Those steps have allowed the company to push its leverage ratio down toward its target level. However, despite all of this progress, shares of the pipeline giant have remained under pressure and are down by 25% in the past year even though cash flow remained stable. One reason for the weakness could be that its current leverage target, while an improvement, is still too high compared to peers. 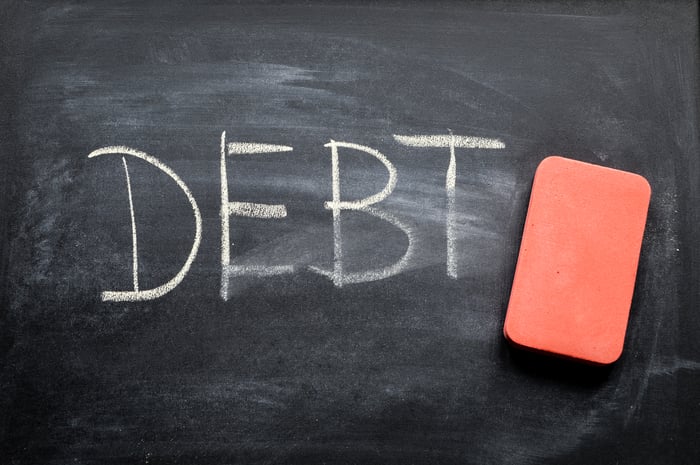 Slowly stepping away from the precipice

It was toward the end of 2015 when Kinder Morgan teamed up with infrastructure giant Brookfield Infrastructure Partners to increase their ownership in the Natural Gas Pipeline Company of America, which was a deeply indebted pipeline joint venture. However, in taking joint control of the $3.4 billion pipeline company, Kinder Morgan had to consolidate its share of the entity's debt. That pushed Kinder Morgan's leverage ratio to an unnerving 5.9 times debt to adjusted EBITDA, causing Moody's to warn that it might downgrade Kinder Morgan's credit rating if it didn't get that number below 5.8 times. However, the credit rating agency also hinted that a sub-5.0 level could win it an upgrade.

Kinder Morgan took immediate heed of that warning and slashed its dividend 75%, which allowed it to fully fund capital spending within cash flow while freeing up additional cash to pay down debt. That bought it some time to continue driving down leverage, which it did over the next year. As a result of those actions, Kinder Morgan has reduced debt by nearly $6 billion since 2015 and ended last year with a leverage ratio of 5.1, which is what it expects for 2018. Because the company hit its target, it's comfortable returning more cash to investors this year, including plans to boost its dividend 60% and buy back some of its stock. 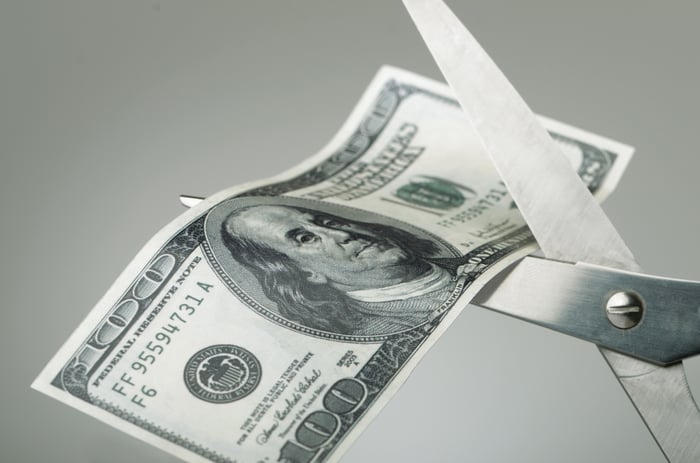 Why it might want to consider cutting debt further

That said, the market still doesn't seem all that enthralled with Kinder Morgan's progress. That's evident by looking at its valuation, which is at the bottom of its peer group: Shares cost eight times cash flow while most rivals sell for around 12 times cash flow. One reason for this rock-bottom valuation could be that peers have even lower leverage targets.

ONEOK (NYSE:OKE), for example, recently accomplished its goal to get its leverage ratio below 4, which CFO Walt Hulse noted "put us at our target a year earlier than we expected." While he did say that he expects the leverage ratio to rise as the company reaches the later stages of construction on some of its expansion projects, he stated: "[W]e continue to view four times or less, as an important target for ONEOK in the long term." That lower leverage ratio could be one reason why ONEOK has one of the highest valuations in its peer group at more than 15 times cash flow.

Canadian pipeline giant Enbridge (NYSE:ENB), on the other hand, has been under some pressure to get its leverage ratio lower, which has weighed on its valuation, pushing it down toward nine times cash flow. The company initially anticipated that in-process expansion projects would slowly drive its leverage ratio from more than 5.5 last year down to less than 5 by next year. However, Enbridge recently announced efforts to accelerate this progress, including selling as much as 3 billion Canadian dollars ($2.3 billion) in assets this year. As a result, Enbridge expects its leverage ratio to reach 5 by the end of this year and trend toward 4.5 by 2020, which it hopes will relieve some of the pressure its debt level has had on the stock price over the past year.

Meanwhile, several pipeline MLPs have set their sights on getting leverage below 4 times. Plains All American Pipeline (NASDAQ:PAA), for example, announced a de-leveraging plan last August. That strategy will see the company pay off $1.6 billion in debt by early next year so that it can get its leverage ratio down from 4.8 to its target level of 3.5-4. Plains All American Pipeline is one of several MLPs to set its sights on that lower level since rivals with sub-4 leverage ratios tend to sell at premium valuations.

While Kinder Morgan has more than appeased the credit rating agencies with its leverage reduction efforts, investors apparently want more. That's not all that surprising, as many of its peers have set their leverage targets much lower. Kinder Morgan would likely benefit from fleshing out its vague promise to "de-lever the balance sheet further" by putting firm numbers and a timeline on a plan that will drive that number down quickly. That would help increase investor confidence in the company's long-term sustainability and might finally lift the weight that has been holding down the stock price.