The software giant is quickly catching up to the fast-growing startup.

Slack, a software company focused on workplace messaging, is one of the hottest tech start-ups today. The company last raised money in September at a $5.1 billion valuation. At the time, it sported 6 million daily active users and more than 50,000 paying teams.

Those numbers certainly got the attention of Microsoft (MSFT -2.03%). Office productivity software is a space that Microsoft dominates, but Slack's rapid growth is an indication that there was plenty of room for improvement when it came to messaging. Alphabet's (GOOG -2.56%) Google has failed to put a serious dent in Microsoft's Office empire. But Slack found a hole and exploited it.

Microsoft launched Teams, its answer to Slack, last year. The product hit its one-year anniversary on March 12, and it's clear that Microsoft is making major progress in its battle for workplace messaging dominance. 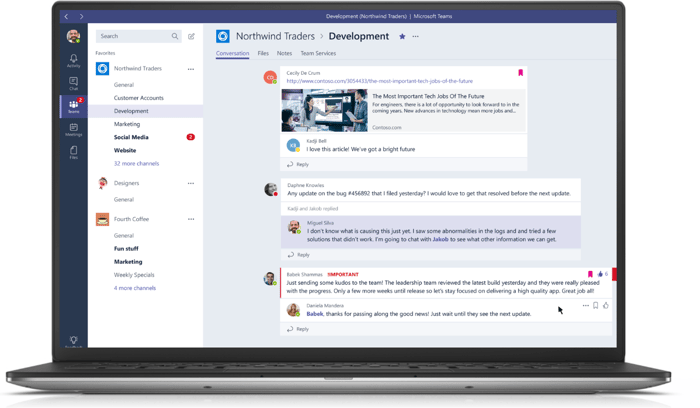 In a blog post on Monday, Microsoft provided an update on Teams to mark its one-year anniversary. Teams is now in use at 200,000 organizations in 181 markets, with big-name users including A.P. Moller-Maersk, Macy's, and General Motors. That's up from 125,000 organizations in September.

Slack offers a free plan, with two other plans priced at $6.67 and $12.50 per month. For any business that already uses Microsoft Office 365, using Teams over Slack is a no-brainer, even with Slack being a more mature product. For businesses using alternative productivity software, like Google's G Suite, Office 365 with Teams and Slack are both priced in the same ballpark.

Office 365 has about 120 million users. Nearly 30 million of those users subscribe to the consumer product, and the rest are commercial users. The path of least resistance for an organization that uses Office 365 and wants to start using a messaging app is to choose Teams, because it costs them nothing. That's a massive advantage for Microsoft.

Microsoft's update comes about two weeks after Google doubled down on workplace messaging. Google announced an update to its Hangouts chat tool on Feb. 28, bringing the new Hangouts Chat to G Suite plans. Hangouts Chat aims to be a Slack alternative, with support for messaging across devices between workers and group conversations.

For Microsoft, Teams is another service that makes Office 365 more sticky and a better value for organizations. The more Microsoft products a company relies on, the less likely that company is to go through the process of switching to alternatives, especially if the company is large. The same is true for Google and Google products.

Slack's impressive growth has roused both Microsoft and Google into action. Teams is already bigger in terms of paying organizations than Slack, although Slack's numbers are about six months stale. Google's G Suite hit 3 million paying businesses in early 2017, and Hangouts Chat is likely to be an easy choice for those users.

Slack is still a threat to Microsoft, but the tech giant has proved that it can go toe-to-toe with the nimble start-up.