Zagat was once the first name in restaurant reviews. Restaurants angled for a spot in the pocket-sized guide, and any diner worth their salt had one on his or her shelf.

Perhaps it made sense, then, that Alphabet (NASDAQ:GOOG) (NASDAQ:GOOGL), which considers its mission to organize the world's information, acquired the company in 2011 for $151 million. It's what's happened since then that's harder to understand.

Last week, Alphabet sold the review brand to the Infatuation for an undisclosed amount, but it probably wasn't much more than peanuts. The search giant's sordid odyssey is the latest reminder that the company struggles when it tries to expand past search and advertising, and that its acquisition strategy is often misguided. 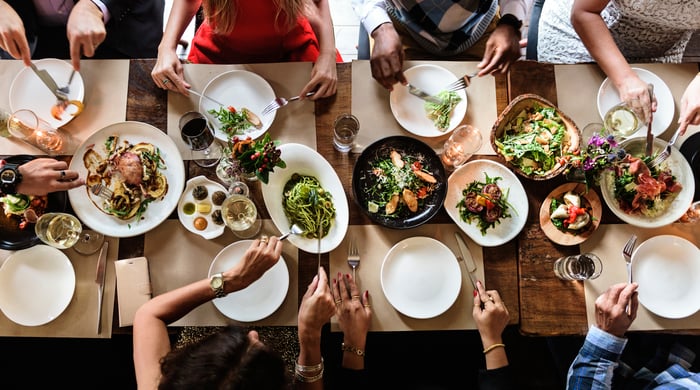 A melange of mismanagement

The Zagat acquisition was spearheaded by Marissa Mayer. In 2011, she was the Google executive in charge of maps and saw the restaurant guide as a value-add for her division. However, Mayer left in 2012 to head up Yahoo, and Zagat seemed to spiral into irrelevance.

Its app release in 2013 was dismissed by critics for a poor interface and moving away from the brand's historical strength in reviews, and Alphabet ultimately ended up favoring its own recommendations over Zagat's. The search leader never gave Zagat sufficient resources and harvested what talent stayed at Zagat over the years. It also made poor strategic decisions, and last year, didn't release a guide. Given how low the brand has fallen, a sale may have been the only way to save it.

For years, Alphabet has angled for a piece of the recommendations business, offering to buy Yelp for $500 million in 2009 and Groupon for $6 billion in 2010. Alphabet can be glad that the latter was rejected, as Groupon is worth just $2.5 billion today.

These struggles underscore the other problems the company has had in trying to move beyond its core search business. Other acquisitions also have disappointed.

In 2014, Alphabet acquired Nest for $3.2 billion, which seemed like an excellent play for the smart-home market, but two years after the acquisition, Nest's CEO was forced out and the company delivered little in the way of innovation. Today, Amazon, with its voice-activated Alexa technology, is widely considered to be a leader in the smart-home market and looks set to extend its lead with its recent acquisition of smart-doorbell-maker Ring.

Alphabet acquired Motorola Mobility for $12.5 billion in 2012, and then sold it to Lenovo for $2.9 billion in 2014 because the tech giant was unable to turn the handset brand into the foundation of its own smartphone business.

In search of a strategy

Alphabet's search business is so profitable that the company can afford to spend billions of dollars on "other bets," which include its Waymo autonomous-vehicle division, Nest, Google X, Google Fiber, and others. However, unlike its peers, the company seems to have no coherent strategy uniting its various business experiments and divisions.

Amazon has cleverly tied together disparate businesses with its Prime loyalty program, and almost every one of the company's inventions seems designed to make ordering on its website easier. Its cloud-computing division has been so profitable that it needs no justification.

Facebook has built a fortress in social media with the acquisition of Instagram and WhatsApp, which offer ample opportunities for monetization, in addition to its namesake site. And Apple is trying to leverage its installed base of over 1 billion devices into services revenues and extract more profits from higher-priced iPhones. Even Microsoft is clearly focused on the office and the enterprise market with its cloud investments and other moves like the acquisition of Linkedin.

Alphabet's "other bets," on the other hand, don't seem to have a unifying strategy. Excess cash from its lucrative search business could be better spent paying a dividend or buying back more stock. Like Apple and Microsoft, the company is approaching maturity, and investors would be better served by disciplined capital allocation rather than seemingly random experiments.