Amazon.com (NASDAQ:AMZN) made a move to control more aspects of people's home lives last month when the e-commerce giant scooped up app-enabled doorbell manufacturer Ring in a deal that valued the company between $1.2 billion and $1.8 billion.

Ring, which sells a range of connected home security devices, already offers some doorbells and cameras that can connect with Amazon's digital voice assistant, Alexa. It's easy to see how the partnership can expand through smart-home devices and Amazon's robust delivery network. But a key question is, will enough people trust Amazon to send delivery people into their homes when they're away? 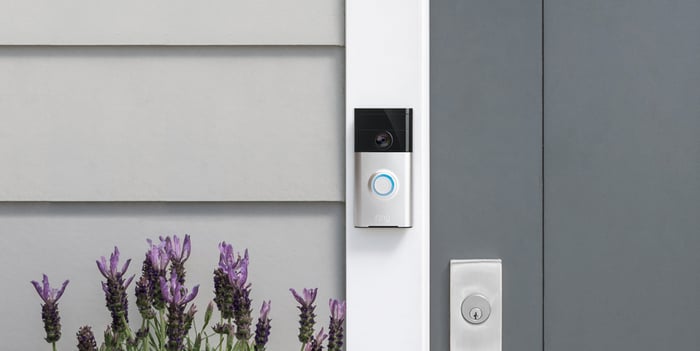 Amazon is thinking ahead with this deal, as the global home security market is expected to reach $51.5 billion per year by 2022, with North America leading that growth, according to Research and Markets. The report says that people will increase their purchases of home security products because of increasing rate of crime, the rise of more affordable security products, the spread of cloud-based technologies, and a growing awareness of security and safety issues.

That type of growth would bode well for the Amazon-Ring partnership, considering Ring's mission is to "reduce crime in neighborhoods." This is particularly helpful to Amazon, considering it's had problems with package theft.

Amazon has tried to reduce the number of thefts by using package lockers and Hub pickup spots in certain apartment buildings. However, some areas with particularly high theft rates have lost out on some Amazon same-day delivery privileges. Even before it acquired Ring outright, the company was moving toward smart-door solutions.

Amazon initially invested in Ring two years ago through its Alexa fund, which gives up to $100 million in venture capital funding to encourage voice technology innovation. In December, Amazon purchased home security camera start-up Blink, which is set to release a video doorbell sometime in 2018.

Ring's doorbells have built-in motion detectors that work with a corresponding app, so homeowners can see anyone who arrives on their front steps and can talk and listen to them. Ring doesn't sell smart door locks yet, but naturally, the tech community is speculating about what might happen when Ring has the capability to let people open their front doors to certain people through that app.

If you have Amazon Key installed at your house, a delivery person can use an app on their phone to gain one-time access into your house to place a package just inside the front door. A connected Amazon Cloud Cam records the delivery and sends the video feed to your app, so you can view it and ensure that nothing is stolen or tampered with.

It's hard to imagine many people would be comfortable acting as guinea pigs for this setup.

While Amazon says the Amazon Key program only uses its most trusted contractors, who have been through a thorough background check, it's not natural to allow a stranger to access your home when you're miles or even states away. If a delivery person damages your property in some way, Amazon says it will correct the problem so long as the homeowner can provide evidence.

But although Amazon is often lauded for its speedy and reliable delivery, particularly for Prime members, Amazon Key hasn't exactly had glowing reviews so far.

Washington Post tech columnist Geoffrey Fowler did a trial run of the Amazon Key setup in December and summarized his experience in an article titled "Amazon Wants a Key to Your House. I Did It. I Regretted It." He also complained about faulty equipment that caused his door to jam.

Fowler added that while it's nice knowing your packages are safer inside your house, "the trade-off is giving more power over your life to a company that probably already has too much."

Why Ring and Amazon Key are a big deal

Amazon may need a few years to perfect the Amazon Key and the various smart lock and doorbell systems from Ring and Blink, as well as to persuade homeowners that this is a safe and convenient way to protect against package theft. But that's not unusual.

When AirBnB and Uber debuted, people were sure that no one would want to stay in a stranger's house or get in a stranger's car. Now, many people don't think twice about doing those things.

Once Amazon established its keyless delivery system, Pandora's box could be opened. When a company can gain a customer's trust enough so that its allowed to enter their home, that's a steep slide into a pile of gold for that company. For Amazon, the possibilities are endless as to who it could send into your home when you can't be there, including dog walkers, technicians, or Whole Foods grocery deliverers.

Amazon is already talked about as an impossibly big conglomerate, but it's laying the foundation for an even bigger future for itself.