Wall Street thinks pretty highly of Biogen Inc. (NASDAQ:BIIB). Of 32 analysts covering the biotech who were surveyed by Thomson Reuters, eight rated Biogen as a "strong buy," with another 13 viewing the stock as a "buy." The remaining 11 analysts recommended holding Biogen stock. None saw the stock as one to sell.

So far in 2018, Wall Street's optimism hasn't proven to be warranted. Biogen stock is down more than 10%, while exchange-traded funds that track biotech stocks are in positive territory. However, poor short-term performance doesn't necessarily mean that Biogen isn't a good stock to own over the long run.

Is Biogen a buy? It depends on the answers to these three questions. 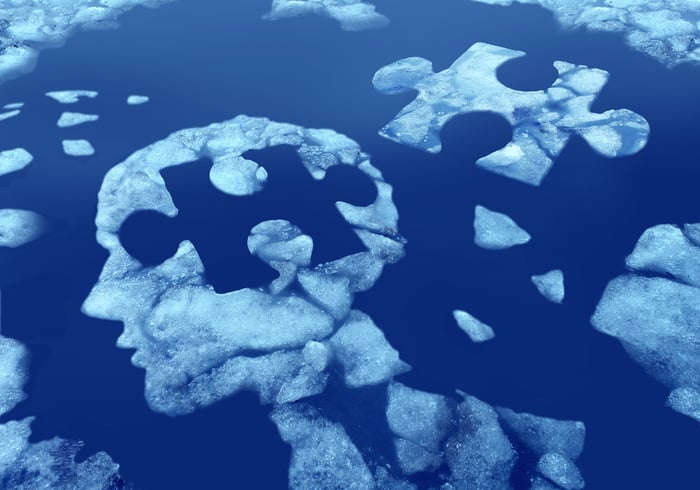 1. Will aducanumab be successful?

If aducanumab proves to be successful in treating Alzheimer's disease, the case for buying Biogen stock is rock solid. The experimental drug is the No. 1 most valuable pipeline asset in the biopharmaceutical industry, according to market research firm EvaluatePharma. Peak annual sales of $12 billion -- and perhaps even more -- should be achievable if aducanumab wins regulatory approval. But for now, that's a big if.

Several seemingly promising Alzheimer's disease drugs from other drugmakers have made it to late-stage clinical studies, only to ultimately fail. While aducanumab showed significant potential in earlier studies, Biogen's recent announcement that it was expanding the number of patients in a phase 3 study because of greater-than-expected variability in the primary endpoint caused concern among investors.

Biogen also has another monoclonal antibody targeting amyloid plaque deposits, as aducanumab does, in a phase 2 clinical study. In addition, the biotech claims a couple of early stage candidates that target tau protein deposits. But for now, aducanumab is Biogen's best hope in treating Alzheimer's disease -- with much of the company's future fortunes riding on this one drug.

2. Can Biogen hang on to its multiple sclerosis market share?

While treating Alzheimer's disease could be the most important key to Biogen's future success, the company currently relies largely on its multiple sclerosis (MS) franchise. Last year, the biotech's MS drugs generated sales of nearly $9 billion -- more than 70% of Biogen's total revenue.

The problem for Biogen is that its MS lineup faces increasing competition. Roche's Ocrevus won regulatory approval in the U.S. in 2017 and in Europe earlier this year. The drug is already taking some market share from Biogen's Tecfidera and Tysabri, with more market erosion for Biogen's current MS drugs probably on the way.

Biogen received some good news, with the FDA sending a refusal-to-file letter to Celgene for its New Drug Application for ozanimod in treating MS. Ozanimod is still expected to eventually win approval and present a significant challenge to Biogen's MS drugs, though.

Some help for Biogen's MS franchise could be on the way. The company licensed monomethyl fumarate (MMF) from Alkermes (NASDAQ:ALKS) in November 2017. MMF is currently in a phase 3 clinical study. In addition, Biogen has a promising phase 2 candidate targeting treatment of MS with opicinumab.

3. Will Biogen deal its way into more growth?

The best thing going for Biogen right now stemmed from the biotech's deal-making prowess. In 2012, Biogen partnered with Ionis Pharmaceuticals (NASDAQ:IONS) to develop a drug to treat spinal muscular atrophy. The result of that collaboration, Spinraza, raked in nearly $884 million for Biogen last year.

A key question for Biogen is how effective the company will be at making more deals to drive future growth. Licensing MMF from Alkermes seemed to be a pretty good move to bolster its MS franchise. However, more deals could be necessary. As a case in point, Spinraza appears likely to face competition within the next few years. Avexis has a late-stage gene-therapy candidate targeting spinal muscular atrophy type 1, the most severe form of the disease.

Biogen should be in pretty good shape to make more deals. The company had cash, cash equivalents, and marketable securities totaling nearly $6.75 billion at the end of 2017. Biogen also generated free cash flow of close to $2.6 billion over the last 12 months.

It's too early to know how these three questions will be answered. In my view, the easiest question to answer is the third one relating to deal-making. I think it's highly likely that Biogen will make more deals that fuel growth. However, I'm not sure if that growth will be enough to offset potential negative answers to the other two questions.

My take is that Biogen won't be able to retain its current market share in MS. On the other hand, the decline should be gradual and probably won't cut the biotech off at its knees. Growth for Spinraza should also help offset part of the MS franchise's drop in sales.

The wild card for Biogen is aducanumab. Success for the Alzheimer's disease drug means success for Biogen. Failure would cause the stock to plunge so much that I suspect it would take years for the biotech to recover. In my opinion, Biogen has too much riding on aducanumab for the stock to be a great pick for most investors. There's simply too much risk.

Wall Street's optimism could be right, but that optimism hinges largely on one drug targeting an indication where the landscape is littered with failures. I think there are better biotech stocks to buy than Biogen with more attractive risk-reward propositions.