Clean Energy Fuels (NASDAQ:CLNE) went up against a very tough comparable quarter, which made its fourth-quarter results appear worse than they were. One of the issues related to the timing of when it recognized a tax credit. It was one of several differences between the two periods, which masked the continued improvement in the company's volumes and the progress of its streamlining plan. 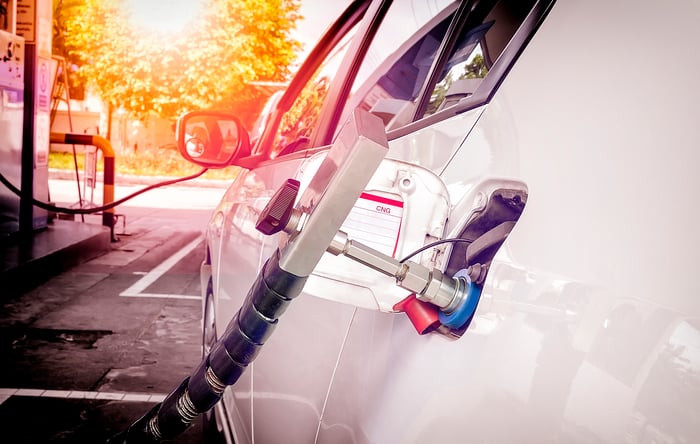 What happened with Clean Energy Fuels Corp. this quarter?

It was a messy quarter, to say the least.

We had a very productive fourth quarter as we completed a variety of actions addressing underperforming stations and putting in place further cost reductions as well as completing the combination of our compressor business with Landi Renzo's SAFE.

Last quarter was an important one from a strategic standpoint for Clean Energy Fuels. It quickly moved forward with the plan it outlined in the third quarter to streamline operations. This strategy, which included closing 42 underperforming and unprofitable stores as well as making progress on its aim to reduce selling, general, and administrative expenses by $15 million, managed to cut that number by $5 million last quarter. Furthermore, the company found a partner to take over its compressor business and drive it to the next level.

Littlefair also pointed to what lies ahead.

We believe we are well positioned for 2018 with these actions in place, as well as AFTC revenue for 2017 fuel sales, all of which we will recognize this year. We also see continued volume growth, driven by increased acceptance of our environmentally friendly, cost-effective and proven alternative fuel solutions.

As the CEO noted, last year's headwinds should shift into tailwinds in 2018. Not only will the company be able to recognize all its AFTC revenue this year, but it should benefit from the streamlining plan it put into action last quarter. That said, Clean Energy Fuels still expects to lose $20 million to $25 million this year, though that would be an improvement of more than $50 million from 2017.