Natural gas refueling station builder and operator Clean Energy Fuels Corp. (NASDAQ:CLNE) has proven a difficult company for many investors to follow and measure. With a regular history of reporting GAAP losses and revenues that can be up or down from quarter to quarter, it can be easy to just assume it's a money-losing venture with weak prospects. When you add in that its business is selling natural gas as a transportation fuel alternative to gasoline and diesel while renewables such as electric and hydrogen get all the press, it's been a difficult road for investors over the past few years.

However, because of the nature of the company's business, revenue and even GAAP earnings results don't tell the whole story. To be frank, they can actually take a relatively good quarter and make it look like a garbage fire -- and that's exactly what happened when the company reported third-quarter results on Nov. 2 after market close. Let's take a look at what's happening with the business, five numbers investors need to be aware of, and the ones that matter the most. 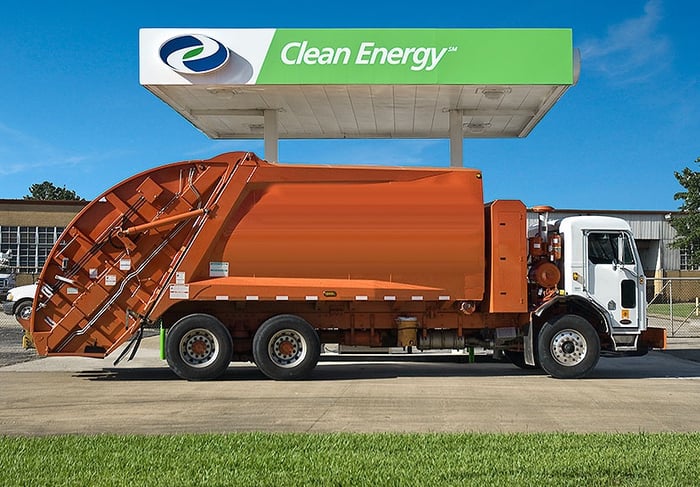 The net loss and station closings

Needless to say, a $94 million net loss -- that's bigger than revenue -- isn't easy on the eyes. It's also a number that the average retail investor is probably reading the most about. The other number -- 42 stations Clean Energy is closing -- is also getting a lot of attention. Let's examine them both.

The company announced it was closing 42 unprofitable stations and also making some staffing changes, at a cost of $70 million in noncash and $3.9 million in cash expenses.

Some of these stations are as much as 20 years old, cannot facilitate large vehicles, and are not located near major transportation corridors. Five are newer stations aimed at heavy-duty trucks in the Colorado mountains where none of the currently available natural gas engines generate the horsepower to operate well. When the stations were opened, natural gas engine expert Westport Fuel Systems (NASDAQ:WPRT) made a 15-liter engine that has since been discontinued without a comparable replacement.

Based on what management said on the earnings call, the station closure is a step that will save money but won't negatively impact fuel sales. CEO Andrew Littlefair said the "vast majority" of the fuel sold at these stations would transition to nearby Clean Energy stations.

That's how much Clean Energy says the moves would lower expenses. Clean Energy is making a one-time $3.9 million cash outlay and writing down $70 million in asset value related to the stations being closed. That should lessen the company's SG&A to around $80 million per year, a 36% reduction over the past three years.

This doesn't include the prior stated goal of paying down more debt. At quarter-end, Clean Energy had $197 million in cash, $255 million in total debt, and a $17 million per year run rate for interest expense. Based on previous management comments, interest expense could fall another $8 million to $10 million per year over the next several quarters.

Combined, that's as much as $28 million in annual expense reduction based on the recent actions and expected lowering of near-term debt. In other words, the balance sheet shrank due to the $70 million asset impairments, but the company's liquidity and cash flows will be improved.

Cash flows are an important measure of any company, and especially for one like Clean Energy with large GAAP losses that can mask its operating results. Current assets minus current liabilities, or working capital, is a great starting point. Clean Energy's working capital fell by $23 million from the second to the third quarter, but $25 million of its debt shifted from long-term (due in more than 12 months) to current (due within 12 months) in the quarter, while total debt was unchanged. Since this debt wasn't a new liability -- it just moved into a different bucket on the balance sheet -- the company's working capital situation didn't really weaken.

Cash flows have improved for Clean Energy and have been generally positive since the start of 2016 on a trailing-12-month basis. Operating cash flow was $443,000 in Q3, an improvement from negative $6.7 million in the second quarter, but still barely above water and well below last year's results. But the company saw a $25 million positive cash flow benefit from a federal excise tax credit (called VETC) in 2016 that expired at year-end and has yet to be renewed.

In summary, it would seem that management has a goal of getting the company cash-flow positive even without the benefit of VETC going forward, though they remain optimistic it will be reinstated.

Since fuel prices are very volatile, but per-gallon margins are generally steady, volume is a better measure of growth than revenues, and fuel volume deliveries have grown 8%-12% annually even through the oil downturn. And even with plans to close those 42 stations (which weren't growing volumes), the company expects to continue to generate similar volume growth by building new stations in areas where demand is high.

If we do a little bit of extrapolation, cash flows are set to improve even further heading into 2018. In addition to the $18 million in savings just announced, interest expenses could fall by $10 million next year, too. Cash flows are also set to grow going forward. At the stated target of $0.25-$0.29 per gallon in gross margin, Clean Energy would generate between $7 million and $12 million in incremental gross margin dollars in 2018 based on its anticipated growth rates. Putting it all together, Clean Energy Fuels could see its cash flows improve by as much as $40 million, or almost $0.27 per share, in 2018.

Will the company be able to deliver that big of a swing in its cash flows over the coming quarters? Only time will tell. Stay tuned. I'll be watching very closely how Clean Energy executes and how its operating costs, cash flows, and growth rates change in the coming quarters.

Editor's note: A previous version of this article stated that Clean Energy's operating cash flow in the third quarter was negative $6.7 million. It was actually positive $443,000. The Fool regrets the error.